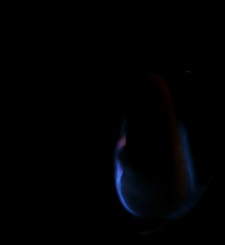 A lit sugarloaf; be aware that the flames are barely visible!

A „Feuerzangenbowle“ is a traditional German alcoholic drink for which a rum-soaked sugarloaf is set on fire and drips into mulled wine (see Wikipedia). It is quite similar to another popular hot alcoholic beverage called "Glühwein".

Thanks to its unique, sometimes very dry humour this movie has since become a real German classic and it is especially popular among students. 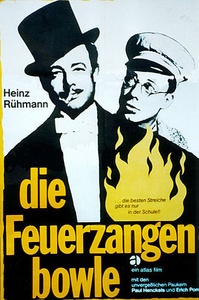 And why am I telling you all of this?

Because we have a huge Feuerzangenbowle – Event in Aachen every autumn during which the students come together in the university to watch this cheerful, old classic and have some Feuerzangenbowle themselves. The movie is being shown in many different lecture halls at different times of the evening. All of this is being organized by our university cinema club “filmstudio”.

After the film all students go out to have even more Feuerzangenbowle in a pub in Pontstraße or on private parties at home.

If you want to see the movie in the university, be sure to buy your tickets from filmstudio many days in advance because they are sold out quickly. There is a gala-screening in the Aula in our main building during the late afternoon with a nice supporting programme and this screening is more elegant and well-mannered than the other screenings.

You do not need to worry that you might not understand the film even if you are not fluent in German. The basic storyline is not very complex and the film mainly benefits from visual and situational comedy. That is also the reason, why the German students do not mind to see it again and again every year.

Do you want to organize your own Feuerzangenbowle party? Read our recipe.