Baumann's House and Store replaced an earlier structure in 1887.  It was the first house in Hahndorf to be designed by an architect.

This combination of house and store was built by a German family when their hard work had been rewarded with a measure of prosperity.  The Baumanns chose a style of architecture popular in Adelaide in the late 19th Century and engaged an architect to draw up the plans.  This was a remarkable occurrence in a rural village where buildings were erected in the traditional style of the Prussian homeland by tradesmen or the farmers themselves, without help from professional designers.  Contrasting markedly with Hahndorf’s earlier structures, the new house and store were a sign that a process of assimilation into a middle-class British way of life was gradually taking place.

The building was completed in 1887 for Christian Baumann and his wife Mary (christened Marie).  She was born into the well-known Temme family of Springbank, which operated a bluestone quarry that supplied stone for many Adelaide buildings including Bethlehem Lutheran Church.  They also had a market-garden in the foothills.  My own refugee family once lived in a migrant hostel nearby, a mansion called “Mitcham Lawn.”  By chance, my future mother-in-law Hazel happened to be Mary’s grand-daughter.  She had looked after Hazel while she attended school in Adelaide and had brought her to visit relatives in Hahndorf during holidays.  Thinking back to my own childhood escapes from the crowded hostel to pick wild lilac up on the hill behind the Temme homestead which then housed the Mitcham Dogs Home, Hazel’s favourite saying came to mind, “It’s a small world.”

Christian Baumann had completed an apprenticeship as a draper before coming to Australia in 1877 in the “Peter Godeffroy.”  He had married Mary in 1881.  By 1883, he had bought August Meyer’s drapery business at 63 Main Street, Hahndorf.  In three years the business had grown to allow for the grand new building to take shape.  Christian and Mary continued running the store and taking part in community life until 1905 when they moved to Eastwood.

The couple had nine children.  The eldest was Hermine Emma Elise, called Minnie, born in 1882.  She married Gottfried Eduard Paech, generally known as Ted, in November 1905.  Their first child Hazel born in 1906, was followed by five others over nineteen years.  A tiny widow aged 83 when I met her, Minnie had a remarkably straight back, a keen eye and a sprightliness that belied her years.  As a small girl she had taken part in planting Hahndorf’s avenue of trees in 1885.  Her great-uncle, Rebensberg vigneron Eduard Schroeder, had been the originator of the scheme, and like the rest of their large family circle, the Baumanns joined in the celebrations.  It must have been truly memorable, for Minnie instantly burst into the tree-planting song composed for the occasion by Teacher Ey at the Lutheran School –

“Happy are we today. Bells are ringing, birds are singing ….”

Knowing that Mr Ey’s students had sung in German that day I asked why she sang in English.  She replied, “Paechs went to the Lutheran school.  Baumanns went to the public school because Mr. Ey spent too much time in the pub.  Parents paid four pence for each child in Grade 1, six pence for Grade 2.  No-one stayed in Grade 1 for long!”

It was a wry comment on her parents’ view of the parish school.  Dependent solely on financial support from parents and St. Michael’s congregation which controlled curriculum content, instruction was mostly in German.  Memories of meddling by King Friedrich Wilhelm III in their spiritual lives in Prussia meant that Lutheran congregations never sought State Aid for their schools, no matter how difficult it was to pay the teacher’s salary.  Schools receiving Aid were forbidden to teach religion, a major reason why congregations set up their own systems of education.  Furthermore, State Aid was dependent on the efficiency of the school determined by inspectors and the number of students reaching the State Standard.  Teachers’ salaries were dependent on exam results in public schools.

To ensure that they learned to speak English without a German accent, the Baumann children were all sent to Hahndorf Public School.  Two boys also attended Mr. Byard’s Hahndorf College.  Minnie studied French and music at a finishing school for young ladies before she married Ted.  Two of her brothers, Walter Oscar aged twenty-five and Oscar Eric aged nineteen, enlisted in the Australian Imperial Forces in 1915 to fight against Germany in World War 1.  Walter anglicised his surname to Bowman.  Oscar was killed in action in France in 1916, but Walter survived active service in that country to return home to his family in Australia.  My drawing is based on a faded photograph taken before Main Street was sealed.  In recent years the building has housed an excellent Chinese restaurant. 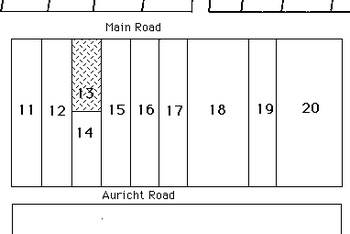