In 1865 M.C. (Carl) Bom, a Danish sailor aged 19, jumped ship in Port Adelaide and found his way to Hahndorf.  In 1866, he started Bom's Monumental Marble Works.  The business grew to be  the largest of its kind in the Southern Hemisphere, with branches later opened in Strathalbyn, Mount Gambier, and Adelaide..

Carl Bom jumped ship in Port Adelaide in 1865.  Until it sailed, he managed to stay in hiding, chiselling a slate slab for Mr. J.C. Altmann of Hahndorf who had befriended him.  This was the beginning of this Dane’s life in Hahndorf that eventually led him to open “Bom’s Monumental Marble Works” in Main Street.  The business grew to be “the largest of its kind in the Southern Hemisphere”, according to the S.A. Register and Adelaide Observer of 1882.  Branches were opened at Strathalbyn, Mount Gambier and Adelaide.  The name changed to “Schubert and Bom” when his son-in-law Johannes Heinrich Schubert became a partner.  After Bom’s death in 1911, the name was changed to “Schubert and Sons” and is still in business in Adelaide.

Very popular and active in community affairs, Mr. Bom was elected to the district council and was chairman for four years.  His talents were many.  The first to import the famous Carrarra marble from the quarries of Italy, Carl Bom was also adept at using local stone.  In 1885, he constructed the walls of St. Paul’s Church of England in English Street.  He was a skilled painter of coaches and wagons.  The Australian landscapes painted on the stage flats at the Hahndorf Institute are attributed to him.  A keen marksman, he was the King of the Shoot many times at Hahndorf’s annual Schuetzenfest held on 28 December.  Just before he died of peritonitis, the Schuetzenfest procession of competitors stopped outside his house to honour him.  Mortally ill, Carl Bom left his bed to stand to attention on the verandah while the band played.  As a memorial to him, the villagers erected a large garden seat which is still in use at the old Lutheran school in the main street.

Mr. Bom’s sister also had a premature end.  After her fiance had died in an accident, Camille Bom came to the colony to join her brother.  On leaving the ship she slipped, fell and was brought to her welcoming brother’s house as a corpse.  Death was a regular visitor to Hahndorf.  When there was no resident doctor, medical help was hours away by horse or alternatively, herbal remedies from the White Witch or village wisewoman.  Some families kept caskets of homeopathic pills despite the church ban on such medication in the early years. 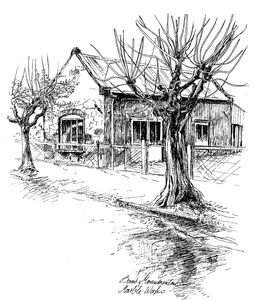 Bom's Marble Works [sketch: AL Fox]One man made sure that he was well prepared when his Lord called.  For many years Christian Herzog kept his coffin complete with gold fringe stored in the attic.  A mark of bravery amongst the young lads of the village was to carry out dares to try the coffin for size in the depths of a moonless night.  They ruined its silken lining while generations of moths were kept fed and fattened by the fancy fringe.  Mr. Herzog’s tombstone, carved and ready for the big day except for the actual date of death, stood in Bom’s yard for so long that a special shelter had to be built over it.  Having donated a fine horse-drawn hearse for use by the villagers, Mr. Herzog breathed his last and was the first person to be carried to the cemetery in style.  The hearse was an example of Carl Bom’s skills as a coach painter in collaboration with its builder, Alfred Bremer the wheelwright who worked next door at No. 46.  By coincidence, the very last stone carved by Mr. Bom was for his old friend J.C. Altmann’s grave.

Mr. Bom’s house and workshop were occupied until 1974 by his daughter, Mrs. Hulda Ey.  Occasionally I visited her with Walter Wotzke to talk about the past and to do radio interviews.  Her mind remained sharp and lively until her death at 96 years.  Much of her life had been devoted to raising funds for community projects by organising concerts at the Institute and local hotels.  She had joined St. Michael’s Church choir aged fourteen and had become conductor in 1911, a role she relinquished forty years later.  Aged eighty-one she came out of retirement in 1959 to conduct the choir for the centenary celebration of the church building broadcast nationally.

My drawing is taken from an old photograph showing the house before it was remodelled.  Carl Bom had bought the property in 1872 from a founding settler, Christian Thiele whose parents and brother Hanfried had also settled in Hahndorf.  Bom’s occupation on the Certificate of Title was given as “coachpainter.”  Today, new uses have been found for the buildings at 50 Main Street.  Unlike some historic places in the village at the time of writing, the space between the house and workshop has not been jammed with new shops. 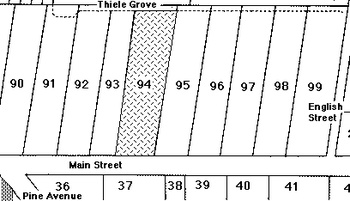