Duncan Macfarlane (1793-1856) - Scottish born Duncan Macfarlane arrived in NSW, Australia in 1824 with his brother James.  They began squatting in the mountains near present day Canberra.  In 1835, Duncan purchased 1200 acres at Goulburn, NSW approx 195km south-west of Sydney.  The brothers also expanded into Port Phillip, Victoria where they ran mainly sheep.

After some financial difficulties, Duncan Macfarlane came to South Australia in 1838 on the brig 'Parland' with his friend, William Hampden Dutton.  In January 1839, together with his partners, William Hampden Dutton and Captain John Finnis, the 4000-acre (1619 ha) Special Survey at Mount Barker was purchased.  It was on portions of this survey property that the townships of Hahndorf and Mount Barker were founded. 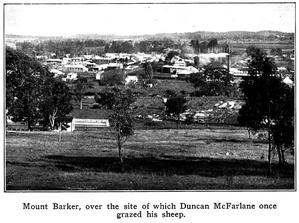 Macfarlane established a station at Mount Barker in 1839 when he imported 1,000 head of cattle overland from Sydney and also landing 1,100 ewes at Port Adelaide via the brig 'David Witten'.  Macfarlane subsequently introduced some of the MacArthur merino ewes from Camden Park, NSW to South Australia.

Scottish shepherds came to live in a row of stone huts almost upon the later Mount Barker township which Macfarlane and his partners laid out on part of his sheep run during 1840.  A sales office opened next to his homestead, his residence being the first built in Mount Barker.  Later he built a butcher's shop and supplied the early settlers with meat.

Soon, scab and closer settlement made the Mt Barker area unsuitable for sheep and Macfarlane shifted his pastoral interests to the South-East near where Millicent is now situated.  Unfortunately, he lost a lot of sheep there due to coast disease.  When he moved to Tatiara in 1845, he sold the butchering business to a man named Greenfields.

The 'Great Easten Road' between the Mount Barker District in South Australia and the overland road to New South Wales and Port Phillip was commenced in January, 1841.  Duncan Macfarlane, was appointed as one of the Trustees for the finances and for collecting tolls for this project.  In August 1841, Macfarlane was appointed a Justice of Peace for the Province of South Australia and presided over the Mount Barker Magistrates Court for a considerable number of years.

He subsequently owned land on the south side of Glen Osmond and took up shares in the Glen Osmond silver-lead mines.  For a time he lived at the old York Hotel in Adelaide, but finally retired to his residence at Glen Osmond where he died on 27 October 1856 at the age of 63 years.  His grave is believed to be in the West Terrace Cemetery, Adelaide.