When Hermann Kook laid out Hahndorf in 1839, the present allotment 13 was house allotment 8, out of a total of 54 lots reserved in this way.  A small family of Schulzes came to live here.  In Prussia, Dorothea Schulz, nee Paech, had married the blacksmith Gottlob Schulz of Rentschen, in south-eastern Brandenburg.  Unfortunately, her husband died and Mrs Schulz also had to endure the persecution of her Lutheran faith during the 1830s.  At last, she and her children, Gotthilf and Eleonore, were able to emigrate aboard Captain Hahn's ship, the Zebra, to South Australia in 1838 to start a new life.  The Schulzes were under the special care of Dorothea's brother, the influential farmer Friedrich Paech, known in Hahndorf by his nickname Rentschener Paech.

By 1853, Dorothea Schulz had paid off her debt on money borrowed to buy the land and she received a title for the property.  At Hahndorf, unfortunately Gotthilf Schulz died young.  His sister, Eleonore, married Gottlob Paech, one of the Kayscher Paechs of Paechtown, just over the hill from Friedrichstadt, where her Uncle Friedrich Paech lived.  Eventually, Dorothea went to live with her daughter and their Hahndorf cottage fell vacant.

Probably, Mrs Schulz rented out the house, but none of the tenants’ names are now known for sure.  After the Widow Schulz's death, Carl Wirth the mason bought the property, as possibly he had been renting it for some time beforehand.  He mortgaged the land to Adolph Bartels, publican of the King of Hanover Hotel in Rundle Street and later Mayor of Adelaide and father-in-law to the well-known SA artist Sir Hans Heysen.

In the midst of the mortgage repayments, Bartels died and his executors later sold the property.  Probably, Wirth defaulted on his financial obligations.  Another widow bought the allotment.  Eleonore Nitschke, nee Paech, had emigrated aboard the Zebra with the Schulzes and married Wilhelm Nitschke, yet another of the passengers.  Mrs Nitschke's Paech family were known as the Tischler Paechs, to distinguished them from the other Paech families already mentioned.

During her short married life, Eleonore Nitschke lived on a farm at Nain, near Greenock, on the western borders of the Barossa Valley.  After her husband died suddenly in 1872, Eleonore brought her young children back to Hahndorf, where she washed clothes to raise money.  She lived in a cottage on No 15 Victoria Street, next door to the property she bought in 1882 after Carl Wirth had defaulted in his mortgage repayments.

Upon Eleonore's death in 1916, her daughter, Bertha, inherited the Victoria Street allotments and came to live in the home at No 15 with her husband, the labourer and gardener Otto Gallasch, and their children.  The land at No 13 eventually descended to some of the Gallasch children.  After the last survivor of these, Vera Post, nee Gallasch, died, her daughter Margaret Tentye, nee Post, sold the estate to Trent Paech, who, as fate would have it, was a great-great-grandson of Friedrich Paech, the brother of Mrs Dorothea Schulz, the first owner of the land. 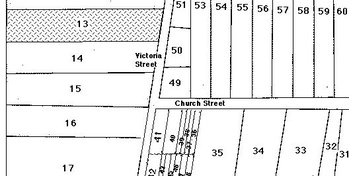