The pioneer colonists of 1836 and 1838 had many reasons to remember the munificent acts of the late Mr. George Fife Angas, ''one of the fathers and founders of South Australia.'  No other individual did so much to assist in the colonization of the province, and he spared neither labour nor time nor money in his efforts to induce a desirable class of emigrants to settle in the young colony.  Among the many acts of generosity which have been recorded of him, however, none was more deserving of praise than the assistance which he gave to hundreds of pioneer German colonists, who were subjected to cruel religious and political persecution by the Prussian Government, but who were too poor to bear the expense of chartering vessels to convey them to the new lands of freedom.  In 1822, owing to the action of the Prussian Government in issuing a new liturgy, large numbers of Lutherans rebelled against being compelled to conform to doctrines which had been opposed by their ancestors for centuries.  As years went on, and there appeared to be no hope of obtaining redress in the old land, many of them began to look with wistful eyes towards South Australia, which was then being brought prominently under the notice of the English public.  The Rev. Mr. Kavel, a minister of the Evangelical Lutheran Church, decided to appeal to Mr. Angas for assistance for his fellow countrymen, and this appeal led to the establishment of the German settlement of 'Klemzig,' the auction sale of which is announced to take place to-day.

On April 12, 1836, Mr. Kavel interviewed Mr. Angas at his London office regarding the bitter persecution endured by his co-religionists in Prussia.  He had a sorrowful story to tell of how 'forcible possession was taken of places of worship when the pastors refused to conduct the service according to the new form; several obnoxious ministers had been banished or imprisoned; fines had been levied; police supervision was enforced; and a system of petty tyranny was established . . . .  The sympathies of Mr. Angus were immediately aroused, and he determined then and there, on the receipt of verification of the statements, to lend all the aid in his power to assist the persecuted Lutherans.  South Australia, to which Mr. Angas had just dispatched the pioneer vessels of the South Australian Company, naturally suggested itself to him as a suitable place for the Prussians.  He broached the subject to Mr. Kavel, and ascertained that the large majority of those anxious to emigrate had not the funds to pay for their outfit and passage.'  Mr. Angas then most generously, and at a time when there was a terrific drain upon his resources, undertook at his own cost to charter a vessel and to defray all expenses in connection with the emigration of 350 German colonists to South Australia.  After almost insurmountable difficulties, extending over two years, during which the Prussian Government raised every obstacle by refusing the necessary passports, &c., Mr. Angas succeeded in accomplishing his object; and the ship Prince George with 200 persecuted Lutherans, sailed in July, 1838, for South Australia.  The passage occupied four months, the ship arriving on November 16, 1838.  The Germans strongly objected to be scattered over the country, and wished to settle together as a body of agriculturists; but, owing to delay in the survey of country lands, it was decided by Mr. Angas's representative to place them upon some land belonging to him on the River Torrens. a short distance from Adelaide, to which they gave the name of Klemzig, after their native town in Prussia. 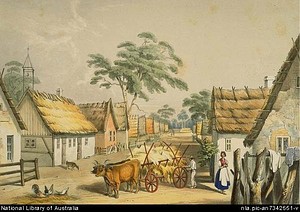 Klemzig - A Village of German Settlement near Adelaide - George French Angas 1847.From the biography of Mr. George Fife Angas, which deals with the life of this philanthropic gentleman, we make this extract:— ''The future history of these excellent German people belongs to the history of South Australia.  They were soon recognised as a power in the land, and the following description given in an Adelaide newspaper a few months after their arrival was not only true at the time, but was a fair bass on which to calculate tneir future prosperity:— 'All our readers are probably aware that there exists about three miles from North Adelaide a German village called Klemzig, but we have reason to think that this interesting little settlement is not so well known amongst us as it deserves to be.  Klemzig is situated on the northern side of the Torrens on the estate of Mr. George Fife Angas.  Like Adelaide, it is surrounded with noble trees, and from many points commands near views of our magnificent range ot mountains.  The river winds past it, and contains for the season a considerable depth or water.  An air of serenity pervades the spot, which is exactly such a one as the imagination would portray as the retreat ot persecuted piety.  The industry and quiet perseverance of the German character have been fully developed at Klemzig.  Four or five mouths only have elapsed since the hand of man began there to efface the features of the wilderness, yet nearly thirty houses have been erected, and good and spacious houses some of them are.  All are neat, clean, and comfortable.  They are built mostly of pise, or of unburnt bricks, which have been hardened by the sun.  The more humble cottages consist of brushwood and thatch. T he sloping bank ot the river is covered with gardens.  These consist of small unfenced plots of ground, seprated by narrow paths.  Considering that the season most favourable for gardening has not yet commenced the number of vegetables which the Germans have at the present moment under culture affords strong proof of their industry.'

The settlers at Klemzig were not the only contingent dispatched by Mr. Angas, who found the whole of the money to defray the expenses of sending out no fewer than 750 Germans to South Australia.  Afterwards others took up the work, and there were regular sailings from Hamburg of German emigrants, until about 8000 had settled in the colony.  The land on which this first German settlement of Klemzig was situated comprising 208 acres, is - as we have stated — to be offered by auction to-day under instructions from the executors of the late Mr. Angas.  It is many years since the permanent settlement of German colonists at Hahndorf attracted the settlers from their temporary home, and the name of the quaint little village, sketches of which are given in the volume to which we have referred, has long since fallen into disuse.  Its severance from the estate of the founder of South Australian German colonization will, however, recall to the older German colonists recollections of the hard ships and struggles of the little band who found there a peaceful respite from the persecution which they had endured during so many years.