Doctors lived intermittently at Lobethal until the mid-1930s, when young Dr Clifford Jungfer arrived and stayed for the rest of his working life and retired there.  A partner in the Hahndorf Private Hospital from 1935-1940 when the hospital closed.  He took his patients to the Lobethal Hospital.  Later closed the Woodside Hospital and transferred patients to Lobethal Hospital, shortly after Dr Colin Juttner of Woodside enlisted in the armed forces; he had previously arranged with Dr Jungfer to care for the Woodside Hospital and its patients until Dr Juttner’s return.

Born 20/11/1894 Kensington to Matthew Edward Linn baker and grocer on Kensington Road, and Mary nee Wadmore.  Became a general practitioner in metropolitan Adelaide.  He married 27/3/1920 in the Baptist Church Parkside, to Gladys Kathleen Saltmarsh.  During c1928, he became the local doctor in Tailem Bend from where he moved to Woodside in the early 1930s.  He lived in the upstairs rooms of Dr Esau’s former residence and consulted from rooms on the ground floor.  Dr Linn moved to Kingswood in c1934, and sold his practice to Dr Oscar Westcott Frewin.  Mrs Linn died 14/4/1968 at Daw Park, when the couple were still living at Kingswood. Dr LW Linn died after 1972.

Born 17/11/1904 in Jamestown, to the Anglican Rector of Jamestown Thomas Hugh Frewin, and Ada Mary nee Sanders.  His grandfather Thomas Henry Sanders, who emigrated from Britain in the early 1860s, originally a humble Pt Adelaide engineer, eventually rose to become Superintendent of Adelaide’s metropolitan Waterworks system.  OW Frewin studied medicine and then graduated as a doctor from the University of Adelaide, before serving his internship in practices in the metropolitan area and at Broken Hill.  Or was Broken Hill his own practice with a team of doctors?

In c1934, Dr Frewin purchased the medical practice of Dr LW Linn at Woodside.  On 31/12/1934, in St Peter’s College Chapel, Hackney, Oscar Frewin married Jean Redpath, born 30/10/1910 at Woodside, eldest daughter of William Ritchie Redpath of Woodside, and granddaughter of powerful Robert Redpath, a stern Scottish Presbyterian, who was the manager of the Lobethal Woollen Mill for many years.  The Frewins had three children – two boys and a girl, the younger son Simon born in 1942.

Dr Frewin had principal medical oversight of the Woodside Hospital, also became a partner in the Hahndorf Private Hospital, and looked after some patients in Hahndorf itself whenever, for whatever reason, Dr Theo Auricht was not able to do so.  When the Hahndorf Private Hospital closed down in 1940, Dr Frewin removed his patients there to the Woodside Hospital before selling his practice to Dr Colin Juttner of Tanunda, and moving to a gracious residence on North Tce Hackney within comfortable walking distance of his private hospital at 8 Harrow Road St Peters.  Press references refer to Dr Frewin now as O Westcott Frewin.  OW Frewin died at his Hackney residence on 1/1/1958, at the early age of 54.

[The above information compiled by Reg Butler, Hahndorf]

Until the end on the 1860's there was no doctor living and working in Mt Barker.  People used homeopathic remedies to try and cure just about everything from the common cold to cancer. Babies were delivered by midwives or mothers and sisters who had already given birth to their own children.

The first doctor to be resident in the town was Dr. Chalmers, who lived in the building that would later become the RSL rooms.  There were a succession of doctors in the town after the arrival of Dr Chalmers.  The following lists some of them, and where they practised.

Of course, these days, there are several surgeries in the town, and numerous doctors.  Medicine in Mt Barker has come a long way in 160 years. 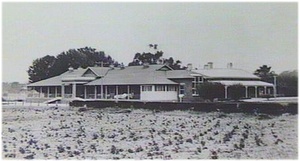 Mt Barker Hospital c. 1938There was no hospital in the town for many years, although the very seriously ill were taken to Nairne to Miss Thomas's hospital and treated there.

In 1918, when a particularly bad flu epidemic broke out, and it became necessary to isolate patients, an empty house belonging to Thomas Paltridge was used as a make-shift hospital.  Dr. Wunderley, being the physician in charge at the time, asked Mrs. Barr-Smith of "Auchendarroch" to assist him in building a hospital as a memorial to the veterans of World War I.  She generously donated £1,350 to the building fund, and the townsfolk donated the rest.  Furnishings and fittings were obtained from various sources, including Miss Thomas' hospital at Nairne.  The first part of the hospital was opened in 1919 and in 1927 a kitchen and nurses' home were added. In 1929, a babies nursery and night nurses' rooms were added, and later still other wings were added.

Today, the hospital is the largest medical complex between Adelaide and Murray Bridge, with several operating theatres and treatment rooms, visiting specialist suite, radiology department and other necessities of modern medicine.  I owe my life to the nursing staff and Doctors at Mt Barker District Soldiers Memorial Hospital.