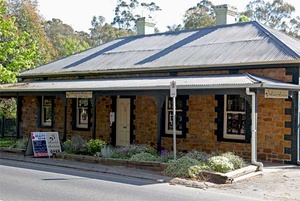 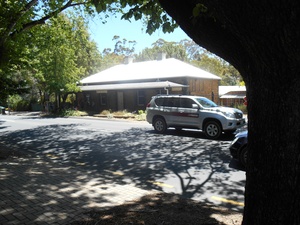 Johann Christian Liebelt was the first owner of this site.  His daughter married master carpenter Carl Faehrmann in 1854 who later replaced the original wattle and daub cottage with the present house.  To him are attributed the best examples of fachwerk construction in the town.

[Extract from 'A Picturebook of Hahndorf by Anni Luur Fox]  'FAEHRMANN'S HOUSE; 106 Main Street,  Johann Christoph Liebelt was the first owner in 1839 and built a two-roomed cottage of wattle and daub.  In the door was a mark caused by a spear thrown by an aboriginal at Liebelt's wife, Maria Elizabeth, who barely managed to escape.  The couple had 3 acres of wheat, 112 acres of potatoes, 6 cattle and 2 pigs in 1843.  Their daughter Eleonore  and husband, Johann Carl Friedrich Faehrmann (Father of N.F.C. Faehrmann next door) lived in the homestead for many years before they demolished it and built the present house.  J.C.F. Faehrmann was a carpenter who fixed the timber and slates to St. Michael's Church roof and also constructed the timbers of the Old Mill.  He built many half-timbered houses in Hahndorf.' 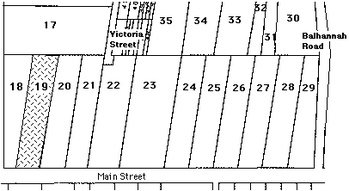