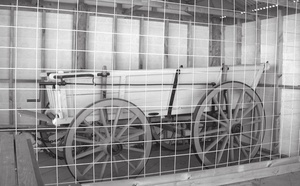 The German Wagon on display at Beerenberg Farm

Here on display at Beerenberg Farm is an original German wagon.  Vehicles of similar design were once an essential piece of equipment for pioneer farmers of German descent in the Hahndorf district, first settled in 1839.

This German wagon was once the property of Wilhelm Alfred Mueller, a prosperous farmer on the main road between Hahndorf and Echunga.  His mother, Mrs Ferdinand Mueller nee Johanne Paech, was a first cousin to August Paech, grandfather of Grant Paech, the founder of modern Beerenberg Farm.

Family solidarity probably dictated that the vehicle came from the blacksmith shop of August Haebich in Hahndorf, who was married to both August’s and Johanne’s first cousin, Caroline Paech.  HA Haebich used to remark that he could build a German wagon for £10 ($20 in modern language.)

Although cumbersome, German wagons could carry heavy loads both for farm work and away from the property.  Pairs of draught horses and sometimes bullocks pulled these wagons safely over stony or through boggy terrain as well as district roads often in poor condition.

Swept out and spruced up, German wagons regularly transported farming families on weekly shopping trips and to church on Sunday.  For special occasions, such as weddings and other community events, owners decorated their vehicles with garlands of ribbons and garden flowers and greenery.  In time, if farmers suddenly appeared driving a more expensive lighter English wagon or buggy, with springs which made for a more comfortable ride, neighbours knew that the proud owners were doing well financially.