Johann George Haebich, blacksmith, arrived in Hahndorf in 1846 with his wife and three children.

The cottage, built in 1855, is a rare example of traditional German timber-frame construction, infilled in this case with brick.  The original structure beneath the main half-hipped roof consists of a rectangular plan of two large end rooms and central entrance and kitchen area.  This German plan form is known as Flur Kuechen or passage kitchen house.  Although additions have been made, including the bull-nosed verandah, much of the original structure is still evident beneath the main half-hipped roof.

The smithy was built in 1880 by August Haebich, who had taken over the business of his late father, George Haebich, in 1872.  It was still functioning in the 1920s and has been depicted in some of Sir Hans Heysen’s drawings.  In 1973 it was converted into an art and craft centre.

The cottage, blacksmith shop and separate boys' building on this site were erected by members of the Haebich family.  Johann George Haebich, who was born in Stuttgart-Botnang in 1813, arrived in Port Adelaide with his wife and three children in October 1846 on the 'Heerjeebhoy Rustomjeepatel'.   He was a blacksmith who shoed horses, made nails, nuts and bolts and farm machinery.
In 1850 he purchased the site of the present German Arms Hotel at 69 Main Street.
He moved his family and business to 71 -75 Main Street in 1855.

Haebich Cottages (2002)Close to his workshop of red gum slabs he built a small single room with a loft for sleeping quarters.   Opposite this structure is a stone building with a kitchen, dining room and tiny bedroom.  The huge fireplace provided the Haebich family with food, hot water and warmth in all seasons.  On Saturday nights a hip bath was set up by the fire.  The family bathed in succession, father last because he was the dirtiest from his forge, in readiness for church and visits to friends on Sunday.  Soapy water was thrown onto the garden.
The well and later, a huge underground tank were the only sources of precious water.  It was always carefully conserved.  The garden that fed this large family with a steady supply of vegetables and fruit, was watered by the children with bucket and watering can. 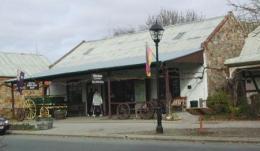 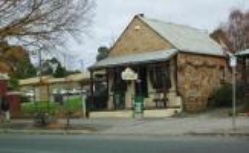 In the late 1850's J.G. Haebich built a substantial 'fachwerk' (basically a timber skeleton with infill of pug [straw/mud], brick or stone) cottage close to the road, leaving just enough space for a flower garden at the front.  The kitchen building was connected to the living quarters with a vine-covered walkway.  Walnut trees were planted close by.
Today Haebich's cottage is one of the rare examples of fine German craftsmanship in Australia. 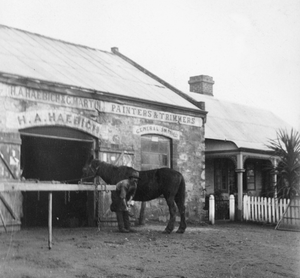 Horse being shod outside HA Haebich's Smithy (c1910)J.G. Haebich's premature death in 1872 left his twenty-one year-old son, Heinrich August (known as August) in charge.  He took August Pade as a partner.  Pade died in 1875.
In the previous year, August Haebich's seven month marriage to Marie Thiele had ended with her death from pneumonia.  After Caroline Paech became his second wife in 1877, prosperity, four sons and five daughters followed.  August built a fine stone blacksmith shop close to the road in 1880 and later erected the stone building at No. 71 to house his sons until they married.  They all worked in the smithy as young men helping their father.

Extract from Aldine History of SA  -  HENRY AUGUST HAEBICH was born in 1851 in Hahndorf, and is the son of John Haebich, of Wertenberg, Germany, who arrived in 1846.  After he left school he followed the trade of a blacksmith, and is now carrying on the business established by his father in 1847.  He married in 1877 Caroline Paech, by whom he has six children.

Alfred Miller rented the "boy's house" for his grocery business until 1899 when he married Alma Haebich and built a new store across the road from the German Arms Hotel.

Family meals at Haebich's cottage were served on an enormous table in a large room off the kitchen.  A grand-daughter remembered August resting on a long black baize-covered couch after dinner, his long white beard flowing down his chest.  He was a tall imposing figure, a scholarly man with beautiful copperplate handwriting learned as a student at Boehm's Hahndorf Academy.  He always wore a top hat to church.  Grandmother was tiny, with a placid, kindly nature, but often looked tired from her interminable duties in a household of nine children.  Any clients waiting to have their horses shod or wagon wheels fixed around lunchtime usually joined the family for meals. In the evening, the women of the family sat mending or knitting by lamplight while the men adjourned to the hotel. 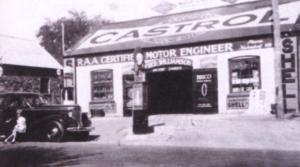 As Motor Garage late 1930's (before restoration) As transportation by horse and cart gave way to the automobile, petrol pumps appeared near the footpath.  The abandoned old red gum smithy in the backyard remained unchanged, but the stone building at the kerb-side was used as a garage until 1972 when the arts and tourism industries gave it a new life.

Haebich's Blacksmith Shop and the other 19th Century buildings next to the Pioneer Gardens owe their survival to John Storey (deceased), his wife Catherine and sister-in-law Clare Ferguson who established 'Storison Arts and Crafts' in 1972.

Blacksmith Equipment at rear of Property plus 'Cow' (2004)    Since then, they gradually restored the buildings that make up the Haebich home and business complex so that the fortunes of this immigrant family can still be traced in the structures they erected.  Reminiscing about this period in Hahndorf's history, John often recounted the tale of a Mt Barker Council planning officer advising them to bulldoze everything and put up a modern shopping centre!   A great grandson of one of Hahndorf's original British owners, Captain John Finnis, John Storey was the founding chairman of the Hahndorf Branch of the National Trust of South Australia in 1976.

After John Storey's death in 2001, Haebich Cottage was partly used as a residence by his daughter Kylie, with the remainder as bed and breakfast accommodation. The Blacksmith's Shop remained as 'Storison's Art and Craft Gallery', and the smaller building used by 'The Cutler's Cottage'.

As at 2012, the rear of Haebich Cottage is used by Kylie Storey as a residence with the front portion being leased to  'InSync Graphic Design'.  The Blacksmith's Shop is divided between 'Storison's Art and Craft Gallery' and  'Birkenstock in the Hills'.   The smaller building still being used by 'The Cutler's Cottage'. 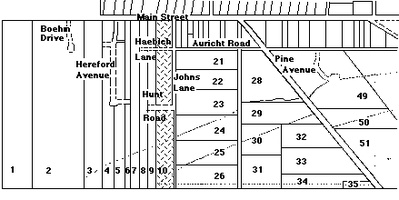 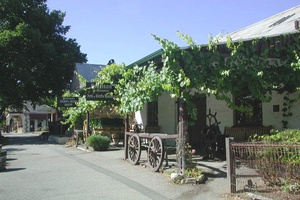