Suspended on the wall in what is known as the “Supper Room”, within the Hahndorf Institute building, there is an oak tablet that has a grand height of around two metres.  Upon it, in gold lettering, appear the names of eighteen former pupils of the Hahndorf College school, now the Academy, who volunteered to serve “King and Empire” in the second Boer War (1899-1902).

The tablet was unveiled, amid great ceremony, in 1904 and it is perhaps a melancholic indication of the passing of time that, after several moves over the century, this panel has migrated from pride-of-place in the Academy building to a forgotten backroom bereft both of convenient public access and of local knowledge.

As far as can be determined, (and unlike a number of other Adelaide Hills towns), each one of Hahndorf’s eighteen survived the conflict and continued life beyond the war.  Dunn was invalided to Australia but subsequently lived until 1951.  Blue returned to Africa in 1914 but died there shortly after arrival, after developing pneumonia.  Formby was in the medical corps and became a practising doctor upon his return to the Adelaide Hills.  Some, however, do not appear mentioned in the definitive “Official Records of the Australian Military Contingents to the War in South Africa” suggesting that they perhaps enlisted but then never embarked.

Several won promotions and two received awards for distinguishing themselves in battle.  Herbert Woolmer Brown received a DCM (Distinguished Conduct Medal) after he swam, under Boer fire, across a river to retrieve punts (flat bottomed boats) for the transport of troops.  He died in North Adelaide in 1930.  His King’s and Queen’s medals, with clasps, appeared at auction as recently as 2012. 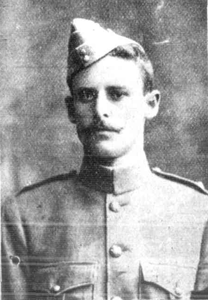 SC McFarlaneSidney Colin McFarlane (also spelt ‘Sydney’ and ‘MacFarlane’) was awarded the DSO (Distinguished Service Order) and had risen to the rank of Captain by the end of the conflict.  He was born in Angaston but his formative education was undertaken in Hahndorf.  He later began his working life in Port Lincoln then relocated to Western Australia.  MacFarlane then went to the war with the Western Australian contingent but was injured by a bullet to his lower leg at Vet River and invalided to England to recuperate.  Upon his return to the conflict, he joined the South Australian Imperial Bushmen’s Corp where he served out the remainder of the war.

Upon cessation of hostilities, he chose to remain in South Africa where he became a successful farmer with his brother in Orange River Colony.  He appears to have been highly regarded and donated much time to the maintenance of the graves of Australian soldiers who did not return home.

McFarlane later joined the Johannesburg Mounted Rifles and when the Zulu Rebellion of 1906 began, he joined the fight in a quite uneven contest against the natives.  On 10th June 1906, at the Battle of Mome Gorge, in Natal, McFarlane was struck down by a shot to the chest.  His fall was broken by a comrade but the witness stated that Captain McFarlane died almost instantly only muttering incoherently at the end.

He was just 28 years of age and was buried in the Eshowe Cemetery in Natal.

Captain McFarlane was the first son of Hahndorf to die in battle.  Unfortunately, many more were to follow over the next decades.

Any comments, additions or corrections to the above article, please add under this heading or contact David Grant ( email: [email protected] ).

Additional Information - The publication 'A College in the Wattles' by Reg Butler has considerable information regarding Hahndorf's contribution to the Boer and other wars.  Refer chapter 5, pp 148 - 198.  [Tony Finnis]