Hahndorf's foundation settlers travelled amongst four ship-loads of Lutheran Prussian refugees, which landed in South Australia in late 1838-early 1839.  These people faced a new homeland vastly different from that of their birth.  A youthful Queen Victoria, only a year into her record-breaking reign, ruled from far-distant London.  After just over two years of white settlement, some 6,000 British colonists huddled near Adelaide and its adjacent port, with a 380,000 square mile hinterland untrodden save by the kangaroo, the wild dog, the emu, and the wandering Aborigine. 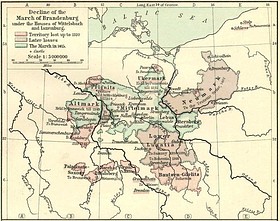 Brandenburgh 1320 - 1415Various difficulties had prevented the survey of country land from proceeding apace and waiting farmers-to-be filled their time in idle amusement, including inflationary gambling upon their unimproved Adelaide Town Acres.  Only eighty-six acres, including twenty with wheat, lay under cultivation in the entire colony.  Often surrendering valuable assets to raise the necessary capital, the population survived on expensive food imports from neighbouring colonies and Britain.

Those newly-arrived Prussians had left behind an aged monarch, only a couple of years away from completing his forty-three year reign.  Most of the emigrants hailed from the rural south-east corner of Brandenburg, only 160 km from the nation's capital - Berlin.  Centuries of experience had taught how to survive periodic violent political upheavals and wrest a living from the area's generally unproductive soils.

Geographically, Brandenburg showed little variety.  It formed part of the immense plain which stretched across central Europe and western Asia.  Scarcely any of the country lay above sea level; in fact, only the system of sand dunes along the Baltic coast to the north prevented the ocean from causing much flood damage.  Throughout the countryside, many forests and small lakes broke up huge areas of dumped river sand; while heaths and moors formed over widespread drift sand called Brennflachen.  The pockets of fertile farm land stood out noticeably indeed. 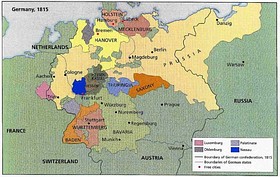 German States 1815Hahndorf's foundation settlers came from some twenty of the 4,379 villages and adjacent farms in which nearly two-thirds of Brandenburg's 1,600,000 (1836 census) people lived.  The whole country was just over half the size of Tasmania.  Few pieces of labour-saving machinery existed to help farmers obtain their crops of wheat, potatoes, flax, tobacco, hay and clover.  Prussia's best sheep, both for wool and meat, grazed on the moorland and reclaimed river flats.  Beehives on the heaths nurtured a thriving honey industry.  Placed strategically throughout the country, Government breeding studs worked to build up the numbers of livestock, horses and pigs seriously depleted during the recent lengthy Napoleonic Wars (1796-1815).

France had ransacked much of Brandenburg to gain troops and supplies for the invasion of Russia - a project which utterly failed.  Often unsuccessfully, Brandenburg's Government worked hard to prevent too much interference by French officials in its national affairs.  Gottfried Lubasch, Hahndorf's first hotelkeeper, had to march with Napoleon's army to Moscow during 1812 and then joined in the final battle against the French at Waterloo in 1815.  Gottfried Dohnt, a fellow founder, won a Waterloo Medal for his part in the conflict. 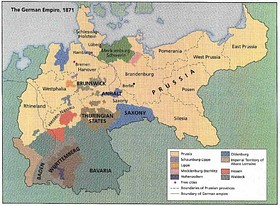 German Empire 1871From time immemorial, warring tribes had occupied Brandenburg and fought amongst themselves there.  Charlemagne, the first Holy Roman Emperor, managed to subdue the area thoroughly for the first time. In 808AD, he handed over Brennabor (later Brandenburg), the fortress in the forest, which he had constructed, to a Count or Markgrave, who continued to keep the peace.  At the same time, the mostly - Germanic population became Christian and willingly joined in conquest of the heathen Slavs further east and the capture of their land.  As a reward for hard work, the Markgrave eventually became an Elector, which entitled him to join six other rulers in helping to choose the next Emperor as the occasion arose.

Despite periodic losses of territory in war, the Electors of Brandenburg generally managed to increase their possessions over the following centuries.  Battle victories, marriage to wealthy heiresses and an outright purchase or two all helped.  The capital city shifted from old-fashioned, cramped Brandenburg, to more spacious Potsdam, near Berlin. In 1417, the Hohenzollern family bought the province from the Holy Roman Emperor and later annoyed him considerably by declaring that Brandenburg’s Electors would henceforth be known as Kings.

Even worse - the new Kings felt free to fight Emperors for further territory, and in 1745 snatched away their rich farming state of Silesia, whose northern borders joined Brandenburg.  A small portion, the District of Züllichau-Schwiebus north of the Oder, became part of Brandenburg itself to allow the river to become the natural boundary between the two areas.

Germany 1945 after WWIIAt a stroke, the gently-rolling hills rising from steep cliffs above the Oder became Brandenburg's newest high point.  They protected the region from the worst of the chill Baltic winds sweeping south during winter.  Enough sun warmed the ground sufficiently for grapes to grow profusely outdoors the furthest north in Europe.

Over the years, the ancestors of many of the Hahndorf founders arrived as loyal Hohenzollern colonists in Züllichau-Schwiebus.  They increased the yield from soil which was much better than the rest of Brandenburg's, but more poorly farmed, and made sure the King's new subjects remained obedient.

By turn, newly-arrived farmers learned how to cultivate vines and make wine, while immigrant carpenters grew skilled at keeping in repair the numerous wooden windmills which worked well in the higher altitudes to grind corn from neighbouring farms.  In several instances, colonists themselves, such as Friedrich Helbig and Gottfried Rillrich of Friedrichsfelde, re-emigrated to found Hahndorf.

For some centuries before the annexation, prosperous German weavers had lived in the district's two considerable towns - Züllichau and Schwiebus - and other Germans controlled distilleries which processed much of the local potato crop.  Fish, eels and crabs caught in the waters of the Oder River finished up in barrels despatched by Brandenburg merchants aboard long river barges plying the slow-moving waters of river and canal systems westward to Berlin and the North Sea; or northward to Stettin and the Baltic.

Religious Situation in Central Europe about 1618Even though Züllichau-Schwiebus played only a relatively minor role in high commerce, numerous representatives of the rich and powerful elsewhere constantly travelled through the region.  Inhabitants of the many long street villages (Straßendörfer) on the main north-south roads watched international traders headed for bridges over the Oder at Crossen and Tschicherzig.  Other merchants moving along east-west roads between Warsaw and Berlin crossed at Frankfurt-an-der-Oder, which began to specialise in regular trade fairs to exhibit a variety of the products available for sale.

Frankfurt-an-der-Oder also became important for passengers and goods arriving by water between the east and Berlin.  Cheerful bargeman steered their vessels carefully between the Oder and the Friedrich-Wilhelm Canal just south of the city.  This waterway had been constructed between 1662-1668 and named after the reigning Elector of Brandenburg.  Some twenty-three kilometres long by fifty metres wide, the canal was not navigable in dry seasons.  Shipping moved under the Frankfurt-Cottbuss railway bridge (in later years), prior to travelling through Müllrose, and then entered the Spree at Neubruck; from there, it was just over forty kilometres north-west to Berlin.  Traffic destined for Hanover and Hamburg avoided central Berlin by taking a ring route of two further canals to Potsdam, before continuing along the Havel and the Elbe Rivers to the North Sea.

After the reigning Saxon house died out in 1417, Brandenburg was ruled by the Hohenzollern family, who kept power until Kaiser Wilhelm 11 abdicated in 1918.  The province was divided into two administrative Departments - Potsdam and Frankfurt-an-der-Oder - under the control of a president-in-council (Oberpräsident) in Potsdam.  This authority directly controlled the Protestant Bishop, the army, education, health and manufacture throughout the nation.  Together, Brandenburg and neighbouring Pomerania formed one of Prussia's seven great military sub-divisions existing in blocks from the Rhine to the Vistula.  At the age of eighteen, all males had to undergo military service organised from army headquarters in Potsdam; when Hahndorf’s founders left their homeland, George Paech’s son, Gottfried, could not leave with them, as he was doing his time in the armed forces.

The Departmental president (Regierungsbezirkpräsident) in Frankfurt-an-der-Oder controlled seventeen Circles or Kreises, of which Züllichau-Schwiebus was one.  After the Napoleonic Wars, to its great grief, Schwiebus had lost its right to exist as a separate Circle; the rather drab, equally small garrison city of Züllichau to the south took over the combined administration.  Regional government offices lined Kaiser Wilhelm Strasse in Züllichau, while the city’s own municipal staff worked from the nearby Town Hall in the market place.

Some half a dozen officials took charge of local government affairs in each town and good-sized village within the Circle.  These people included the Mayor, pastor and teacher.  Smaller hamlets employed a full-time schoolteacher, but other officers for the place did their work part-time from one or more of the larger centres.  The Hahndorf founding families of Schultz from Klippendorf, and Thiele from Goltzen, for instance, looked to neighbouring Rackau and Klemzig administrators to despatch appropriate business.

As can be imagined, the 1830s religious turmoils which forced Hahndorf’s founding families to leave their familiar surroundings and emigrate across the world were shattering indeed.  Apart from military service, few people had either the means or desire to venture far from their native place.  Constant hard work yielded an income to exist, and citizens looked for nothing further than undisturbed worship of their God and loyal allegiance to their monarch.

To late twentieth century citizens concerned with computers and space exploration, the great Lutheran religious protest with political significance, of the early sixteenth century, must often seem unbelievable.  Germans could now read the Bible and conduct services in their native tongue, but also often saw the movement as a chance to throw off foreign rulers, for what we now call Germany was far from being one country.  A nineteenth century scholar, RW Eastwick, afterwards wrote, Frenzied leaders arose from the masses and headed political riots; the peasants, groaning under centuries of tyranny, demanded vengeance against the princes who held them in bondage.  Churches were wrecked and fanatics prophesied strange things.  Even the Dutch scholar Erasmus could remark fearfully at the time of the upheavals, Now I see no end of it but the turning upside down of the whole world.

Three centuries later, the fervour had burnt itself out.  Each of the German states had settled the religious problem one way or another; in now Lutheran Brandenburg, the clergy also loyally supported the government.  The local lord could nominate a new pastor to a particular village church and the congregation raised his salary, but the Government made, and continued to control, the appointment, which usually lasted for life.  Besides purely religious duties, the parish clergy announced royal decrees from the pulpit, organised community tree plantings and showed peasants how to farm.  Regularly, the pastor had to supply government officials with population statistics and data on the weather, crops and disasters such as floods.  Periodically, all clergy travelled to Berlin to receive new orders and answer questions on conditions in the parishes.  Although pastors often lived rather uncomfortable, isolated lives, they enjoyed unquestioning loyalty from their members.

From constant mixing with government officers in Berlin, Potsdam and Frankfurt-an-der-Oder, the church hierarchy, including the theology professors in the Universities, grew away from the ordinary parish pastors.  Religious belief no longer seemed to matter as much as a calm, rational life, with few changes to daily routine.