The Hahndorf CFS has used a siren since its formation in 1949, when the home of our Brigade was a shed on the side of the Old Mill.  An old civil defence air raid siren, affectionately named “Wailing Willy”, was erected on a light pole where the current Pioneer Garden is today. 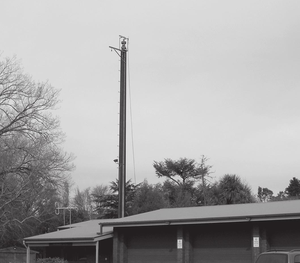 The complaint in those days was that it wasn’t loud enough!  Wailing Willy was re-mounted on a recycled windmill tower next to the new station, built on the present site in 1955.  It was replaced by a new siren in 1958, and in 1993 the present stobie tower was erected.

Sounding the “all clear” after emergencies was discontinued, followed in the late 1990’s by abandoning the test sounding every Monday afternoon at 5pm.  Countering this is the increased number of callouts the Brigade is now required to respond to, on average about two emergencies a week. This contrasts with less than one a fortnight twenty years ago.

When a member of the community calls “000”, the call is routed through the MFS emergency response system.  Should their computer decide that Hahndorf Brigade is best placed to respond, our members’ pagers are alerted, and the siren is automatically sounded, only between 7am and 8pm, maximizing turnout numbers and rapid response.

To minimize the impact of the siren on the community during the night, we rely on our pagers in order to respond to these emergency callouts.  However, on rare occasions during these hours insufficient numbers of volunteers respond.  This may be because there is a malfunction in the Government Radio Network, pagers are turned off or have flat batteries, or there are simply too few volunteers in close vicinity.  Then the siren is sounded to alert members that extra crew are required.

The Brigade feels that the majority of the community does not mind being occasionally woken in order that a local emergency be dealt with in the safest manner possible, and they may rest easier knowing that unpaid volunteers are turning out at these unsociable hours to protect them.

We always encourage and welcome new recruits to our ranks and a wider membership base would result in further reductions in siren usage.
Call Trevor on 8388 7997 for details.