The Hahndorf Cemetery located at 172 Snelling Road, Hahndorf is a public cemetery with a difference. 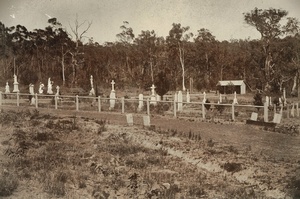 Not long after Hahndorf was settled, St Michael's Church was built with an area set aside for a cemetery.  By the mid 1800's, the town had three cemeteries - St Michael's Church, St Paul's Church and a public cemetery which is now a car park at St Paul's Church.  Following an outbreak of typhoid fever in 1882, and because these three cemeteries were in a residential area, the government closed them for precautionary reasons. It was feared that the town's water supply, ie. the wells and water from running creeks, could be contaminated. 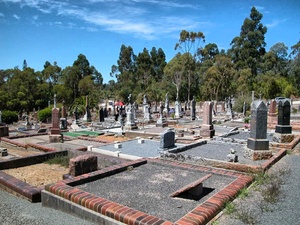 With the closure of these cemeteries, the government gifted the present site of 5.1 acres (2.06 hectares) surrounded by a natural timber reserve of 3 chains (60.4 metres) width, to the trustees.  Once gazetted as Hahndorf Cemetery, and with a composite Board of Trustees, the site was available for burials on 25th January 1883.  The first burial was recorded on 11th April 1883.  Since then over 1800 burial and cremation sites have been registered, making this a comparatively large site.

It is the only cemetery in South Australia not owned by a Council.  The Board of Trustees is self appointed, and since 1961 has been an incorporated body, answering to government requirements.  Maintenance and administration is carried out by a few senior Hahndorf volunteers.

As we stroll though this sacred site, we note that many of our early pioneers are buried here.  Sir Hans Heysen and his daughter Nora, artists very dear to all of us, as well as several ministers, among them Pastor Adolph Brauer, and Pastor CF Strempel can be visited.  So too can the grave of Dr Unrich Hubbe who drafted the Real Property Act or Torrens Title Act as it is now known.

Requests for information for historical research are frequently directed to the Trustees.  Several years ago 269 old gravesites, many of children, were researched and marked with identification tablets.  Prior to 1864, few records were kept.

The Ash Wednesday fires completely burnt out the cemetery, including buildings and fencing.  Bush Fire Relief and Hahndorf Lions assisted with restoration, then the Lions financed the erection of a new brick toilet block.

1989 celebrated 150 years of settlement in Hahndorf.  Memorial Gates at the entrance to the property were erected in memory of the founding pioneers.   Mt Barker District Council contributed $1500 to the project, with much voluntary work provided by the Lions.

[Based on an article by Max Altmann - former Member of the Hahndorf Cemetery Trust Inc.]

Refer to for a list of Gravesites at Hahndorf Cemetery.