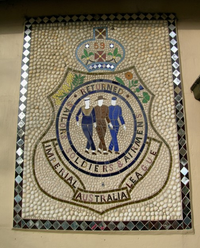 The colourful mural on the front of the Community Hall was completed in 1959 as a result of the efforts of Hahndorf EFS and RSL member Gordon Bernhardt.

Travelling through Ballarat on holidays his attention was taken by murals outside a shell museum.  He persuaded the owner, Arthur Pickford, to come to Hahndorf, a place he'd never heard of, and construct the elaborate mural of shells and mirror fragments.  The Hahndorf RSL Sub-branch paid for his expenses, including accommodation for Arthur and his wife at the Hahndorf Inn.

Gordon recalls that the mirror fragments come from periscope mirrors from World War 1 submarines, and the RSL Badge in the mural was Gordon's own.

Arthur requested that Gordon remove a two feet square portion of plaster from the front of the house on the Main Street where he and his wife Joan were living at the time.  Arthur added their street number 77 in submarine periscope mirror fragments in the front of the house, where it can still be seen, next door to Haebich's Cottage.