Porcelain doll making and collecting is a fast growing pastime and has overtaken coin collecting to become the second largest hobby in the world. As many as one-third of all collectors are male and rare dolls are now considered prime investment, not merely toys.

In October 1984, the idea for a Doll Convention to be held in South Australia was conceived by John Storey and Natalie Stewart of Hahndorf, as a vehicle for the doll world of Australia to participate in the celebration of South Australia's Jubilee year. On Friday 9th November 1984, a small group of nine people were invited to attend an inaugural meeting (all were from the doll oriented world but from different spheres) to discuss the formation of a Committee and the format such a function would take.

It was decided that these nine people, with the addition of another three, would make up the Executive Committee, and because of the number of exhibitions and shows that were hoped to be included, that it should be called the 'South Australian Doll Extravaganza'. Hahndorf, with its historic village atmosphere, a reasonable amount of accommodation and a large number of Art and Craft places, was chosen as the venue.

The aim of the Extravaganza was to have a friendly get-together of people interested in dolls, both antique and modern, and to exchange ideas, methods and knowledge of their expertise in this field. 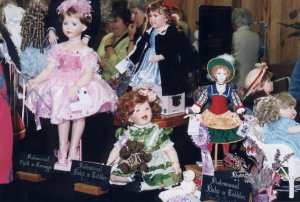 This convention would be a non-profit making venture, probably a 'once-only' occasion and any money remaining after the event to go to charities. Sponsors would be needed for the production of a brochure and for major prizes for the competitions.

As Hahndorf was a German migrant village, it was decided to base our logo and colour around this theme, and our logo for this convention became a jointed doll dressed in German costume with the year of the Jubilee occasion printed on the apron (see above). This theme was carried throughout the Extravaganza.

As no funds were available from the Jubilee Committee or any other Government source, the Committee started from rock bottom. Fund raising was difficult and required much work on top of the organisation required for the event. Our initial goal was to have 250 delegates, but due to demand this figure was increased to 275, the absolute maximum that would still allow for families of delegates to attend the function.

In mid November 1985, because of our large numbers, we decided to approach Countess Maree Tarnowska from England to lecture to our delegates. Maree is considered to be an authority on dolls throughout the world and having not visited Australia before, was anxious to do so and agreed to our request. 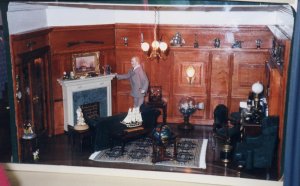 Because of the enormous workload involved, the organisational responsibility was split into six sections as follows:

The highly encouraging results of the inaugural South Australian Doll Extravaganza held in 1986 resulted in a most successful second event being staged in 1988. This has been followed by ever more sucessful events up to the present day. Doll Extravaganzas have now been held in Hahndorf, South Australia on a biennial basis since that date.

When the inaugural Extravaganza was staged by the small group of doll devotees, little was it realised that the event would grow, develop and evolve to what it is today. Hundreds of doll makers and collectors have enjoyed the Extravaganzas over that period, and grasped the opportunity to hear first hand from many, many experts in both modern and antique doll reproduction.