There are Old Barns in Hahndorf. This page will identify some of the most interesting.

A walk along Victoria Street shows us 2 historic Barns 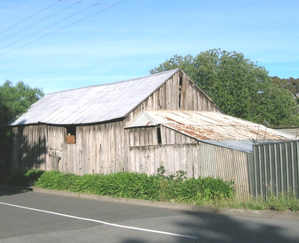 This barn was constructed in early settlement days by JHF Schneemilch.

The slab structure is an example of an early German barn, with the loft used as the family dwelling until such time as the house was built. 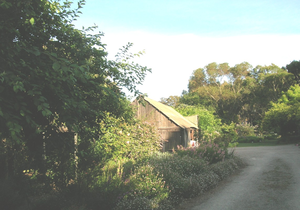 The Schneider Rothe Barn was constructed around the 1840s.

This is also a typical slab barn design with a pitched roof.

The house was built some three years later, so it is likely that the family initially dwelt in the loft. 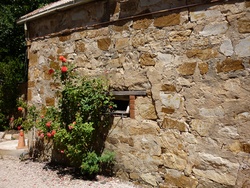 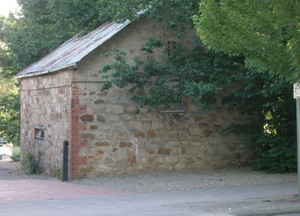 Main Street is famous for its historic houses and buildings but it is rarely written up for its Barns.

This Barn on Main Street is adjacent to the Hahndorf Pizza House.

This property originally belonged to Erdmann Jaensch, an agricultural labourer who came to Hahndorf from Klemzig.  He married, produced a large family and indeed is buried in Hahndorf.

Barn at Rear of Hahndorf Academy 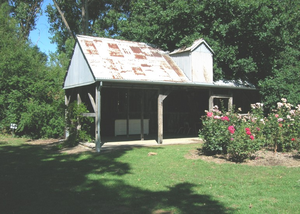 Another historic barn is at the rear of the Hahndorf Academy at the corner of Main Street and Balhannah Road.

This is an old slab barn and was built in the early settlement days.  It was re-roofed in the 1990s as a conservation measure.

The barn is now used for events, seminars and weddings by arrangement.

The third is between Mitre10 & Rockbare Cellars & was built around 1900.  The barn was used as a Carpentry Shop (possibly by Carl Faehrman whose house is next door - the house in front of Mitre10) as suggested in 'A College in the Wattles' - a history of Hahndorf.  It is also thought to have been used by an Undertaker over 80 years ago (could also have been Carl Faehrman).  Then there are memories of it becoming a Blacksmith's workshop where students from Urrbrae Agricultural College would come to study blacksmithing. 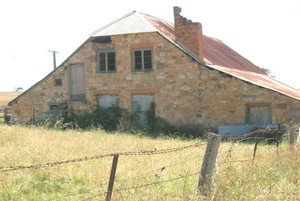 Mooney's BarnMooney’s Barn has similar characteristics to barnhouses found in central and northern Europe.  This land was acquired by CFE Reimann in 1854.  The large roof is believed to cover the original two room living accommodation, the hay and grain storage, and implement area.  Later a  lean-to dairy was added.  This is a significant barn with complex structure and history.

The ancient Saxon tradition whereby man, his animals and goods were all housed under one roof, common even in twentieth century Mecklenburg, is a rare house-form in  South Australia. Only one such building, Mooney's Barn, near Hahndorf, (above) has been discovered, although others are said to have existed. Two further barns at Paechtown have similar structure.  One has been renovated into current living accommodation. 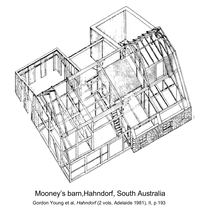