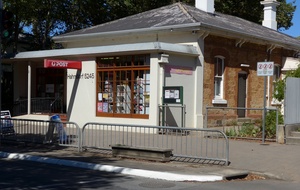 Statement of Heritage Value - This is one of the finest purpose-built post office buildings in the district, has significant associations with the late 19th century development of Hahndorf, and demonstrates a high quality of post office design and construction. 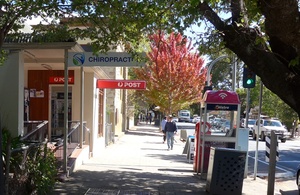 Hahndorf Post Office - Main Street 2016The original land grant, which included the site of the current Hahndorf Post Office at 57 Main Street, was purchased by Joseph Remfrey in 1849.  In 1852, the publican Robert Hunt purchased the land, which he subsequently sold in 1877 to the Government, together with adjacent land.  The Government initially intended to build Hahndorf's public school there, however, another more suitable property in Church Street was later used for the school.

Following a successful deputation to the Minister for Education in July 1882 for a permanent location, the Hahndorf Post and Telegraph Office was constructed on the site at 57 Main Street and opened for business in late 1884.  The building was later extended in 1960 and further modified to its present form in 1980. 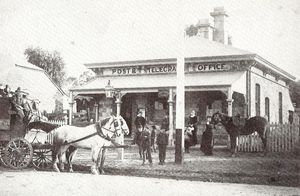 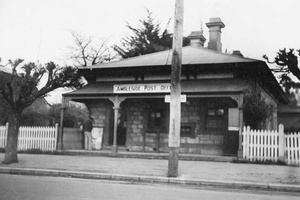 Ambleside (Hahndorf) Post Office c1933The first regular mail service between Mt Barker and Adelaide was established in about 1844 by Sergeant Johann Gottfried Lubasch, a Lutheran emigrant and veteran of the Battle of Waterloo, who lived in Hahndorf.  His daughter Louisa would walk from Hahndorf to Mount Barker to collect the mail, returning on foot to Hahndorf.  Lubasch would then take it on to Adelaide in a small spring cart that he had brought out from Prussia which was harnessed to two lively Timor ponies.  He did this mail run every two weeks, making the trip to Adelaide one day and returning the next.

The first official Postmaster in Hahndorf from 1864 to 1868 was the chemist and druggist Theodore Heuzenroeder.  Theodore was the son of Dr. Heuzenroeder and was born at Schwanewede, near Bremen, in Hanover.  He was educated at Bremen, where he received his diploma.  He arrived in the colony in 1859, and lived in Adelaide until he moved to Hahndorf in 1864 to take up his appointed position in charge of the Post and Telegraph Office.  Theodore carried out his Postmaster's duties in association with his chemist's shop and store in the late Mrs. Williamson’s house.  He moved to Tanunda in 1866 where he married Miss Fiedler in 1867.  She died in March, 1893 and Theodore died later in the same year. 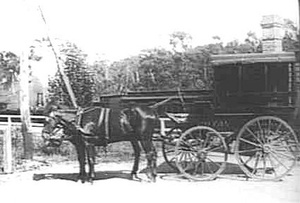 Gustav MartinAlfred von Doussa (junior) was Hahndorf Postmaster from 1871 to 1883.  He operated the Postal Service and Telegraph Office from his parent's house at 63-65 Main Street (currently the Chinese Restaurant) until the property was sold in 1883 to Christian Baumann, thus necessitating a new location for the purpose. 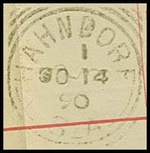 Hahndorf 14 October 1890. Squared circle postal datestamp.
Used on SC-DO-7A.
ERD for December 1889 printing.
{Telegrams Australia]A deputation was made to the Minister of Education in July 1882 requesting that a permanent Post and Telegraph Office be erected in Hahndorf.  As the government owned the property at 57 Main Street, they decided to construct a Post and Telegraph Office on the site.  Tenders for construction of the building were called and as stated in the Government Gazette dated 23 August 1883 the tender of Mr W Camens for £722 ($1444) was accepted.  The Hahndorf Post and Telegraph Office opened in late 1884 with Miss S.R. Offe as Postmistress in its now permanent location at 57 Main Street.

The Mount Barker Railway Station was opened in 1883.  After which mail was carried by train for a time and later still it was transported by registered mail contractors to Adelaide.  Mail to Hahndorf came by rail to the Ambleside Railway Station and was then delivered by Gustav (Gus) Martin with his horse and coach to the Post Office.  The coach also took passengers to and from the train.  The Post Office was closed for 1 hour each day while the mail was sorted.

After Gus Martin retired from his coach operations, Alan Melville Fry who had a one-horse two-wheel sulky with rubber tyres took Hahndorf’s mail to and from Ambleside Station.  When Alan went into the Army, the mail went to and from Adelaide per the service buses.

In The Mount Barker Courier and Onkaparinga and Gumeracha Advertiser of 18 June 1936, it was stated:  ..... The vehicle used by the mail porter at Hahndorf is a rubber-tyred run-about, and the pony is quite suitable for the work.  The time table provides for the mails to leave Hahndorf Post Office at 8.05 a.m., arriving at the Ambleside railway station at 8.35 a.m.; to leave on the return journey at 8.40 a.m., and due at the Hahndorf Post Office at 9.15 a.m.

At the time, the Main Street was still very rural in nature.  An indication of this was that in January 1886, the Deputy Postmaster-General forwarded to the Boards of Health a complaint of nuisance caused by a pigsty adjacent to the Post-Office at Hahndorf. 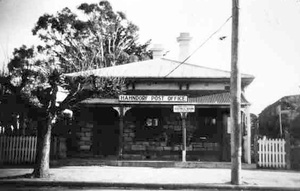 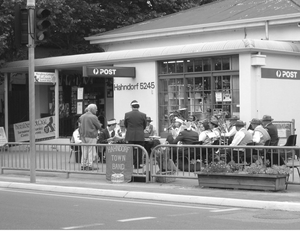 The Post Office was established in 1864 but available records do not indicate the name of the first Postmaster.  The following is a list of Postmasters and Postmistresses from 1866 to 1942: 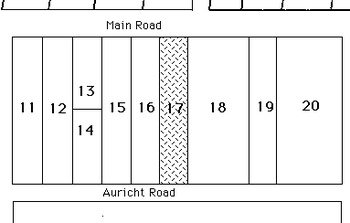 # It was intended to build Hahndorf's government public school on the site, but another site in Church Street was later purchased instead.  SH 16 & SH 17 linked for the intended school building project.

1884 - The Hahndorf post office was opened on this site.

The above Information was compiled by AM Finnis from data selected from JK Stokes, Reg Butler, AL Fox, G Tunnah, T Wittwer, 'Telegrams in Australia', 'Trove', and other sources.