The first club Koenigschiessen (“Kingshoot”) was conducted on 7 November 1864 in the old Germanic Schutzen tradition and was won by F H Sonnemann from a field of 27 shooters.   His prize was a silver medal and three pounds three shillings ($6.30). 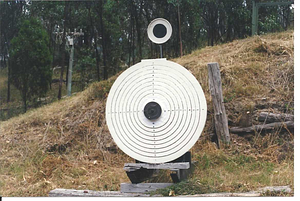 The event was unique as a competitor fires only one shot at a time, then goes back to reload another cartridge and stands in line again to await another turn to shoot at the target.  The white target was a steel disc with a black painted “bull” approximately 8 inches in diameter at its centre; the soft lead projectiles used to strike the steel leaving a mark that could be registered.  Traditionally, this event is “shot off the post”, which means that the competitor sits on a wooden box, supporting the rifle with both elbows on the knees, and rests the barrel of the rifle against the wooden post. 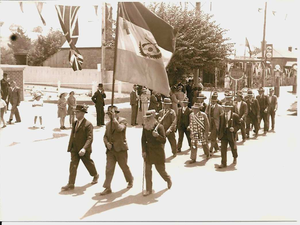 Further Kingshoots were held, but there are no records of the winners until 27 December 1869.  A new secretary, A Von Doussa, took over and from that date to the present time all competitors’ shots fired have been recorded.  At first, the Kingshoot was for Germans only, but after a time the shoot was opened to other nationalities to take part.

The day the Kingshoot took place developed into a carnival atmosphere with a grand procession through the main street of Hahndorf accompanied by a German brass​ band​.

The previous year’s King would lead the procession wearing the medal belt.  After the shoot, the new King wouldlead the procession back along the main street.  During the day, sports were run in conjunction with the Kingshoot; the band providing entertainment for the spectators. The last Kingshoot street march ceased in the early 1970s. 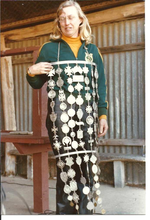 A new era started in 1900 with three consecutive Kingshoots being won by the world-renowned marksman, J T Lake.  This feat has only been equaled once by A A Pitman in 1954-1956.  The prominent firearm used from the turn of the century until the Second World War was the Winchester Single Shot Hi-Wall Rifle, firing lead projectiles with a black powder propellant from a .38 calibre rifle (the most commonly used).  In 1918, Dick Borchers set a new record when he shot 153 points out of a possible 156.

The post Second WW period has also seen enormous changes in technology with firearms, powder and projectiles.  During this period, Norm Rule went on to win a ​total of nine Kingshoots.  In 1978, Dennis Overall was the first person to achieve maximum points in both rounds at a Kingshoot and the previous year Yvonne Hill, another Olympic Shooter, was the first and only woman to ever win a Kingshoot at Hahndorf.  Using a borrowed rifle, Yvonne shot 154 out of a possible 156 points from a field of 89 shooters.  Her grandfather, Ben Stein, won the Kings crown in 1913 and her father Vic Stein, took out the military Kingship in 1929. Ray Trevelyan was the last King to win using black powder and lead projectiles.  He won with a score of 151 out of a possible 156 in 1957. In 1991, David S Keen was the first at a Kingshoot to score a double possible (156 points out of 156 points) without using any sighting shots.​

The distance shot is over 200yards (180 metres) but with modern rifles, powders and projectiles, the steel targets have been replaced with other materials that the projectile can penetrate without ricochet off the target.  The target aiming point (the bulls eye) is 8inch (20cms) in diameter and its value is still 13 points.  Aperture sights (iron sights) only are used on Kingshoot rifles today (originally only “open sights” in the rifle were used) and the number of scoring shots, 12 over two rounds, are fired in rotation.  This method of shooting at a Kingshoot has not changed since the inception of the Hahndorf Kingshoot. 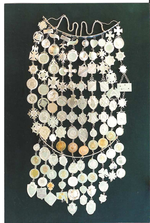 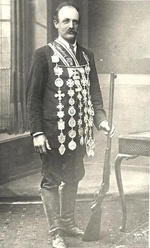 Over the years the Kingshoot has attracted many shooters and spectators from the local area and also from Interstate.  The club provides safe shooting facilities for rifle enthusiasts in the Mount Barker-Hahndorf region as well as for those in the Adelaide Hills, the Fleurieu Peninsula and as far afield as Adelaide.