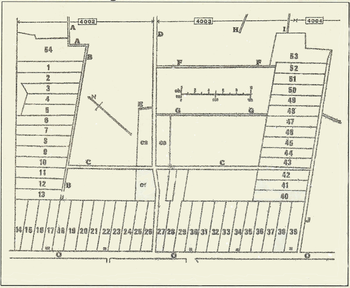 Captain D Hahn and passengers of the ship the 'Zebra' arrived in South Australia late 1838.  He was so concerned for the welfare of his passengers that he helped in obtaining a lease of 240 acres of land in the Adelaide Hills so that they might settle as a group.  This land was part of the Mount Barker Special Survey and comprised sections 4002, 4003 and 4004.

The original Hahndorf settlement was situated on the north-eastern side of the Main Street stretching from the northern boundary to Windsor Avenue and east to the golf course (now The Carlton Club).  The town land was subdivided into numerous blocks.  These allotments were classified into house and land (or farm) blocks.  The position of the house blocks is shown on the map.  They were numbered from 1 to 54.  Each family was allocated a house allotment (usually about one acre in area) and several land allotments which were scattered throughout the village.  Thus each family had a total allocation of about 4 acres.

Hahndorf's layout is a unique form, combining characteristics of both the farmlet (Hufendorf) and street village (Strassendorf) patterns of Prussian land subdivision.

In 1839 the village of Hahndorf was planned as a U-shaped Hufendorf of small farmsteads, with the Lutheran Church (now the site of St Michael's) as the focus.  Hermann Kook seems to have been the person asked to survey the settlement, and his first task was to set out the house blocks for the original settlers.  He produced a U-shaped plan with its base running along Main Road, and the left and right 'limbs' edged by North Lane (now Victoria Street) and South Lane (now English Street).  Inside the U, Church Street and Balhannah Road now intersect at the central area that was set aside for St Michael's Church.  The blocks were numbered 1-54 and each was sufficiently large enough for a house, a subsistence garden and a small farm. 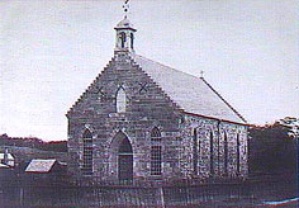 St. Michael's Evangelical Lutheran Church 1859  -  Photo B 18229: State Library of SAWhen the settlers purchased another 240 acres, Kook had to extend his survey to include numerous holdings that could be divided amongst the settlers for agricultural uses.  Each family obtained a number of widely-dispersed, small holdings, which in theory at least, gave everybody a fair share of the well-watered and fertile land.

After about 10 years, the basic plan for the town needed to be extended, to cater for an increasing population.  In 1849 F.W. Wittwer purchased land which he subdivided into allotments on the south-eastern side of Main Street, opposite the original lots.  Joseph Renfrey bought land further along Main Street (or the Great Eastern Road as it was then called) and subdivided into 100-foot allotments.  These subdivisions gave this section of Hahndorf the appearance of a Strassendorf village, the layout of which can still be seen in the arrangement of allotments along Main Street.

In 1857, in accordance with regulations associated with the introduction of the Torrens land title system, a detailed plan of Hahndorf was drawn up.  It shows the subdivisions of Kook, Renfrey and Wittwer amongst an array of land strips and blocks that were the agricultural holdings of the early German gardeners.  The plan is unlike any other in South Australia, and contributes to the uniqueness that is a prized characteristic of Hahndorf. 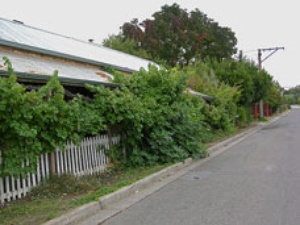 View along Victoria Street, HahndorfSince these early days, many changes have occurred within the original Hahndorf sections.  A number of minor roads and cul-de-sacs, for example, have been added to the historic road network, as the original agricultural blocks were developed for housing.  Historically, the portions of open space far outweighed that of buildings, and small one- and two-roomed, single-storey cottages and associated buildings were spaced along the house allotments.  The density of buildings gradually grew until cottages were built on the 'agricultural' allotments and eventually lined all the main and minor roads.

As Main Street was part of the Great Eastern Road, it became an important thoroughfare and the focus of the town's commercial activity.  Most of the early shops and industries were family businesses, with many of the buildings reflecting a dual residential and commercial use.  Progressively the village, especially along Main Street, included larger two-storeyed structures, such as Wittwer's Flour Mill and the hotels.  In 1885, the length of Main Street was planted with 300 cork, elm, chestnut and plane trees. 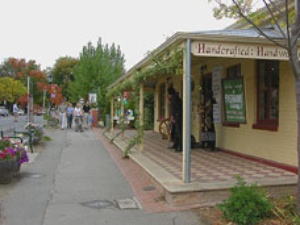 Main Street, HahndorfThe historic character of the Hahndorf State Heritage Area, centred on Main Street and Victoria Street, arises from two particular aspects of the town's German heritage - its unique plan form (a combination of both Hufendorf and Strassendorf patterns) and the many surviving nineteenth century buildings.  These were originally constructed using traditional German designs, but later assimilated to styles more suited to the Australian climate and materials.  The small rural scale of the buildings, the open spaces, and the avenue of trees along Main Street all contribute to the area's character.

Some of the older buildings show traditional German designs and techniques, such as 'fachwerk' with timber framing and wattle and daub infill panels.  Many other buildings are of local stone which, together with the large street trees, creates a distinctive streetscape.  Open farmland at both ends of the town is another important element of its landscape setting and character. 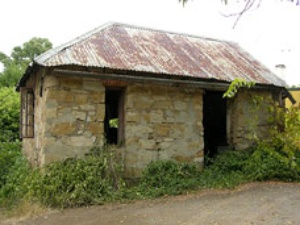 Early stone building, behind Bank on Main StreetHahndorf has been a popular tourist centre for many decades, and as such presents two different visitor experiences.  On the one hand there are the Bavarian-style restaurants, the coffee houses, and the craft and souvenir shops, which many people would argue have destroyed its heritage value.  On the other hand, closer examination reveals that there is still much physical evidence of the early village settlement and of the Lutheran pioneers and their descendants.  Most of the commercial outlets fronting Main Street, for example, were once houses, barns, or stables, and much of their original features and style are still noticeable.  In some cases, evidence of a building's German origins is hidden behind a facade applied by later generations.

The area to the northern side of Victoria Street retains a stock of historically important residences and associated outbuildings.  These are small in scale, simple in form and construction, and in general reflect the humble character of the original settlers.  Overall, their German character is evident in their roof form, construction techniques and orientation.

The Hahndorf Founding Families - Place of Residence contains a layout of the Original Hahndorf House and Farm Blocks together with details for each House Block of the current street number and name, plus the original founding owner together with their occupation, originating town and the name of the ship upon which they sailed to South Australia.