The Heysen Sculpture Biennial began in 2000, the initiative of Adelaide Hills artist Helen Lyons.  Lyons was also the founder of Trees Please, the environmental group responsible for the continuing rehabilitation of the tracts of bushland within The Cedars.  From 1912 this property was home to seminal interpreter of the Australian light and landscape, Sir Hans Heysen.

Developing from a dozen exhibiting local artists the event is now a major showcase of environmental art during the Adelaide Fringe Festival. 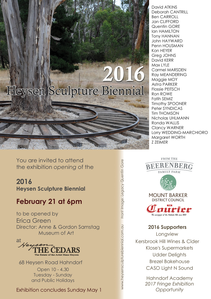 Come and be stirred; exhilarated; amused; intrigued and provoked by the range of works from emerging, mid-career and established practitioners using traditional, contemporary and ephemeral mediums.

Running through until 1 May, 2016 HSB again coincides not only with the final Adelaide Hills International Sculpture Symposium (4 - 25 April; gold coin donation entry) where visitors will watch sculptures in stone taking shape on the ridge at The Cedars but also the Palmer Biennial (Opening 1pm 5 March) at sculptor Greg Johns' property where Hills and Murraylands meet. 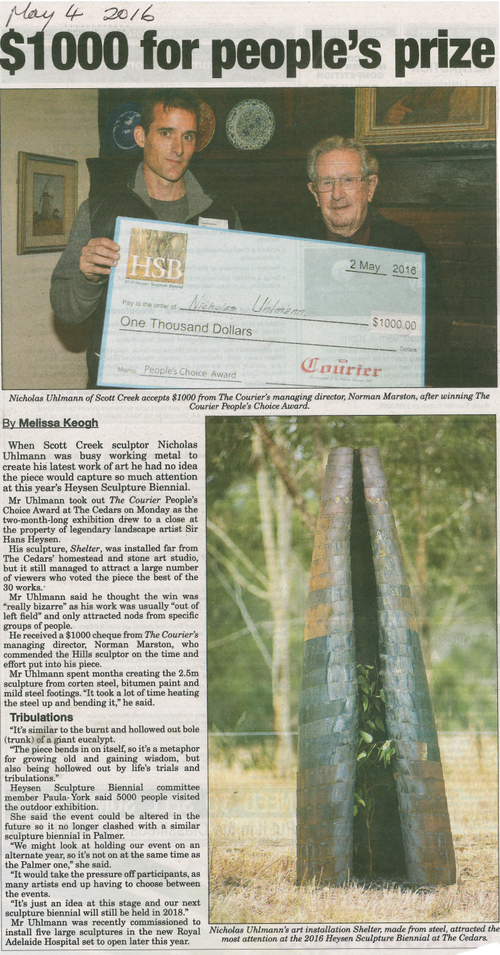 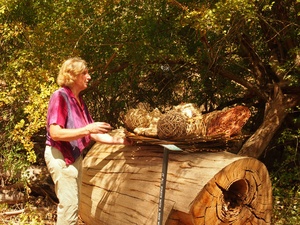 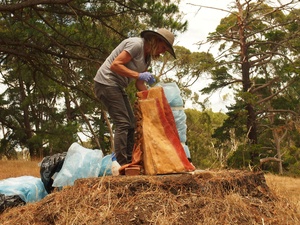 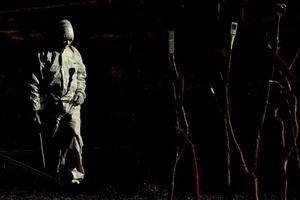 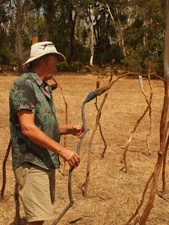 The 2014 Biennial displayed only 40 artworks, the result of a deliberate decision to reduce the significant exhibition area to something more easily viewed during a single visit, making the experience more accessible to the significant number of international and interstate patrons, over 5000 enthusiastic art lovers in all.

Writer of the exhibition catalogue essay, Flinders University's Dr Christine Nicholls, is also the editor of international publication World Sculpture News, so the exhibition received international coverage and was widely discussed in online forum the Conversation, further increasing its stature.

The first Adelaide Hills International Sculpture Symposium  was co-located with the 2012 HSB at The Cedars, attracting thousands of visitors to watch the sculptors at work before touring the 56 pieces on display. This pairing of significant SA sculpture events was again on offer in 2014.

New to the Biennial was the inaugural Courier Peoples Choice Award, won by internationally feted Hills artist Evette Sunset. Sunset is renowned for her subtly evocative work with ephemeral elements of the landscape itself. She is currently at The Cedars refreshing her Fellow Travellers for the delight of visitors to this year's Biennial.

Working in the more traditional sculptural mediums of metal and stone, Astra Parker was the winner of  the Hahndorf Academy 2015 Fringe Exhibition Opportunity, offered to an HSB exhibitor for the first time in 2014. Parker produced an impressive solo show with record sales. Most 2016 entrants -including all from the eastern states -Ben Carroll, Carmel Marsden, Flossie Peitsch, Fatih Semiz and Z. Zeimer,- are keen to be considered for this opportunity to exhibit in the heart of Hahndorf, Australia's most visited town

For further information on the Heysen Sculpture Biennial, including 2014 exhibitors, please access the following:

This was an exciting and innovative exhibition of new works by South Australian Artists to celebrate the Adelaide Festival of Arts!   The artists ranged from those who were in the first Biennial to an ever expanding group of young and established sculptors including three from interstate.

Concern for the preservation of our natural environment was shared by the 56 artists who showed sculptural installations at The Cedars, under the theme of Homage to Nature in the bushland property of famous landscape painter Hans Heysen at Hahndorf.

Many artists constructed their art works using collected natural materials found on this Adelaide Hills bush site.  Others constructed works in their studio and then installed them on the site.  Some featured the use of recycled industrial and rural discards to support the exhibition theme.  Most of the artists who had previously exhibited in the Biennial started their work on exhibits for this outdoor exhibition early in response to the challenges of the show’s theme.

The event ran from 26th February to 29 April 2012; the works were spread over the extensive grounds of The Cedars property and were viewed during The Cedars opening hours at a cost of $4.00, Tues-Sun 10-4pm.  Well-known local artists such as Kym Afford, Pam Kouwenhoven and Silvio Apponyi were participants.