Captain HahnHahndorf was named after Captain Dirk Meinetz Hahn (1804-1860) who brought the Lutheran immigrants to South Australia on the three-masted ship ‘Zebra’ arriving in December 1838.  It is a combination of his name ‘Hahn’ and ‘dorf’ (village).  The name ‘Hahndorf’ was initially suggested by the first special survey partners and enthusiatically accepted by the Lutherans.

There is little doubt that if Captain Hahn had not been involved in the negotiations on behalf of the Lutherans, the village of Hahndorf would not have existed.

Dirk Meinetz Hahn was born on 28 January 1804 at Westerland, on the Island of Sylt, then under Danish rule.  In his Diary he says that he seriously thought of studying theology, but yielding to his father's wishes he became a sailor.  At the age of 15 (1819), he had his first taste of life at sea on the 'Leitium' under Captain Dokker, but illness sent him home after seven weeks at sea.  He then spent several years on different ships trading mainly with Mediterranean ports and made his first voyage to America.  In 1836 he was engaged as first mate on the 'Zebra' under Captain Stelting.  When the latter died at Havana in the West Indies, Hahn was appointed to take the ship home to Altona, where the owner, Mr Dale, engaged him as captain.  On the 'Zebra' he made several voyages to North America with emigrants, also a trip to Bahia in South America, where his ship was caught up in a civil war and delayed with serious danger to itself and its captain.  In the same year (1838) the 'Zebra' was chartered by Sloman & Co. to transport Lutheran emigrants to South Australia. 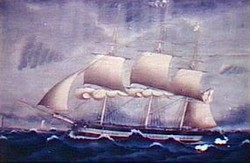 Ship 'Zebra'The Lutherans came from the eastern provinces of Prussia and were emigrating to escape the religious persecution they suffered because of their staunch Lutheran convictions and their refusal to join the Prussian king's Union Church.  On 8 June 1838, they had embarked on river barges at Tschicherzig, travelled down the Oder and the Elbe to Hamburg, where they boarded the 'Zebra' on 29 July.  On 12 August, 106 adults and 91 children left Hamburg and after a voyage of 129 days, the 'Zebra' reached Holdfast Bay on 28 December 1838, but on account of low water, did not reach Port Adelaide until 2 January 1839.

During the voyage to South Australia in the ‘Zebra’, Captain Hahn had become deeply concerned about the future welfare of his Lutheran passengers.  Upon arrival, the Lutherans were subjected to many requests for them to be employed as workmen, farmhands, labourers and servants.  As they had expressed the desire that they remain in a group and not be split-up, Captain Hahn agreed to arrange on their behalf the procurement of satisfactory land for a settlement before he finally departed in the ‘Zebra”.  This initially proved to be a very difficult undertaking.

A few weeks after the Lutherans arrived, the first Special Land Grant (covering the Mt Barker region) was granted to William Hampden Dutton on behalf of himself and his partners Captain John Finnis and Duncan Macfarlane.  Captain Hahn approached WH Dutton regarding the land involved but any requests were not possible at that stage as the survey had not been completed.  This situation changed very soon after as Finnis no longer had any need for the land he was using as a station for his live stock (this land was included in the special survey). 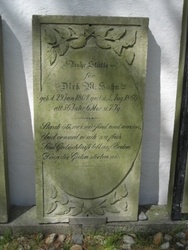 Captain Hahn's TombstoneAfter Captain Hahn had investigated a number of sites and proposals which were considered to be unsuitable, he received an invitation from WH Dutton and his partners to join them in an excursion to view the land that Finnis no longer required.  On 24 January 1839, a party of 18 plus servants and including Captain Hahn, set out to investigate the land in question.  Captain Hahn was so impressed with the site that he immediately asked that the Lutherans be allowed to settle there and he then personally drafted an agreement which he submitted to the partners.  On 28 January 1839, Dutton, Finnis and Macfarlane came to the ship at Port Adelaide and concluded the agreement with the Lutherans.  Subsequently, the Lutherans reached the site in March 1839 after carting their belongings through the bushland.

Attempts to persuade Captain Hahn into staying were to no avail.  When the Lutherans had access to their future land, he considered his mission fulfilled, and sailed back to Altona.  Australia never saw him again.

Captain Hahn left South Australian shores on 14 February 1839 for Batavia and then Altona, where the 'Zebra' was laid up for repairs.  Eventually, after thirty-one years at sea, Hahn retired to spend his remaining days with his family at Westerland on Sylt.  On 24 December 1831, he had married Hedwig Jens Nicolaison.  His family consisted of one son and three daughters.  He died on 13 August 1860.  His tombstone is well maintained today as can be seen from the above photo.