These families were linked by marriage,  Samuel Jaeschke built a bullock-drawn mill at No 54 in 1842.  His brother-in-law Gottlob Linke was a skilled carpenter, tailor and wheelwright. 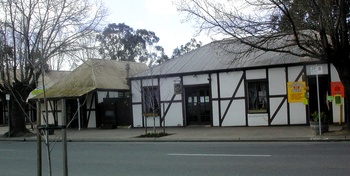 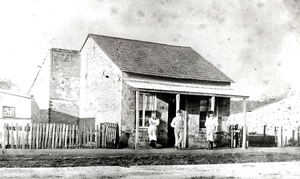 Jaeschke Cottage (pre 1885)Johann Gottlob Linke’s betrothal to Anna Dorothea Jaeschke ensured that the Linke name was amongst the fifty-four founding families of Hahndorf.  It made him eligible to become a landholder, a privilege granted only to married people.  Whether he and Anna were sweethearts in their homeland or were attracted to each other during the voyage to Australia, is unknown.  Researchers disagree on whether the Zebra or Catherina brought thirty-four year-old Gottlob to South Australia.  Members of the Jaeschke family were passengers on the latter vessel which arrived almost a month after the Zebra on 22 January 1839.  Romantic love was not considered a prerequisite for marriage in the Hahndorf community.  More important considerations were the attributes of a suitable helpmate in life - religious allegiance, physical strength, practical skills and if possible, ownership of property.

Gottlob and Anna were married by Pastor Kavel at the end of 1839.  A skilled carpenter, tailor and wheelwright, Gottlob had built a small hut at No. 56 Main Street and had cleared some of the land for crops.  A faded 19th Century photograph of the current building shows a log hut with a roof of wooden shingles in the backyard.  It was probably their first home.  The stone Jaeschke house next door had a similar roof.

Hahndorf’s farmers planted their first cereal crops on the slopes surrounding the village in 1839.  As their yields increased so did the problems of making flour.  Until the mills were erected, grain was painstakingly ground into flour by hand.  Anna’s brother Samuel soon set up a bullock-drawn mill at No. 54 to service this growing industry.  Gottlob’s skills as a carpenter and wheelwright probably aided his brother-in-law’s enterprise which may also have benefitted from the skills of Friedrich Gottlieb Lange, a flour miller.  He had married Anna’s younger sister Johanne Rosina in 1839.

A document dated 11 November 1842 recorded the mill’s mortgage to Duncan MacFarlane for forty pounds and four shillings ($80.40) at 10% interest.  It described twenty-two year-old Samuel’s “Brindle and Bright brindle” working bullocks, “and also all the Machinery and Flour Mill of him the said Samuel Yaeschke situate at Handsdorf (sic) the foresaid together with all the implements gear and other appurtenances to the same belonging ……..”   That was the year that other ambitious souls also constructed mills.  Powered by wind and water, they were both outside the village boundary.

By 1844, the Linke family had 2.5 acres under wheat, 0.25 acres under barley, 0.25 under potatoes, five cattle and two pigs.  Three of their six children had been born.  When the family left Hahndorf between 1853-54 with twelve other families to follow Pastor Kavel to establish Gruenberg in the Barossa Valley, two more children had swelled the brood.  Anna died aged forty-nine in 1862.  Gottlob died in his eighty-eighth year in 1890.  Samuel Jaeschke had married in 1849 and had left for Gruenberg four years later.  A highly successful businessman, farmer and churchman, Samuel died in Appila in 1908.

The Linke and Jaeschke houses remained largely unchanged until extensive renovations were completed in 1973.  Walter Wotzke remembered Linke’s house as having two rooms separated by a large fireplace.  The pug ceiling (mud and straw) was removed, exposing the beams that supported the loft.  Like its neighbour the Jaeschke house, an addition was built and false fachwerk attached to the render that covered the stone walls.  Since renovation, the buildings have housed shops and “Eve’s Classic Coffees.” 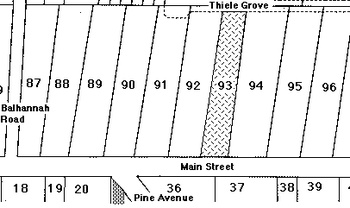 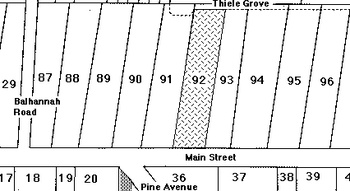