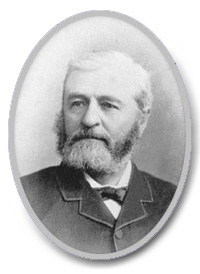 Sir James Penn Boucaut
Entered office Mar 22 1866
Left office May 02 1867
Entered office Jun 03 1875
Left office Jun 05 1876
Entered office Sep 28 1877
Left office Sep 28 1878James Penn Boucaut (later Sir James) arrived in South Australia as a young man in 1846.  He became a lawyer in 1851 before entering Parliament, winning a by-election in Adelaide on a radical platform opposing financial aid for immigration in 1861.  He was defeated in 1862 but was elected to a West Adelaide seat in 1865 when he supported a liberal land policy and advocated protection for South Australian industry.  He then joined Hart's Ministry as the Attorney-General.  Following Hart's resignation, Boucaut formed his first ministry and was immediately forced to deal with Justice Boothby's continued objections to the legitimacy the Colony's Court of Appeal, and persuaded Parliament to petition the Queen for Boothby's removal.  He resigned his position as Premier to fullfil his obligations to clients in the Moonta Mines case of 1867, as his position as Attorney-General constituted a conflict of interest.  He returned to politics in 1868 but was accused of 'bartering his vote for pecuniary consideration' and was defeated at the polls as a result of this in 1869, although he was later cleared of the charge.  He was strongly critical of the government in the period 1872-75 but from 1874 had begun to support widespread development in the State.  The public undertaking he advocated relied on increased population and as a result Boucaut now supported immigration at public expense, a political about-face.  As the member for Encounter Bay, Boucaut gained his second Premiership in 1875, but his visionary plans for the development of transport into country South Australia to improve trade were largely undermined by Parliamentary resistance to new taxation.  His government was responsible for finally instituting free secular and compulsory education, with Bible readings permitted before school hours.  The Ministry was defeated in 1876 but Boucaut's $3 million railway plan went ahead under Colton.  Boucaut was Premier once more in 1877 before he resigned to take up a position on the Supreme Court in 1878.  He was well thought of as a politician and was described as a man of 'imagination, foresight ..... a statesman ahead of his time'.  He retired in 1905 and died at home in Glenelg in 1916.

Extracts of a Newspaper Article printed in the Advertiser 1903 relating to the breeding of high quality Arabian Horses at Sir James' property, Quambi Springs, near Mt Barker.

"At Quambi Springs, near Mt. Barker, is located the famous stud of Arabian horses belonging to His Honor Sir J.P.Boucaut.  In former years there were importations of Arab stallions into Australia, but these all came from India with at least a shadow of suspicion as to their purity of origin.  So enthusiastic was Sir J.P.Boucaut's admiration of the Arabian horses that importation of Arab stallions for grade-raising purposes did not by any means satisfy his ambition, and he determined to establish the pure breed in Australia.  For this purpose he took the greatest precautions to secure none but animals of the purest race, and his importations were from the world known stud of Mr. Wilfred[sic] Blunt, of Crabbet Park, England

"With him were imported the two handsome mares, Elzaba [sic] and Namusa.  The dimensions of the latter are 13 3/4 hands high, 52 in. girth, 14 1/2 in. forearm, 6 1/2 in. below the knee, and 18 in. loin.  Both are handsome bays and are now heavy in foal.  Great interest is centered around the two matrons, Rose of Jericho and Dahna.  The former, a rich blood bay ... shows quality combined with substance to a marked degree ... Dahna is a beautiful brown ...  Both are admirable specimens of brood mares.  The other noteworthy Australian mares are Sherifa, Keheilet, Labadah and Sadde [sic].  Sherifa is a beautiful molded mare by Rafyk from Dahna.  Twice she has been to Mr. Austin's imported stallions, Maboab [sic], and also to his latest import, Magistrate.  The progeny of the latter mating is now a beautiful [mare in] foal to Faraoum [sic].  Owing to the mares being heavy in foal and in a condition more in keeping with good sense than show yard purposes, The Critic refrains for the present from presenting its readers with the photos of the female portion of the stud.  When surroundings are calculated to establish and maintain constitution the beneficial course does not show out stock that run all winter with the sleekness of stable-fed animals."

"Sir J.P.Boucaut is justly termed the high priest of the Arabian cult.  So far he has been the only one who has made a practical attempt to establish the breed of the Arab horse in Australia.  That they are becoming exceedingly valuable to the Australian horse breeders is shown by the fact that in the two years of its existence the Quambi stud has made a name for itself for which it ought to be as justly proud as it is conspicuously famous.  As a reward for his labors, Sir J.P.Boucaut will have the good wishes of every horse lover and every horse breeder throughout Australia."