Theo Auricht , son of Mary Elizabeth [nee Paech, and daughter of a foundation Hahndorf resident] and Christian Auricht.  Theo studied medicine at both Adelaide and Melbourne Universities, followed by a most successful practice in Hahndorf  during the period 1901-1947.

Dr Auricht married Lucia von Bertouch in 1907.  On return from their honeymoon, the following article appeared in “The Register” November 21 1907

“The return on Saturday of Dr T Auricht with his bride from a honeymoon trip to the Eastern States was made the occasion by his friends in and around Hahndorf of presenting him with a wedding gift. This was done at a large though informal function at the Institute Hall. The Hon.  A von Doussa M.L.C made the presentation on behalf of the subscribers.  He said it afforded him the greatest pleasure to act by general desire as spokesperson. The gift showed in a small way the esteem and regard in which Dr Auricht was held by all as a townsman and a medical man ……  The gift took the form of a silver tea and coffee service on a massive silver tray of chaste design, accompanied by a written address with the names of the subscribers appended.”

Dr Auricht used the Hahndorf College building [now the Academy] as a private hospital for a few years.  In 1935, hospital equipment was moved from the Academy to the address now identified as 110 Main Street, the former home of his old school friend, Carl Nitschke. 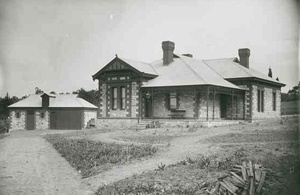 Many of those born in Hahndorf enjoy living here to this day.

One of Dr Auricht’s last deliveries was Ronda Heafield - he told her mother that this would be so on July 6th 1945 at Mount Barker Soldier’s Memorial Hospital.  Coincidentally, Dr Auricht delivered Ronda’s mother, Doris Wiedenhofer, at the Academy in 1923.

As a good townsman, Theo Auricht engaged in community activities beyond the medical practice, even to the extent of owning one of the first motor vehicles in Hahndorf.

Auricht Road, previously Back Road, carries his name; the original house remains on the corner of Auricht Road and Pine Avenue.