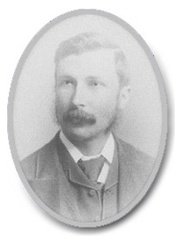 Sir John Alexander Cockburn
Entered office Jun 27 1889
Left office Aug 18 1890The first doctor to be Premier of South Australia, Sir John Cockburn was described as progressive by his peers, but derided as a radical by opponents.  He was selected as the first Mayor of Jamestown in 1878.  He stood for the seat of Burra in the Lower House in 1884, and served as the Minister of Education from 1885 to 1887 before losing his seat and returning as a member for Mount Barker.  He was active in the planning of Federation and argued for a more democratic Constitution.  He served as Premier in 1889 for a year before his government was defeated by a no confidence vote instigated by Sir Thomas Playford.  Sir John Cockburn was responsible for an important land taxation Act and supported payment for members of Parliament, and although he did not often successfully take part in faction politics, he continually fought for adult suffrage, technical and industrial education, and Upper House reform.  He held office in the Holder and Kingston ministries before resigning to serve as Agent-General for South Australia in 1898.  He was effectively fired from this position in 1901 when the post was downgraded to state agent, although he remained South Australia's "unofficial ambassador" in London.  He made an unsuccessful attempt to enter British politics in 1904 and was prominent in the financial and insurance circles until his death in 1929.

During his time in politics, and whilst the member for Mt Barker, he lived in the home that had been built by Mr May on the outskirts of the town.