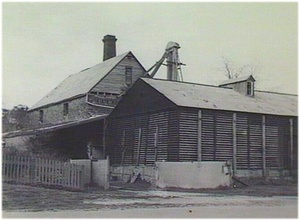 Dunn's Mill, Mount Barker - 1933John Dunn was born on 13 February 1802 in the parish of Bondleigh, Devonshire, England, the son of Charles Dunn, a yeoman farmer.  He was educated at a penny-a-week dame school and at a boys' school in the local area.  At 12 he was apprenticed to a miller at North Tawton to escape military service.  In 1819 he became an 'improver', going from mill to mill in order to learn all aspects of the milling trade.  He became manager of a mill at Bideford in 1830 when the birth of his son John prompted him to keep cows for a supplementary income.  The family was not well off then, and had considered migrating to Canada in 1833, but a rise in wages changed his mind.  He rented his own mill at Monkleigh, near Bideford, from 1835 until 1840 when he was persuaded by four of his six brothers to join them in South Australia (They had all migrated several years earlier).

He gained free passages for himself, his wife Ann, née Rowe (d.1870), whom he had married in 1828, their son and three daughters aboard the Lysander and arrived at Glenelg on 6 September 1840.  Determined to make money, he took up an eighty-acre (32 ha) section of land at Hay Valley (near Nairne), where his second son William 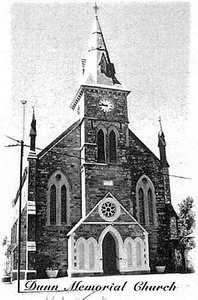 Henry was born and where he erected the first windmill in the colony.  Dunn ordered a steam engine from England and on 1 August 1844 began 'grist' milling for local farmers.  Dunn's mill gave impetus to local development and by 1850 Mount Barker had become a wheat producing centre whilst Dunn & Co., doubling its milling capacity, had bought up surplus grain and begun a flour trade with Adelaide.  In the 1850s trade was extended to the goldfields of California and Victoria and the sugar plantations of Mauritius.  Dunn opened a warehouse and office in Adelaide in 1856 and built a new mill at Bridgewater in 1860.  He acquired two more mills at Nairne in 1864.  On the death of his first wife, John Dunn on 27 February 1872 married his daughter-in-law's sister, Jane Williams.  He retired in 1889 and died at Mount Barker on 13 October 1894.  The firm's eleven mills, five with the most modern machinery, then represented an investment of £150,000.  They annually had an export trade of some 20,000 tons of flour to Britain, Western Australia, New South Wales and South Africa, some 400 employees, and a payment to farmers of £500,000. 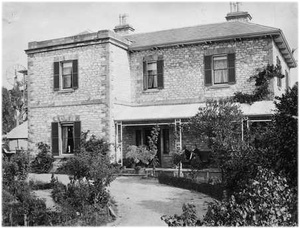 Dunn's House - "The Laurels",  Mt BarkerThe firm's family composition helped its success and also permitted a conscious mood of innovation.  It was the policy of the firm that at least one partner was always travelling.  Thus John junior visited Britain in 1866, 1878 and 1890, the second tour including the mills of South Africa, Austria, Hungary and America.  After his death at Port Augusta on 6 February 1892 his sons Frederick and Alfred took command and the interest swung from mill modernization to the markets of Asia and the Pacific Islands.  The family firm also showed excellent organizational ability.  Following the movement of farmers, five mills were established in northern centres, one in the south-east and the mill at Port Adelaide was rebuilt in 1887; all were built on railway lines and thus linked with the firm's private wharves.  The whole network was pinpointed with some fifty purchasing agents.

The firm's prosperity enabled the family to pursue political careers.  John senior represented Mount Barker in the House of Assembly from 1857 to 1868 when he was unseated by a Court of Disputed Returns for alleged election bribes, and was a member of the Legislative Council in 1869-77.  John junior represented Barossa in the assembly in 1875-77 and the council in 1880-88, whilst William Henry represented Onkaparinga in the assembly in 1875-77.  Of greater note was the philanthropic bent of the family, all of them Methodists.  John senior gave £500 each year to charities, spent £4000 on building the Wesleyan Church at Mount Barker, donated a recreation park to the town, established a university scholarship, built the Salem cottages for aged poor at Mount Barker and, from his estate sworn for probate at £100,000, left some £14,560 to religious, charitable and relief organizations.