John Clement Storey was a long time identity of the town of Hahndorf.  He was proud of his association with Hahndorf, being a great grandson of Captain John Finnis (one of the three partners who originally were granted the land on which Hahndorf was established). 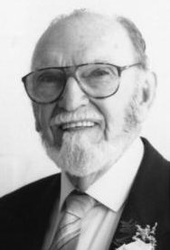 His first marriage was on 18 August 1942 in Sydney, NSW to Nellie Alexina McLeod and they had two children, John Howard and Robert Grahame.  After a divorce, John's second marriage was to Catherine Smeaton on 28 January 1967 at the Wayside Chapel of The Cross, Potts Point, NSW.  John and Cath had two children, Kameron and Kylie Meredith.

As a young boy, John moved to Sydney, NSW with his father before returning to South Australia in his mid-teens to live in the Riverland.  At various stages in his life, John was a printer, cyclist, an itinerant fruit picker during the Depression, and a small business operator in Sydney before World War II.  After discharge from the Australian Army, holding the rank of Captain, he worked for the British Merchant Navy as a stores manager.

Subsequently, he was the first and only Secretary-Manager of Roselands Bowling Club in Sydney from 1947 to 1972.  During this period he was elected Foundation Secretary of the Australian Catering Institute and gave lectures on Bar and Restaurant Management. 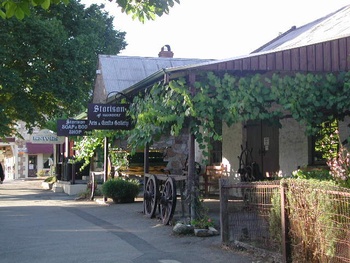 Storison Gallery, Soap and Body Shop (Dec 2000)In the early 1960's, John Storey started the 'Storison' series of businesses in partnership with his wife Catherine and her sister Clare.  The first 'Storison' was a large old terrace home in North Sydney which was converted into a private hotel and was run successfully for 10 years.

In 1971 he moved back to South Australia and in 1972 purchased the original Haebich's Blacksmith Shop (then a motor garage) and Cottages at 71, 73 & 75 Main Street, Hahndorf.  After receiving advice from the District Council of Mt Barker that he should demolish the buildings and build a modern shopping centre, he proceeded to convert the buildings into The Storison Gallery, The Soap Shop, The Doll Workshop, and Cottage Accommodation.  John moved the forge and all the original blacksmith tools to an old rustic building at the rear of the shops where he gave school students and visitors lectures on blacksmithing, having previously done a course on blacksmithing himself.

John was passionate about Hahndorf's history and campaigned for almost 30 years to preserve the town heritage and promote appropriate tourism.  Without his exceptional leadership and consistent voluntary work, Hahndorf would have lost much more of its historical streetscape.  Together with Anni Luur Fox, he represented the Hahndorf National Trust Branch at the Planning Appeals Tribunal, when dialogue with developers, politicians and municipal authorities failed, and was instrumental in raising public consciousness regarding the value of tangible history to state and nation.

There are a considerable number of projects he either initiated or in which he was involved that have enhanced or preserved the locality.  Some of John's activities and achievements were:

In the July, just prior to his death, John received the '2001 Tourism SA Volunteer of the Year' award from the South Australian State Government.  After John died of cancer on 2 September 2001, aged 85 years,  he was posthumously awarded the Centenary Medal in 2003 from the Prime Minister for his contribution to Australian Society.  Also, a road in Hahndorf was named  in his honour by the District Council of Mt Barker.

John Storey walked at least five kilometers a day until his illness in 2000, climbed Uluru and accomplished Street “firewalking” at 83 years of age.  He was a man of utmost integrity with strong family ideals and maintained a keen interest in early South Australian history, particularly the exploits of the early Australian pioneers.

Cath Storey, originally from Sydney, came to live in Hahndorf with her husband John and sister Clare in 1972.

The youngest daughter of a tailor and tailoress, she was a true entrepreneur with admirable creative output.  Business initiatives for Cath, John and Clare included running a childcare nursery and guest house in North Sydney before establishing involvement in numerous enterprises in Hahndorf.

She was an award-winning reproduction doll-maker and facilitated workshops in exquisite miniature accessories, including a velvet evening purse, ladies travelling valise, and carpet bag trunk.

Both Cath and Clare were heavily involved in the inception and running of the annual St Nicholas Night in Hahndorf, making the St Nicholas and Black Peters costumes which are still used each year.

She was an excellent cook and generous host.  She exhibited exceptional fashion sense and received compliments on her style wherever she went.  She possessed remarkable inner strength in the face of numerous health challenges and never once complained.

Cath dearly loved Hahndorf and being part of the special community of friends and traders and was a great supporter of the HCA Village Voice.