Kaesler Brothers was established in 1905 when Ewald and Reinhold Kaesler bought Starick and Wiese's Coach-building and Blacksmithing business.  They soon diversified from blacksmithing and coach-building into motor repairing and general engineering, inventing and building various types of machinery.

In 2007/08 the Kaesler buildings were demolished and the site converted into the IGA Supermarket and a number of speciality shops plus a carpark area.

An End of an Era for a Hahndorf Icon

The name of Kaeslers is synonymous with Hahndorf.  For over 100 years and four generations the large block of land on 13-15 Main Street, Hahndorf known as Kaesler Brothers has been a pivotal site for agricultural machinery magic. 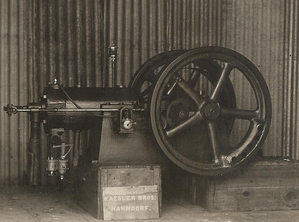 In 1905 Ewald and Reinhold Kaesler from Tanunda purchased Wilhelm Wiess's blacksmithing business.  Later two other brothers, Martin and Heinrich joined the firm.  Together the Kaesler Brothers moved from blacksmithing and wheel making into the petrol engine era.

It is said that Reinhold had an inventive mind and as an era of mechanised farming was dawning and with the addition of Lance and Rex to the firm, the family grabbed the initiative in the agricultural world for developing the subterranean clover threshing machine, the potato digger, sorting machine and the tractor mounted fork lift.  The latter is now used by fruit growers across the Adelaide Hills when moving pallets of fruit.

Innovation did not stop with Reinhold.  Hydraulic nets suitable for harvesting olives were added to the list of achievements by John in recent times. 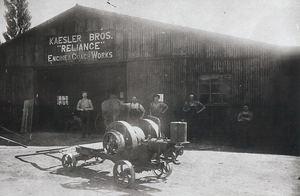 Kaesler Bros 'Reliance' Engine & Coach Works 1908Cousins John and Graham Kaesler and respective families have recently decided to take a hills change!  On the 23 June 2006 it was a very busy day at Kaesler Brothers when current historical machinery and tooling was auctioned, enticing large numbers of curious and interested persons to the shop.

It is pleasing to note that the Kaesler Reliance Engine was purchased by the intended new site owners with the intention of displaying it in the new development.  **

The family has always been community minded.  Martin served 50 years on the Institute Trust committee and Rex is a member of the Cemetery Trust today.  Lance was heavily involved in the Hahndorf Football Club with son Graham over the years.  Kaesler Brothers have supported the Hahndorf CFS with John and Graham being volunteers.  All matters of community assistance have been offered over the past 100 years, no matter how unusual.

** (Note: unfortunately, the display of this engine never eventuated - its current location is unknown). 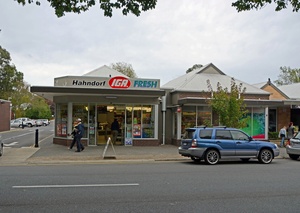 IGA Supermarket [photo John Buchan]The site was originally developed by Freidrich Wiese who settled in Hahndorf in the early 1850s.  He constructed a small smithy there which he later developed into a very successful coach building and blacksmith business in conjunction with his son, Wilhelm August Wiese.

In late 1905 the business was sold to brothers Georg Ewald and Reinhold Emil Kaesler, the 5th and 6th sons of a farmer from Langmeil.  They had grown tired of working on their father’s farm and had realized that they could make much more money making farm implements than they could using them.  They had apprenticed at Linke’s blacksmith and wheelwrights workshop in Moculta near Truro and were keen to start their own business, despite predictions from another Hahndorf blacksmith that the enterprise would be a failure.

It wasn’t. In fact the Kaesler brothers were enormously successful and the business quickly grew with two more brothers, Johann Heinrich and Martin Gotthold also joining the business.  Quite inventive the Kaesler’s are credited for creating the Reliance Petrol Engine in 1912, the first thresher for subterranean clover in 1925, the first potato digger to not only harvest the vegetable but gather them to be sorted on the one machine, and a deep well pump head for beam-type irrigation pumps.

In 1949 Martin’s sons, Lance and Rex took over the business, continuing to invent new machines including a tractor mounted fork lift.  Their sons, John and Graham took over in 1980 and diversified the business, beginning to operate an automotive repair shop at the site.  The business stayed in the Kaesler family right up until 2006.

Today the original factory complex has been converted into an IGA, gift shops and a real estate agent. 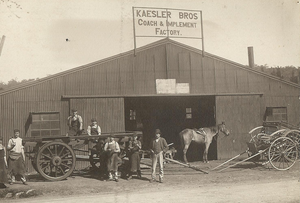 Ewald Kaesler, Harry Kaesler, Bill Molen, Martin Kaesler, Reinhold KaeslerEwald and Reine were the first Kaeslers to come to Hahndorf.  They bought Wilhelm Wiese’s blacksmith shop and made trolleys and traps as well as doing general blacksmithing.  Reine designed engines – 31/2, 41/2 and 8 HP stationary petrol engines – cut chaff, saw firewod, pump water and then clover threshers. Kaeslers had to get their brothers Heine and Martin to join them because the business expanded so rapidly.

Ewald kept the firm’s books at night from details kept on blackboards in the workshop, filled in as jobs were done.  Until WW2, Ewald also did motor repairs, with Vic Klose to help him.  Kaeslers decided to close this business, which Vic Klose bought and opened his own garage on land bought from Kaeslers in Auricht Road.

Heine Kaesler operated lathes and milling machines.  He also did general repairs on farm machinery etc. Kaeslers could make their own spare parts.  Later this business gradually fell away as people did their own repair work with electric welders.

Martin Kaesler made the woodwork on clover threshers, and also wooden vats for spray carts.  Wood had to be used, because the arsenic of lead ate into metal spray vats.  Great Hahndorf Institute man – used to tune the Institute piano himself to save money.

Martin Kaesler’s son Rex also helped with motor repairs until he joined the Army in WW2.  After the War, he made fork lifts for the apple and potato industries.  His brother, Lance Kaesler, worked the lathes.

Reine used to say Throw it in the creek when people brought their repairs to Kaeslers.  Especially during petrol rationing, people stayed at Kaeslers until repairs were done.  Kaeslers were very obliging in emergencies.  The brothers all asked Hahndorf people of any age to call them by their Christian names, but insisted that outsiders use the formal Mr Kaesler title.  All employees received the basic wage and also their share of the profits – no money kept aside for the purchase of new machinery and equipment.

German Dick Jaeger came to SA on a windjammer which was engaged in the grain trade – he used to say that it took a fortnight for a ship to be loaded in SA, but just one day to unload in Hamburg harbour.  Dick jumped ship and found his way to Hahndorf, where he worked lathes at Kaeslers for the rest of his working life.  Bill Molen, a blacksmith with Haebichs, joined the firm as a blacksmith.  He made chassis for potato diggers, as well as general blacksmithing work.  After he retired, he used to come back for several days a week to sharpen plough shares.

Ewald and Martin Kaesler had good sense of humour, Heine Kaesler was more serious.  He served Hahndorf for years as special constable.  Ewald Kaesler good friends with Gus Nitschke and used to go to Mannum when Gus visited his girlfriend Ida Werner who worked at the Pretoria Hotel.  Ewald spent the day duckshooting while up to his neck in water. 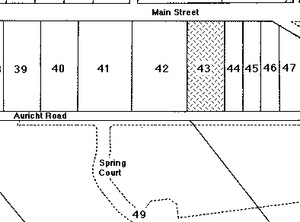