Extract From Aldine History of SA 1890 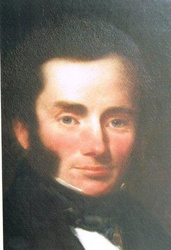 Lachlan MACFARLANE was born in the county of Argyleshire, Scotland, in the year 1806, and is a son of Thomas MacFarlane, grazier, of the same place.  It was first intended that he should be brought up to the medical profession, but owing to his health failing he inclined to outdoor employment, consequently he entered upon farm life.  In 1840 he came to Sydney, New South Wales, and, after a short stay in town, bought up some live stock, with which he travelled overland to Melbourne; here again he remained for about six months, and then, crossing over into South Australia, came to Mount Barker, and here began farming operations, which occupation he continued to follow for several years; he was a justice of the Peace for the colony for many years, and then resigned his commission, and he was also a district councillor; he has now given up all active employment, and is living a quiet retired life.  Mr. MacFarlane married in 1845 Louisa Lubasch, and has a family of four children. living.

Extract From Pastoral Pioneers of SA

In May, 1840, Captain Davison was made a magistrate, and he devoted a good deal of his time to court duties at Mount Barker.  In 1853 he was appointed a Police Commissioner, Police Magistrate, and Stipendiary Magistrate, and presided over the courts at Gumeracha, Woodside, Mount Barker, Strathalbyn, and sometimes Port Elliot.  He was mainly instrumental in having St. James' Church of England built at Blakiston, and contributed £400 to the endowment fund. Mrs. Davison laid the foundation stone on October 2, 1846. Captain Davison was chairman of the Board of Road Commissioners for his district, his colleagues being Robert Davenport, Edward Stirling, Lachlan MacFarlane and Thomas Lambert.

Land Dealings in which Lachlan MacFarlane Was Involved  (From Reg Butler)

MACFARLANE, Lachlan gentleman, Mt Barker Trustee land in Mt Barker ‘upon certain trusts for the Presbyterian Church … a cite [sic] for a Presbyterian church, school house and residence for a minister for said church’ 1851 - (Memorial 441/36)

MACFARLANE, Lachlan hotelkeeper Mt Barker. He leased the Oakfield, 'together with all stables, outbuildings, sheds and Yards connected therewith, also all the gardens at the back of the Hotel and the paddock known as the lucerne paddock', to Hermann APPELKAMP innkeeper Kanmantoo, for seven years from 1869 at the annual rental of (pounds)120. The two parties also agreed that H Appelkamp would 'erect or cause to be erected a balcony along the whole of the front of the said hotel' during the first year of the tenancy -(Memorial 224 / 243)

To Trustees - /8/1851  Newland, Gwynne, Macfarlane & Finnis to Lachlan MacFarlane gent Mt Barker, Walter Paterson farmer Mt Barker and John James Bonnar gentleman Mt Barker, with Lot 84 and part lot 85, ‘upon certain trusts for the Presbyterian Church … a cite for a Presbyterian church, school house and residence for a minister for said church’.  A cost of 10/-.

To Trustees - /8/1851  Newland, Gwynne, Macfarlane & Finnis to Lachlan MacFarlane gent Mt Barker, Walter Paterson farmer Mt Barker and John James Bonnar gentleman Mt Barker, with Lot 84 and part lot 85, ‘upon certain trusts for the Presbyterian Church … a cite for a Presbyterian church, school house and residence for a minister for said church’.  A cost of 10/-.

/9/1840 To Richard Francis Newland and Edward Castres Gwynne Esquires Adelaide, upon trust for sale.  The Trustees sub-divided the allotment.

/8/1851  Newland, Gwynne, Macfarlane & Finnis to Lachlan MacFarlane gent Mt Barker, Walter Paterson farmer Mt Barker and John James Bonnar gentleman Mt Barker, with Lot 84 and part lot 85, ‘upon certain trusts for the Presbyterian Church … a cite for a Presbyterian church, school house and residence for a minister for said church’.  A cost of 10/-.

LUBASCH, Gottfried (1789-1856).  A native of Brandenburg, Prussia.  Gottfried Lubasch had served in Napoleon’s army in Russia in 1813, where he saw the burning of Moscow.  Twice married, Gottfried had a family of five daughters, all of whom eventually came to live in SA.  The Lubasch family emigrated aboard the Zebra to the colony in 1838.  Gottfried was Hahndorf’s first hotelkeeper, mailman and policeman.  Later, he farmed between Hahndorf and Balhannah.

Lachlan McFarlane was born in Argylshire in 1806.  He came to Sydney in 1840.  He brought livestock overland to Melbourne.  Six months later he came to Mount Barker where he started sheep farming.  He was amongst those who employed the young German women from Hahndorf to shear their sheep.  He married one of these young ladies, Louise Laybasch (misspelling) on February 24 1845.  He was 37 and she was 20 years of age.  The marriage was celebrated by the Rev. Robert Haining at Clanferzeal near Adelaide.  The witnesses to the marriage ceremony were Dougald McDougall, Andrew Murray and Catherine Helen Spence.  A child John died on July 11 1856, one month old. John Walker, surgeon, gave a burial certificate.  Lachlan MacFarlane built one of the most pretentious buildings in the State, and named it the Oakfield Hotel.  Later this building was sold to Robert Barr-Smith, who renamed the beautiful building Auchendarroch, and used it as a Summer residence.

(Note: This building was considered to be the most pretentious building in the colony at that time and is currently owned by Wallis Cinemas who have extended it and use it as a picture theatre, tavern and function centre)

Extract from: 'HAHNDORF - A Journey through the Village and its History', by Anni Luur Fox

The German Arms Hotel was established as a coffee shop by Gottfried Lubasch and his second wife Anna Dorothea in 1839, the year that Lutheran refugees founded the village of Hahndorf.  At a time when all settlers were busy trying to clear the land of native bush in readiness for planting crops, this seemingly rash venture was well thought out by the 49 year-old entrepreneur.  The main track to Melbourne went past his front door and the South Australian Company hut and stockyards for spelling animals after their long journey from the eastern colonies, were directly opposite.  Until this section of land was opened up for subdivision in 1849, Hahndorf developed only on the north eastern side of the main road.  Lubasch’s coffee shop stood at No 80-82, across the road from the current hotel at No. 69.

The Lubasch family enterprise quickly gained a reputation for its fresh bread, sweet fresh butter and delicious smoked bacon.  A licence to sell wine and spirits in 1839 soon added to the clientele at “The German Arms.”  One pioneer traveller recorded in his memoirs the delights of lying on freshly mown hay in the barn, being lulled to sleep by Christmas carols wafting over the fields from the Lutheran church nearby.  As they grew up, Lubasch’s six capable daughters helped to run the hotel and his other enterprises including a mail run to and from Adelaide.  By her superlative skill as a sheep shearer, Johanne Dorothea Louise attracted the attention of Lachlan MacFarlane, who became a prosperous landowner.  After marriage they built the first part of the Oakfield Hotel in Mt. Barker which was later developed into a mansion called Auchendarroch by Robert Barr-Smith.  A seventh daughter came to South Australia with her husband in 1855, a year before her father died.

The S.A. Register of 4 August 1851 described the Arms as “ a small comfortable house, snug and clean, exceedingly well-conducted and more quiet than inns usually are.”  James Ide had become publican in 1849 and had kept up the well-deserved reputation until his death in 1851.  His widow married Francis Robert Hunt who took over management of the hotel.  She died in 1859.  A fire destroyed much of the original hotel building in February 1861, the year that the widower Hunt remarried.  His brother-in-law, Thomas Ide, was in charge in 1865 when the grand new hotel was completed across the road at No. 69 Main Street.

Although the town (Mt Barker) was not laid out in 1840, the local council was not established until 1853.

A DEPARTED PIONEER – One of the earliest colonists and pioneers of Mount Barker died on Saturday in the person of Mr Lachlan Macfarlan.  The deceased gentleman, who had attained the great age of 86, arrived in Sydney from Scotland in 1839, and a year later he brought a large flock of sheep over-land to Mount Barker for Mr Duncan McFarlane.  Mr Lachlan Macfarlan then settled here, and soon after he married a daughter of Mr Lubasch, of Hahndorf, and they had a family of five daughters and one son.  Mrs Macfarlan survives her husband, and the children now living are Mrs James Linklater of Adelaide), Mrs N.A. Williams (of Broken Hill), and Miss Macfarlan (resident in Mount Barker), and Mr T. Macfarlan (who is also living at Oakfield Farm).  Another of the daughters, now deceased, married Mr T. Williams, of Moorak, Mount Gambier, and a fifth daughter died unmarried.  The late Mr Macfarlan, who was a large landholder at Mount Barker, built the Oakfield Hotel here and kept it for a number of years.  He disposed of the place to Mr R. Barr Smith, who converted it into the present handsome mansion.  Mr Macfarlan, who was a very hale and strong man when in his prime, being possessed of exceptional muscular power, was a justice the peace for many years, but of late had led a retired life.  The funeral took place at the Blakiston Cemetery on Monday, the burial service being conducted by the Rev. J. W. Gower.  Among those present at the grave were the son of the deceased (Mr T. Macfarlan), Mr Linklater (son-in-law), and Messrs John Dunn, J. P. , Thomas Paltridge, J.P., C. Jaensch, and F. T. Liebing.

The late Mr MacFarlan – with reference to the death of Mr Lachlan MacFarlan, our Mount Barker representative writes :--

“The deceased gentleman, who arrived in Sydney in 1839, brought a large flock of sheep, and travelled them over to Mount Barker, arriving here in 1840.  In coming over, much to his regret ever after, he missed the best lands of our South Eastern country – viz., Mount Gambier and district.  He had lost most of his flock of sheep by the time he arrived here through various causes, and had to start his life afresh.  Soon after he married the daughter of one of the earliest settlers at Hahndorf – Miss Lubasch, who still survives.  They had a family of five daughters and one son.  The eldest daughter married Mr James Linklater, the second daughter Mr Thomas Williams of Moorak, South East (since dead).  The third daughter is single.  One daughter died unmarried, and another is married to Mr N. A. Williams of Broken Hill.  The only son (Mr T. MacFarlan) is at present residing at Oakfield Farm, Mount Barker.  The late Mr. MacFarlan was a very hale, strong, and robust man, and in his younger days a powerful athlete, lifting at times weights that no ordinary man could lift.  He purchased several blocks of land in Mount Barker.  He was a Magistrate for a number of years, and a very keen and observant reader of human nature.  He built the Oakfield Hotel in this town, and kept it as such until he disposed of that portion of his property to Mr R. B. Smith, who so added to this building as to make it a very handsome summer residence.”

Death of Mrs L. Macfarlan – Residents of Mount Barker learned with regret on Wednesday afternoon of the sudden death from heart disease of Mrs Macfarlan, of 'Oakfield'.  The deceased lady, who was a daughter of the late Mr. Lubasch and was 75 years of age, came to the colony nearly 60 years ago, and prior to her marriage with Mr. Lachlan Macfarlan resided at Hahndorf.  For a number of years Mr. and Mrs. Macfarlan kept the Oakfield Hotel at Mount Barker, and they will be remembered by all old residents of the district.  The surviving family are three daughters and one son, while there are five grandchildren.  The funeral will take place at the Blakiston Cemetery this afternoon.