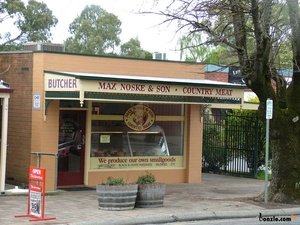 A Brief History of How Max and Jan Noske, together with Son Tim, provided Hahndorf With Such An Excellent Butcher's Shop!

If you want top quality country meat at a regular butcher price, go to Max Noskes!  Not only does Max Noske's sell excellent fresh meats but they produce their own smallgoods and hams.  Their Christmas hams are highly sought after and you won't get anything like it in the supermarkets.  Good old fashioned customer service.

The  butcher’s  shop  in  the  main  street  is  the  life’s  work  of  Hahndorf’s  renowned  butcher Max Noske and his wife Janice.   When Max established the shop in the centre of Hahndorf in May 1968, two of their four children had not yet been born.

Jan NoskeSince then the Noske’s have raised their family, Michelle, Joanne, Allison and Tim, and expanded the business to include a smokehouse on their property in Hahndorf.  “It was a busy time establishing the business and the family in tandem more than 40 years ago ‐ but we wanted to work hard to make the business a success and pass it on to future generations.” 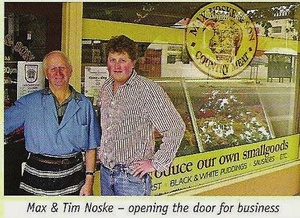 Son Tim, an award‐winning apprentice in the 1990s who toured the US butchery industry before returning to Hahndorf, now runs the business with the assistance of four other staff.   As recently as 2012, Tim travelled extensively around Munich in Southern Germany to observe traditional sausage‐making techniques.  At home, he has developed a 200ha cattle and sheep property at Mt Torrens to further streamline business operations.  On most working days Max still lends a vital hand with the business, but without the long hours and heavy responsibility he shouldered before his semi‐retirement. 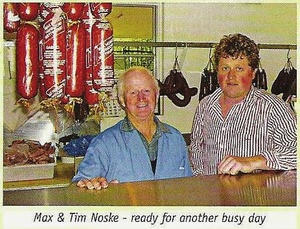 When Max and Jan opened their shop at 78 Main Street it was a homecoming of sorts for Jan.  She grew up at 117 Main Street with sister Marilyn and parents Richard Hardy and Winifred (nee Newbery) Butler.   Hardy and his brother Oliver were timber millers on the corner of Main Street and Ambleside Road – almost directly opposite Jan’s childhood home.

When Jan married a Noske she knew it was likely to involve a future in the butchery industry.   Jan was happy to work in the shop with Max, while her mother regularly looked after the children as required until she died in a car accident in 1968.   Jan of necessity then had to spend much more time at home caring for the children, but she still kept many of the butchery accounts in order and helped in the shop when she could.

Max’s grandfather, Gottfried Gustav Noske, emigrated, aged three, with his parents Samuel and Anna Noske from Nekla Hauland in the province of Posen, Prussia, in 1847.   The many Noskes/Nuskes who emigrated to South Australia at that time were old Lutherans, living the harsh life of tenant farmers in Posen.  A series of failed harvests, heavy rents and meddling by the King of Prussia who was attempting to merge their beloved Lutheran Church with the Reformed Church, led to the move to Australia.  Samuel and Anna Noske emigrated, along with hundreds of others from Posen in the 1840s and 50s.  After World War 1, Posen reverted to Polish territory and its Polish name, Poznan.  Eventually, grandfather Gustav Noske established a butchery in Lyndoch (see picture).  In time, his son Edwin, Max’s father, with several of his own sons, ran a butchery in Lobethal.  The family say that Oscar, the only son who didn’t become a butcher, was also good with his hands - he made cricket bats favoured by Sir Donald Bradman and other keen cricketers in Lobethal’s cricket bat factory. 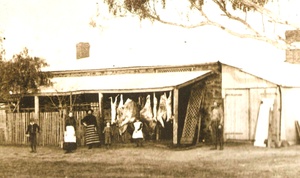 Striking out for himself, Edwin’s son, Herb, decided that his own butchery would open in Hahndorf, with Edwin’s youngest son, Max, employed as an apprentice.  Besides excelling in his trade, Max also became well skilled in associating with his many customers in the shop and while doing home rounds in the shop’s butcher’s van.

Today, the fresh meat cuts at Max Noske and Son Country Meats still reflect the rural background of the family - healthy portions and quality produce, sourced mostly from the local area.  Manufactured small goods specialities such as mettwurst, pepperoni, black and white pudding, pork belly and back strap, originate from family recipes handed down from the Noskes’ German/Polish heritage in Europe.

Max and Jan - now joined by their son, Tim - have remained loyal contributors to the local community - providing meat and especially delicious sausages for Hahndorf’s fund‐raising events, as well as donating time and effort towards many community functions.

Max has said that he hopes the business continues in some form so that the community can benefit from many more generations of Noske Butchers.