The first Primitive Methodist religious services were held under a gum tree on the bank of the Mt Barker creek at the bottom end of Kiaora Street.  This happened in the early 1840's.  When a  Mr. Appleton and his family moved to the area, he was told that "A Primitive Methodist comes sometimes" and "he stands up against that tree".  The Reverend J.B. Austin would also come to the area once per fortnight and preach in a barn near the fledgling town.  The tree, on the banks of the creek near what was Jacobs' factory, that Mr Appleton and his fellow worshippers attended Church under, is long since gone, although as a small child, I was shown where it had stood.

John Dunn, the father of flour milling in South Australia, was a devoutly religious man.  He recalls in his memoirs that the Primitive Methodists had asked for room in which to preach their sermons.  He offered them the front room of his house on Sundays.

By 1847, there were 7 Wesleyan Churches in South Australia, one of those was in Mt Barker.  The first Wesleyan Church in the town was slab hut built on land along Cameron Road near Dunn's mill.  Later, in 1851, the first stone church was built on land obtained for the purpose by the newly elected Church Elders.  This church forms part of what is now the Uniting Church Lecture Hall.  The services in the slab church were conducted by Reverend J. Hall who preached morning and evening, daily.  The Reverend J. Dann, who was only 21 years old, walked to Mt Barker from Adelaide to take over the parsonage of the new stone church.  The Minister's Parsonage was built in 1857.

Dunn Memorial Church, as it stands today, was built in 1881 with money donated for the purpose by John Dunn.  Another building was added in the early 1950's to the right of the new church, on the site which was once the home of Mr and Mrs Walter Simpson, and later Erskine Anderson's shop.  The new building was used for many years as a Kindergarten and Sunday School.  This building was also used for Guides and Brownie meetings and also as a dancing school at one time.

The Littlehampton Uniting Church was originally built and used as a Wesleyan Methodist Chapel.  Some of the locals would alternate between here and the bigger church in Mt Barker. 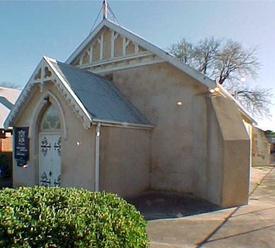 Reverend Robert Haining conducted the first Presbyterian services in 1842 under a gum tree on the bank of the creek at the bottom end of Kiaora Street.  In 1840, when the town was surveyed, allotments for the Presbyterian church were allowed in Hutchinson Street, and the church was built of stone and slate carted from Willunga by John Prentice Hughes in 1847.  Later that year, the building was used as a school and later as a bulk store, and remained so until 1857.

Services were held  in a back room of Low's Inn by Reverend John Gardener.  In 1884, an iron roof was put on the church and the interior decor and a porch added.  The first resident Minister was Reverend James Gordon, who lived in the main street (Gawler Street) of the town.  The church congregation built a home for the Minister and his family, although they didn't live in it until 1859.  The first Trustees of the Church were J.G. Ramsay, Roderick McKenzie, J. McKenzie, Alexander Lyon, James Milne and Peter Bell.

The original church had only candles for lighting, later it had kerosine lamps and eventually electricity.  Over the years, the church has had several alterations made to it, inside and out.  In 1891 a Vestry was built (this was later enlarged), in 1863 a permanent pulpit was installed, an harmonium was installed in 1864 - the harmonist was Miss Eliza Bell.

Sunday school commenced in the church in 1866, the superintendent was Mr Lyons.  Some of the earlier ministers were Reverend J.A. Burns in 1866, Reverend A. Lawson in 1893 followed by MacIntyre, Halford, Riddle and others.  Some of the names associated with this church have been Slaven, McKenzie, and Crompton. 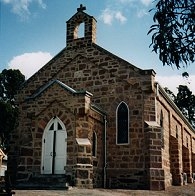 The first Anglican Church in the district was St James' Church at Blakiston, built in 1848 and would have to be the oldest Church in the State still in use as a Church.

St James' Church was built on land donated by Samuel Stocks and George Morphett in the little village of Blakiston.  It sits atop a hill with with its cemetery stretching down the hill in front and to the side of it.  The old manse is off to the left, and is today not used by the minister.

Captain Francis Davison was one of the first trustees of this Church, and Reverend Pollitt, its first minister.  The daughter of Captain Davison, Elizabeth, married one of the longest serving, and last resident ministers, Reverend John Gower.  My grandmother worked for the Reverend and Mrs Gower, as a house maid in her early teenage years.

Christ Church and Meeting HallThis Church was built in 1865 as an off-shoot to St James' Church.  The church was build during the ministry of Reverend Gower and was dedicated by Bishop Short, the Anglican Archbishop of Adelaide in July of the same year.  In 1866, the Christ Church became a separate parish, with its own rector - Reverend W. Ewbank.  Some of the latter day ministers here have included Rector Goodes and Reverend Peter Atherton.

Built in 1874 of sandstone and bricks by Mr A Hendry from Coppin's brickyard at Littlehampton and lying on Stephens Street, the Baptist Church as it was when I was child, no longer exists.  The first services for Baptists were held in the Temperence Hall the Reverend Silas Mead of the Flinder's Street (Adelaide) Church in 1873.  Some of the early deacons of the church were Dr. Hartley Dixon, Mr Hendry the architect and Mr. W. Barker.  The first resident minister was the Reverend E.J. Henderson.  Others have been Reverends W. Dinnis, John Price, F.J. Steward, S. Metters, Frisby-Smith and Bowering.  George Fife Angas was also a regular parishoner of this church when in Mt Barker, and helped financially with the building fund.

The Church has since been sold and turned into a Tavern, Restaurant and Gaming rooms.  The Baptist Church now congregate at the new church on Victoria Road.

The first Catholic Church in Mt Barker was built on the hillside near the Catholic Cemetery and the old Catholic Manse, beyond the Railway Station.  The date of the building of this old church is not recorded anywhere that I have found.  In later years a new church was built on the corner of Kiaora and Mann Streets and is known as Our Lady of Mercy.  In the 1950's, Father McElligott was the priest in charge, later came Father Kelly, Father Joe Grealey and Father Kain among others. 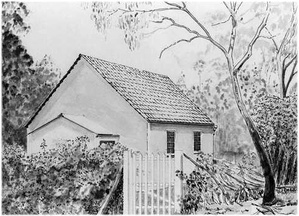 The Society of Friends, or Quakers, as they were more commonly known, had a Meeting House just outside the town of Mt Barker in the early days.  The Meeting House is long gone, but once stood just above the creek near the present day Herbig home.  It was built by Joseph May in 1844.

Today, there are several other churches and meeting halls in the town, although most of them are very recent additions.