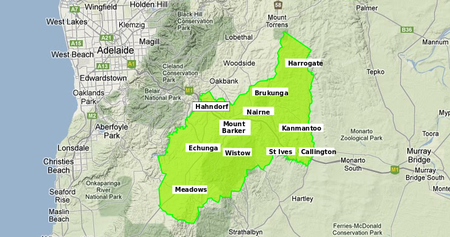 For South Australian colonists in the 1840s, the old Mt Barker District stretched from approximately Macclesfield and Meadows in the south to Mt Torrens in the north.  The District’s eastern borders were the Bremer-Scott Creek headwaters, while the New Tiers directly across the Onkaparinga River marked the boundary to the west.  Mt Barker township lay strategically in the centre of the region.

The total land area of the Mount Barker District is 59,466 hectares (595 Km2 or 230 miles2) which is predominantly rural with rural residential areas, plus rapidly growing urban areas.  The official population for the District was 31,011 at 30 June 2012 which is expected to increase by a further 30,000 within the subsequent 15 years as a result of the South Australian Government's contentious rezoning of 1200 hectares of prime rural land adjacent to the town of Mount Barker to residential in December 2010. 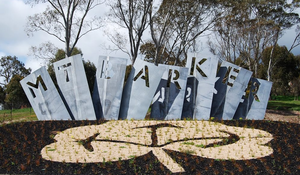 Sign at Entrance to Town of Mount BarkerMount Barker is the main Township located within the picturesque Adelaide Hills Region of South Australia, Australia, and is the seat of the Mount Barker District Council.

Mount Barker is an expanding town in South Australia that is 33 kilometres east from Adelaide (capital city of South Australia) along the South-Eastern Freeway.  It the largest town in the Adelaide Hills Region, and is one of the fastest growing areas in the state.  The population of Mount Barker was 11,809 at the 2011 census.

Mount Barker is close enough to Adelaide that many people commute there on a daily basis, although it is far enough away from the city that people call it "the country".

The Town of Mount Barker lies near the base of a local mountain of the same name, called Mount Barker Summit by locals.  Mount Barker was traditionally a farming area, and many of the lots just outside the town area are still farming lots, although a considerable number of them are increasingly being replaced with new housing and other developments in recent times. 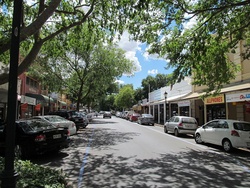 For further information, see the List of Pages tagged