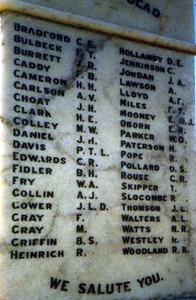 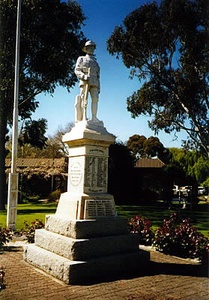 The War Memorial in Mt Barker has been moved from its original spot at the top of the junction of Gawler Street and Adelaide road, to its present home in the garden adjacent to the Council Offices in Mann Street.  As a child, I remember being marched from the school in Dumas Street, down to the corner of Gawler Street, where the local police would have the main road to Strathalbyn blocked off, so that we could all attend a Service on the last school day before Anzac Day (25th April).  The children from all three schools that were operating in the town at the time would be present.  The High School students would be arranged in an arc across the road nearest to the High School (on the Triangle side), the children from St Scholasticas Convent school would be in an arc across Gawler Street, and the Primary School students in an arc across the Adelaide Road side nearest to "bottom" Gilbert's Garage.  We would sing hymns, the sermon would be read by one of the local ministers of religion, and local RSL members would lay wreaths at the base of the monument.  Then two children from each school would lay a wreath in honour of those who fell.  The last post would sound, and the Ode would be recited.

"At the going down of the sun, and in the morning, we will remember them"

The monument to Captain Collett Barker, after whom the Mount and the town are named, has had several homes over the years.  For a time it stood on a grassy area at Dunn Park, but was moved to the top of the main street immediately adjacent to the apex of the Triangle and only a matter of feet from the War Memorial which once stood in the centre of the main intersection with Adelaide Road.  After several vehicle accidents on the corner, it was moved again, to the small garden at the corner of Wellington Road and Maldon Street near the High School, where it stands today.