Education in early South Australia didn't really require the teachers to be formally trained as they are today.  As a result there were numerous schools in the area, run by various people.  I will try here, to outline some of those old educational institutions.  John Banks Shepherdson, who came to South Australia as the first Director of Schools, lived and worked in the town for a number of years. 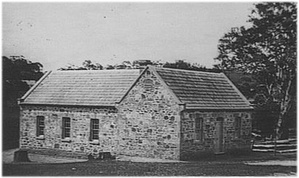 The school was financed by the farmers of the area, and was built on land donated by John Frame. The first teacher was James Shackleford. Each child was required to pay 6d (6 pence) per week for his/her education - although they didn't always pay. Later, between 1901 and 1905, Mrs Mary Madigan taught at this school - her son was Dr C. Madigan, a noted geologist and author.

Part of the building still exists and is now a private home.

This was in Hendon Avenue and built of slatted wooden walls with a thatched roof.  The building and the street in which it stood, no longer exist.

At Blakiston, and on the opposite side of the road to the Church, this school was built in 1848. Only the ruins of it remain today, but it is in the hands of the National Trust. Children used to walk from Mt Barker to Blakiston to attend this school, as it was one of the only schools around at the time which accepted the children of the poorer families.

Mr. & Mrs. McGowan originally had a school in Adelaide, but moved it to Mt Barker in 1843. Mr. McGowan wrote all of his own text books and advertised them for sale across the country. The State Records Office has a copy of one of his texts entitled "First Lessons for Infants in words of one Syllable to Supersede the Dull Spelling Book and to be used even before the Alphabet" - how's that for the name of a book!

Held in the cellar of the Presbyterian Manse, this school for boys was run my the Reverend Alexander Laws. Apparently he was something of a tyrant. The old manse was near the Mt Barker Station. This school existed in about 1850.

This was held in the RSL clubrooms - formerly the Crown Hotel. Members of the Bell family of "Dalmeney Park" were educated there. 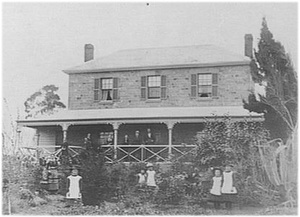 Harrison Ladies' School   c1880Mrs. Harrison ran her academy for young ladies at "Cherrington" for a while, she also had another school in Gawler Street for some time.

The house known as Cherrington was off Hawthorn Road, built as the homestead of a farm owned by William Tonkin, sold to Mr. Teakle who rented the building to Mr. Harrison for the Harrison Ladies' School.

Specialising in writing skills, Miss Conigreve, who wrote books and poetry under the name of Maude Jean Franc, ran a school in Hutchinson street.

Miss Tyrie ran her school in the upper level of the "Claremont Tea Rooms" building on the corner of Gawler Street, opposite the police station. 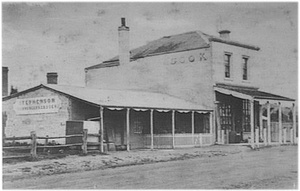 The White HouseThis was held in a building known locally as "The White House" - the house built in the town, just off Gawler Street by Mr Stephenson.

The building is gone now, fallen into disrepair and knocked down in the 1980's. There is a sporting goods store on the site where this building once stood.

This school was conducted by Mrs Walker in the old Methodist Chapel (Wesleyan Chapel), which has long since been demolished. It stood behind and to the right of the present day Dunn Memorial Church in Walker Street.

Melton House school was originally in the charge of Miss Henderson, who later became Lady Downer, grandmother of Alexander Downer the present day politician, and was a select boarding school for the daughters of the wealthy. It was later run by Mrs and Miss Brady.

This was conducted in Harrowfield's House in Gawler Street. This is on uphill side of the Bank SA building. 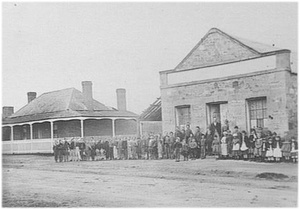 Having grown up in the town, and with a long association and interest in the history of the town, and in particular the parts which relate directly to my own family, I feel confident in stating that this school was in fact held in the under ground rooms of the house built on the corner of Mann and Hutchinson streets, by Walter Simpson, for his wife Mary Ann, and is the only place in the area that it could have been.  The only building in the town to be known as the Lecture Hall, is the building to the left of the Dunn Memorial Church, and to the best of my knowledge there are no underground rooms in that building.

The fact that this school was later run my the Misses Bonnin and Cruikshank, and that they were still running their school long after the introduction of State primary schools, bears out my theory, as these women rented the premises from Mary Ann Simpson - who was my great-great-grandmother.

Dumas' School For Boys and Girls

Between 1854 and 1867 Victor Dumas and his wife used a cottage and a two storied house in Walker Street to hold their school.  Mr Dumas was a Latin scholar, and reputed to be the best in the colony.  His own children went to this school, one of them growing up to become the first editor of the local newspaper "The Mount Barker Courier".

Mrs Price ran her school in Mill House opposite the tannery, the original home of John Dunn and his family.  Students were taught music, painting, drawing and dancing.  She was reputed to be an excellent elocution teacher as well.  When Mrs Price retired, her daughter, Mrs Witcombe took over the music instruction.  Mill House is long gone, but Dunn's Mill still stands today and is now a restaurant and motel.

This was held in the Methodist Church Building, and Ann Mills was the teacher.

The First State Primary School in the town 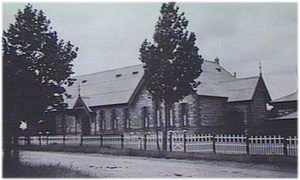 Mt Barker School on Adelaide Road
Three generations of my family attended hereOn Adelaide Road, this building still stands today, and is at present empty and has been sold.  The school was built in 1877.  The first headmaster of this school was Thomas W. Walters.  The school closed in 1965 and moved to a newer more modern building on Dumas Street.

One of the longest serving teachers at this school was Mrs Trigg - she taught there when my mother was a student of the school, and retired the year that I started at the school.

The school building was used for various things since its closure.  The main building housed the Public Library for a number of years, as well as the TAFE administration centre for the local college.  It was also used by WEA as a training center for some time.

The Catholic Church bough some land and a large house in 1900 from Mr J. Hill.  At the time, the property was called "Cro' Nest", and sits on a hill overlooking the town.  Part of the building was demolished in 1920, and in 1927 additions were made to the old building.  It was originally used as a boarding school for Catholic students.  During the war years, some of the local children whose parents were, for one reason or another, unable to afford education, went to this school.  In 1958, the Convent closed as a school, and a new building was erected in 1959 just down the hill from the original building.  The Convent itself, became the residence for the local Catholic Nuns, who were the teachers at the new school - St Scholasticas.  Today, the school has undergone many changes and is still operating, although it now has now reverted to the original name of the first Catholic Church in the town, St Francis de Sales. [Homes & Gardens] 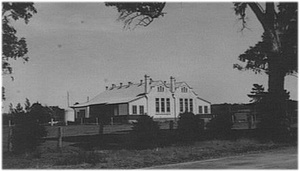 Mt Barker High School in 1928
when my grandmother was a student thereHow well I remember this place! Bottle green winter uniform, three box pleats front and back, white shirt, green tie, bottle green jumper and blazer with the motto "Non Nobis Solum" emblazoned on the pocket in yellow/gold embroidery.

The school started  in 1908 in a corner room of the old Mt Barker Primary School on Adelaide Road, with 37 students and their teacher/headmaster Mr. J.E. Smith.  The class was called "The Continuation Class" and was called that until 1909.  The High School was moved to a new building on the corner of Wellington and Flaxley Roads in 1914, where the main building still stands today.  Extensions to the school were erected in the 1970's and another lot in the 1980's.

Over the years, this school has produced some exceptional students who have gone on to greater things.  Some of those students are: 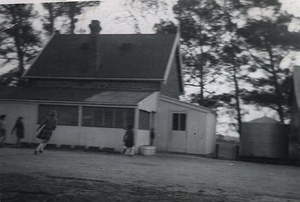 Wistow School in the 1950'sWistow had a little one room building on land next to the Zion Hill Cemetery.  For many years, the school catered to children aged from 5 to 14, and had only one teacher to cater to all grades.  The school closed in 1967 and the children who had attended there were bussed to Mt Barker Primary School, daily to continue their education.  During my father's time at this school, Miss Jarvis was the teacher.

The School still exists but is now a private residence.