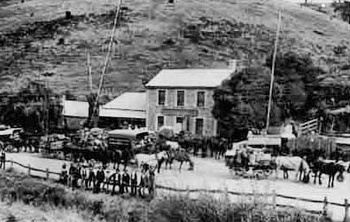 William Anderson was one of Adelaide’s pioneering publicans, hosting the Catherine Wheel in Kensington Village in 1843, and the Traveller’s Rest at Little Para, before establishing the Mountain Hut Inn at Glen Osmond in 1845. 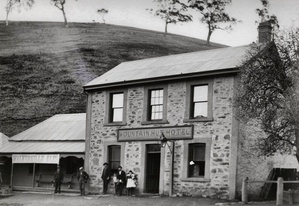 Mountain Hut Hotel  c1900With the surveying, realigning and building of the Great Eastern Road over the Adelaide Hills from Glen Osmond, Anderson had licensed the Mountain Hut Inn as a resting stop for travellers before they commenced the steep ascent into ‘mountains’.  Anderson had a short stay at the Mountain Hut Inn, moving onto other pubs in the Adelaide region.  He returned seven years later to the mountain pass, this time to establish a pub at its summit, rather than at its base.

After Anderson’s departure from the inn, notorious publican, Robert Spearman would take the reins.  Spearman would go down in history as the pub’s most infamous host.  In 1848, he was transported to Van Diemen’s Land for highway robbery upon an unsuspecting customer, Strathalbyn bullocky.

The Adelaide Express reported John Rounsevell’s memories of the Mountain Hut Inn and the notorious publican on August 5 1899  -   “It was kept by a notorious character named Spearman, who cleverly robbed a farmer, but was as cleverly caught and convicted of the crime.  The farmer called at the hotel, and having, been served by Spearman continued his journey, up the hill by the longer way round the Devil’s Elbow.  Spearman followed his man, and taking the short cut, intercepted him and robbed him on the top road.  He got back to the hotel as quickly as possible, and the farmer came back and reported the robbery to the very man who had robbed him.  The police suspected Spearman, and Harry Alford and another constable watched the house.  One night they overheard Mrs. Spearman tell her husband that she had the money sewed in her stays.  Next day a trap with four constables in plain clothes drove up to the hotel, and drinks were called for.  At an opportune time both Spearman, and his wife were arrested, and consented to go with the police.  The lady, however, expressed a desire to change her dress first.  This of course was refused, and later on she learned why the police liked her best as she was.”

The Mountain Hut Inn traded for 60 years as pub.  In 1909 the last publican, W. Forrest, had his licence revoked after local option polling.  The nearby mines had also closed and the passing trade from timber cutters would also have disappeared.  The property operated as the Mountain Hut Temperance Hotel until the mid-1950s and today it’s a pet boarding kennel. 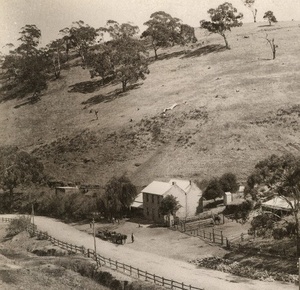 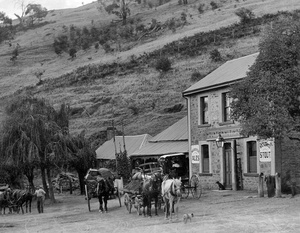 9/3/1849 mortgage of £2,000 to William Younghusband, FH Dutton, Marshall Mcdermott, William Samson, Francis Corbel Singleton gents Adelaide + Percival Peachey Hermitage nr Houghton, an infant under 21. Peter Peachy died intestate 29/8/1849, without having redeemed the mortgage. His son, Percival, survived and inherited. Elizabeth Peachey was the widow. Court case 6/8/1850 & 26/8/1851 John Hart v the Peacheys. Assets had to be sold to satisfy creditors. It took a long time before Sections 1070 and 1277, H of Adelaide were sold.

2/4/1862 Transfer of mortgage from FH Faulding to Very Rev’d James Farrell, Dean of Adelaide, and JB Hughes, late of Adelaide, but now of the Loddon River Vic.

Deposit 257/1854 14/3/1839 Robert Watkins of Arundel gent agreed to lease 640 acres of land in SA to Peter Peachey gent Salisbury Square London. Watkins intended to spend £360 erecting buildings and substantial fencing. From Lady Day 1839 for 10 years at £32 per year and a further rent of £18 a year when the improvements had been erected. Peachy to select the land and spend the agreed amount on improvements. The Mountain Hut most probably was built with this money. Peachey Also had the right to buy the land once the 10 years were finished. Agreement drawn up by Robert Coulson, 45 Lower Brook Street, London.

Peachy mortgaged, but died in late 1849. A Supreme Court case gave orders to sell the estate. Frederic Wicksteed auctioned the land on behalf of the Court on 20/1/1853. James Fitzpatrick of the Mountain Hut Inn bought the property (Lot 16) for £1,220.

Many complicated mortgages on the property.

2/10/1874 Patrick Fitzpatrick died. Letters of administration to Margaret Fitzpatrick. She testified that he was her late husband and his full name was Patrick George Fitzpatrick.

4/12/1881 Michael Fitzpatrick handed his life interest to Margaret Fitzpatrick. He was now a labourer of Glen Osmond. for the sum of 10/- ... and also for divers other good and valuable considerations ...

On 9/5/1842, Elizabeth Williams of the Hermitage spinster lent Thomas Williams £2,100 to buy sections 5551-5562, 5567-68, 5570 Little Para Special Survey, 1,154 acres. This became the Hermitage Estate in the Hundred of Yatala. John Russell and John Williams to use the land for five years. William Younghusband and William James the trustees for the loan.

9/5/1845 Loan to be repaid and Elizabeth Williams to have the use of the land for 500 years. William Younghusband Junr and William James the 1st trustees.

30/4/1844 Thomas Williams declared insolvent. He had handed no interest or principle back to Elizabeth Williams.

30/5/1844 Marriage agreement between Elizabeth Williams and Peter Peachey. Her interest from the Little Para Loan to be for her use only.

11/4/1845 The public assignee, John Hance, ‘well knowing that the said premises are a very scanty and slender security for the principle and interest now due thereon’, claimed that Elizabeth Williams had never lent the money and that no agreement had been made with Thomas Williams. He owed Elizabeth Williams £420 interest. The trustees are remediless in the matter of common law.