Now Julie Wellington, The Candle Shop and the Opportunity Shop. 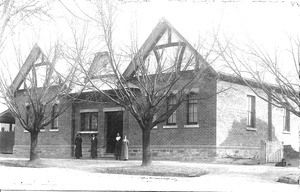 The factory was built in 1912, a subsidiary of the company in Adelaide, and immediately began operating.  Some 50 young women were employed at the factory—many school leavers.  Others, known as “State Girls” came from large families in Adelaide and were billeted with families in Hahndorf.  These families then received financial assistance from the Government. 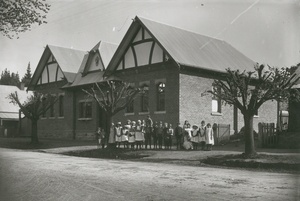 Hahndorf Woollen Mill c1913Maude Sorrell worked at the Clothing Factory for a number of years.  She was a most astute dressmaker.  It is known that the factory 'girls' made shirts and various styles of uniforms.  This was not enough for Maude and every spare hour and every spare hour away from the factory she designed and made her own beautiful and fashionable clothes, preferring such fabrics as linen, muslin and lace, always in white.

Due to the World Wars, wool and cotton fabrics were not available.  In later years, she chose wool fabric from the Lobethal Woollen Mills, where she also worked after the Clothing Factory in Hahndorf burnt down in 1932..

Maude's oldest daughter, Grace, loved needlework.  She was encouraged by her mother to embroider designs on the garment's completed by Maude. Smocking, beading and drawn-thread-work were Grace's favourite skills.

After some years along came Grace's oldest daughter, Beryl, who in turn was encouraged to use the treadle sewing machine, to do needlework and also knitting and crochet work; A so called skill not enjoyed by Beryl was the darning of the family socks!!!

A Mr Dixon was Manager for a number of years;  however, after 17 years as a successful business, the factory closed in 1929.  The building was then rented by the “Glen Ellen” Cannery which operated near Ambleside.  The company stored their products in the ample space of the factory.

In May, 1932, in the early hours, the factory burnt down (4am).  All that remained was the side brick walls.  The gutted building was bought by Jack and Nita Zadow.  A dwelling was erected incorporating the remaining brick walls.  The Zadows had 2 children and Mrs Zadow’s mother also lived with the family; Mr Zadow ran a small shop at the front of their home for a number of years.

The pictures shown of 3 women who worked at the clothing factory most likely made the outfits they are wearing, possibly between 1912 and 1916

Maude Sorrell continued to use her dressmaking skills after she married.  Working from home, using a Singer treadle sewing machine, she drafted and created garments for her family, neighbours and many members of the surrounding community.

Pictures are from the Weidenhofer collection, donated by Beryl Alley, grand-daughter of Maude and Murray Weidenhofer.

More of this story and photographs can be viewed at “Hahndorf Sweets”- 54a Main Street, Hahndorf.