The Mount Barker district developed as a milling centre with the establishment of early flour mills in the 1840s.  The first wind-powered mill in the Mount Barker area for grinding wheat was a mill constructed by John Dunn in 1841 at Hay Valley near Nairne.  The first steam-powered flour mill outside Adelaide was established in 1844 in the town of Mount Barker, also by John Dunn, which ceased operating in 1894.

The Windmill on the Hill - Construction of Frederick R Nixon's wind-powered mill was completed in 1842.  This mill was located on the brow of a hill overlooking the road between Hahndorf and Mount Barker.  This hill was subsequently known as "Windmill Hill".  Nixon's mill opened up an important agricultural area of the State, grinding over half a million bushels of wheat in one season.

Milling at Nixon's site ceased in 1864 as it was no longer able to compete with steam mills.  The mill lay dormant until 1928, when the first renovation of the windmill was carried out.  At this time A.E. Braendler donated the windmill and some surrounding land to the Mount Barker District Council, 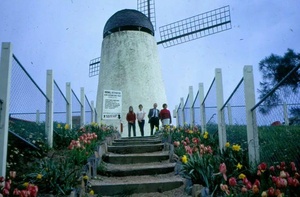