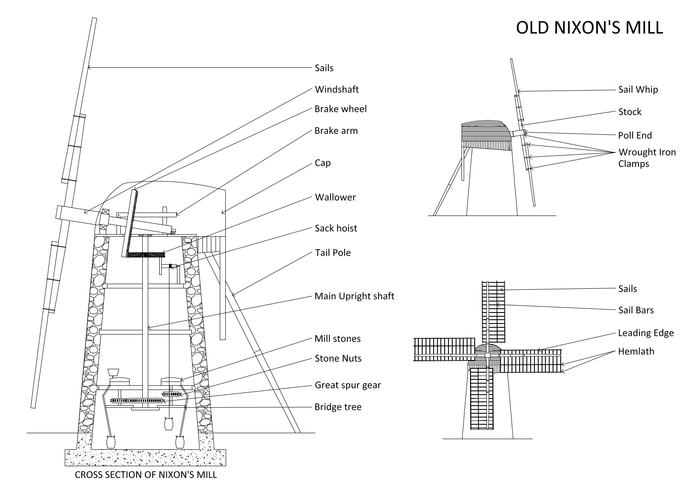 The tower structure is composed of random coursed stone rubble 75cm thick.  It is 9.05m high, tapering from 4.6m diameter internally at the base to 4.15m internally at the top.  There were 4 working levels. One window was at the second level and two windows were at the third level.  There were 2 doors at ground level.

Sail frames were made of hardwood.  Canvas sheets were furled like a curtain to cover different areas of the frames according to wind velocity.  The sail would have had a greater angle at the heel than the tip.  The sails had a sweep of 17m in diameter.  This type of sweep was known as 'the common sail'.

The cap and sails were able to be rotated 360 degrees by means of the long tail pole attached to the wind shaft, allowing the sails to be turned into the wind.  Tethering posts fixed in the ground around the circumference kept the pole in place.

The mill had a large wooden brake wheel connected to the wind shaft that was driven by the wind in the sails.  Wooden teeth on the brake wheel drove the wallower that was fixed to the main shaft.  The great spur gear was connected to the lower end of the main shaft and drove the smaller wooden gears-or stone nuts-making the pair of mill stones rotate.  A system of wooden levers under the stones adjusted the clearance between the grinding stones in response to any change in wind power.  This tentering was controlled with iron ball governors.

Native timbers were used for the machinery.  The brake wheel was Sheoak and the main shaft red gum.

The 1.2m diameter grind stones were imported French Burr.  The mill operated one pair of stones, although there was enough power to drive two pairs.

Grain was lifted to the top by a sack-hoist driven by the wind shaft, or by the miller carrying sacks up the ladders, from the meal floor.  At the bin floor where it was dropped into a smutter where it was cleaned and sieved.  A hopper funnelled the wheat onto the grind stones on the stone floor.  The ground meal was then put through a bolter (dressing mill) to remove any coarse particles before the fine flour was funnelled from a hopper into sacks on the meal floor ready for removal.