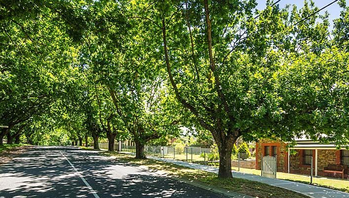 Extract from 'Hahndorf - A Brief Look at the Town and its History', by Anni Luur Fox 1982 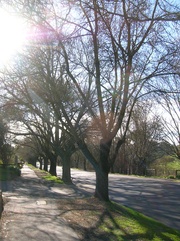 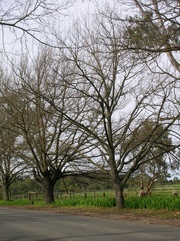 An avenue of trees worthy of note stands in the appropriately named "Windsor Avenue".  These are claimed to have been grown from acorns sent out from Windsor Park in 1937 to mark the Coronation of H.M. King George VI.  Because their growth was stunted by neglect in the early years, the trees give no indication of their age.  Furze, saplings and all kinds of scrub grew around them till about 1953 when the Council had the ground cleared and appointed a local resident to care for the surviving thirty six oaks.

Their claim to be Royal Oaks can be authenticated by several local residents who planted the infant oaks as school children and can still point out their "own trees".

The Windsor Avenue Oak Trees were planted in 1938 to commemorate the coronation of King George VI in 1937. 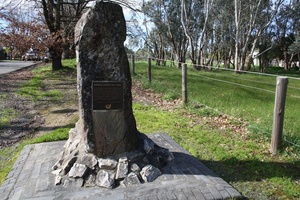 The coronation of George VI and Queen Elizabeth as King and Queen of the United Kingdom and the Dominions of the British Commonwealth and as Emperor and Empress of India took place at Westminster Abbey, London, on 12 May 1937.  King George ascended the throne upon the abdication of his brother, King Edward VIII, on 11 December 1936, three days before his 41st birthday.  Edward's coronation had been planned for 12 May 1937 and it was decided to continue with his brother and sister-in-law's coronation on the same date.

Arbor day was observed at Hahndorf school on Friday.  The head teacher (Mr. Schwartz) gave an interesting talk on bird and tree life, and the children, teacher, parents, and members of the school committee then proceeded to the scene of planting, at the Mount Barker end of the town.  An avenue of Royal oaks was planted by members of the committee and children, the young trees being raised by the head teacher from acorns gathered from the Royal Park at Windsor.  The chairman of the school committee (Mr. G. Nitschke) addressed the children prior to the planting, and said that the avenue was to commemorate the Coronation of His Majesty King George VI.  The first tree was planted by the chairman. 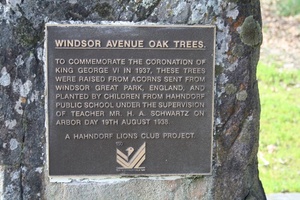 To Commemorate The Coronation Of King George VI in 1937, These Trees
Were Raised From Acorns Sent From Windsor Great Park, England, And
Planted By Children From Hahndorf Public School Under The Supervision
Of Teacher Mr H. A. Schwartz On Arbor Day 19th August 1938
A Hahndorf Lions Club Project.

How my memory stirred after reading the article and letters re Royal Family Trees in the Summer and Winter Editions 2013 of Adelaide Hills Magazine.

The accession and subsequent abdication of King Edward V111 in 1936, the Year of the Three Kings, caused massive dislocation of countless plans throughout Britain and its extensive Empire to celebrate the beginning of a new reign.

Arrangements for the Coronation of the bachelor monarch in Westminster Abbey were so far advanced, that final organisation for the original date of 12 May 1937 had to be adapted to proceed for the new King, George V1 and his consort Queen Elizabeth (later the Queen Mother).  Amid the confusion, no wonder someone forgot to water the hundreds of commemorative seedlings struck from acorns shed by hundreds of oaks in Windsor Great Park, ready for ceremonial plantings in communities across Great Britain.

As a result, masses of acorns swiftly scooped up in Windsor Great Park had to make do for distribution and plantings.  As a result, distant places in the Empire could now join in this venture.  One of South Australia’s representatives at the Coronation, the Director of Education, WJ Adey, heard of this scheme.  He undertook to take a parcel of acorns back home as a way of encouraging the coronation celebrations in the far-off Antipodes to become more real for a pre-TV and mobile phone generation of school children.

No doubt, details of how the acorns were allocated would be printed in editions of the SA Education Gazette later in 1937.  Because so few areas of the state are favourable for growing oaks, I do not imagine that there would have been a great rush to take advantage of this offer, particularly when the acorns had be coaxed to germinate and then grow sturdily enough for planting out in the open.

However, HA Schwartz, head teacher of the Hahndorf Public School, received the news with a creative gleam in his eye.  As a young teacher during World War 1, he and his family, along with so many of his pupils of similar Germanic descent, felt the full emotional involvement of anti-German sentiment against them in South Australian life.  Many people and all places of German origin changed their name; Hahndorf had become Ambleside.  Back in Britain, the new King George V1 of 1936 had exchanged his Saxe-Coburg-Gotha surname for that of Windsor.  However, by mid 1937, Hahndorf had only just had its original name restored a little over a year ago, in a special gesture to commemorate South Australia’a centenary in 1936,.

Carefully, Mr Schwartz planted and tended those precious acorns in a suitable location in his two-storey school house garden securely behind a high galvanised iron fence from the school play ground.  Regularly, in the classroom, the Head Teacher would report on the progress of the special seedlings from the King’s own garden far across the sea.