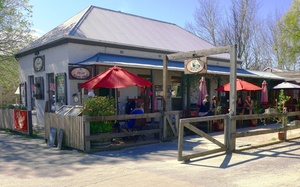 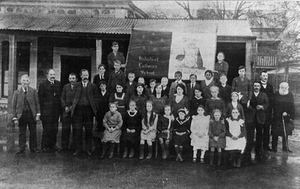 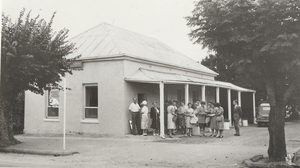 The German settlers were keen for their children to be educated, with the first Lutheran school in Hahndorf being established in 1839.  Classes were held in make-shift locations until, in 1857, the teacher's residence then located next door at 62 Main Street was used.

This building was subsequently constructed with the Lutheran Day School opening in it on 1 February 1871.

All Lutheran schools in South Australia, including Hahndorf’s Lutheran Day School, were closed by an Act of Parliament in 1917 due to the anti-German feeling generated by WW1.

The building was subsequently used as a drapery shop for many years.  On 7 December 1958 it was officially opened as an art gallery but closed when the proprietor (Walter Wotzke) and his wife restored the Hahndorf Academy.  Following uses included a visitor information centre and craft shop (Camellia Country Cottage).

The property is currently owned by the District Council of Mt Barker and leased to a retail outlet.  The intention is that it will be eventually incorporated within a cultural hub.

Extract from 'Hahndorf - A Brief Look at the Town and its History', by Anni Luur Fox (1982) 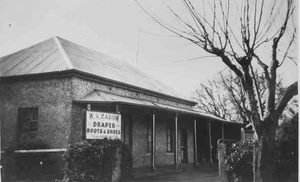 As 'Zadow Draper'  1952One of the initial tasks the new settlers performed was that of establishing a school in 1839, with F Kavel, a brother of Pastor Kavel, as teacher.

Lessons at first were held in the open, progressed then to a make-shift hut, and finally to a large room in a house at 62 Main Street, which was also used as a 'teacherage'.  This old building has since been demolished but for one room, which stands at the rear of the present dwelling which also housed the teacher.  Most of the money was donated by Captain John Finnis.

A later building, which stands next to the Hahndorf Academy in the Main Street, was opened during the 1860's and continued as a school until 30 June 1917, when it, along with other Lutheran Schools in the State, was compelled to close by Act of Parliament.  Despite many explanations, declarations of loyalty, petitions and deputations gving evidence that the schools were not "hot beds of disloyalty", they remained closed.  It was during this time too that German place-names were obliterated; Hahndorf became Ambleside, Blumberg became Birdwood and so on. 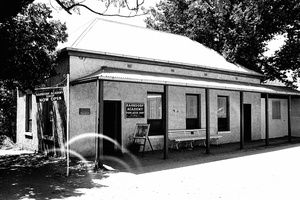 As 'Hahndorf Academy Shop'  c1951After a strenuous struggle the Act was repealed in 1924 but the school did not reopen until 10 February 1946, in new premises situated opposite St Michael's Church.  The school bell had served the church until the  erection of the present bell tower in 1938.  It was one of the many cast in bronze from guns and war weapons in Germany at the conclusion of the Franco Prussian War in 1870-7 by the order of Prince Otto von Bismark.  He and his wife Joanne von Puttkanez were devout Lutherans, and during his office as Prime Minister he presented the Church in Europe with these bells, one of which found its way to St Michael's of Hahndorf.

In 1876, teacher W Strempel had a disagreement with his brother Pastor Strempel, and opened a public school which was for some years conducted in a private house in the main street.  Since this was a Government institution, the teacher was not permitted to give religious instruction.  In 1879 the present public school building was erected with Mr Strempel continuing as teacher until April 1899. 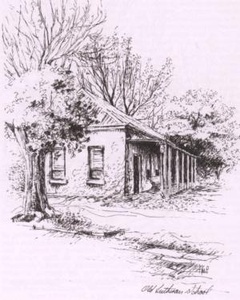 When this school opened in February 1871, it must have been the very latest design in modern schoolrooms of the day.  Teacher Strenz and his pupils had been struggling along in cramped quarters for years.  Their difficulties can be understood if you walk down to the large underground tank behind the school and look through the gate into the backyard of No. 62.  The small stone building which became the schoolhouse in 1854, is still upright.  Before that time, in keeping with Prussian law regarding schooling, all Lutheran children aged between six to fourteen years had their lessons at Hahndorf Lutheran Church in Balhannah Road.  Such compulsory education had been an unusual requirement in a colony where literacy was not considered a vital skill for working class people.

The teacher lived at No. 62, in a fachwerk house complete with kerosene tins of geraniums on the verandah.  Female students came here to learn needlework and other skills necessary for their future roles as mothers, servants or housekeepers.  It was replaced by the current stone building close to main street in 1912.  Many years ago, Alma Paech described the old residence and arrangement of the 1871 schoolroom to me as I scribbled valiantly in my sketchbook to give visual shape to her words.  Reminiscing about her school days, enjoyable despite corporal punishment, she remembered a friend being upset at having to carry home a slate with Teacher Ey’s complaint, “Hulda talks too much.”  Next day she had been mortified to find her father had written in its place, “Use plenty of cane!” 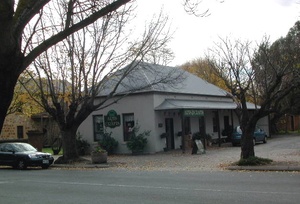 As 'Camellia Country Cottage' 2001The students loved climbing the huge mulberry tree reputed to have been struck in 1861 from South Australia’s first tree planted on Kangaroo Island.  It stood next to the underground tank until 2002.  The students soon learned to remove the tell-tale red marks of ripe fruit by rubbing their faces and hands with green fruit.  No-one played much with dolls.  The girls preferred skipping rope.  Rounders and cricket were favourites with both sexes.  After Hahndorf residents had established a cricket ground in 1887 the sport had increased in popularity with a local team playing matches against teams from other towns.  Having heard Alma’s harrowing tales of early morning chores on the farm before the long walk to school, I was surprised the students had any energy left to play or attend to their lessons.

This school was closed with all other Lutheran schools in South Australia by Act of Parliament in 1917.  Lutheran students transferred to the Hahndorf Public School in Church Street.  To ensure that they received a proper religious education, Walter Wotzke’s father, Friedrich Wotzke, conducted Saturday School at St Michael’s Lutheran Church for many years.  Despite another period of anxiety during World War ll when German ancestry became a liability once again, the congregation opened a new school in 1946, opposite the church in Balhannah Road. 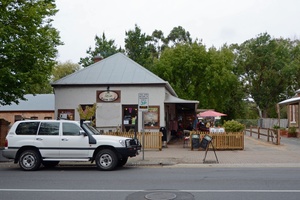 The Farm Shed  2013  [photo; John Buchan]For a period, the school building of 1871 in Main Street housed Zadow’s Drapery Store until Jack and Nita Zadow built a new house with shop attached, over the road.  When Walter Wotzke transferred his “Hahndorf Gallery” from Rodert’s Mortuary to the old school building in 1955, it became famous for the calibre of its artists and Walter’s fight to save the main street trees and the Academy next door from demolition.  Respected artists, including Hans Heysen, Jacqueline Hick, James Cant and John Dowie exhibited there.  A policy which won Walter the Order of Australia Medal for services to art and the community, was his help to young artists establishing their careers at a time when there were few commercial galleries in South Australia.

Because of the prestige of this gallery, Hahndorf was the only country town included in the first Adelaide Festival of Arts in 1960.  Over two thousand people attended the opening of Hans Heysen’s exhibition in this gallery.  For the first time, television cameras recorded an event in this quiet old village.  It heralded the future when Hahndorf’s battles for conservation were rarely out of the news for next thirty years.  In the last weeks of 1960, Walter and his brother Otto mounted a campaign to save the Hahndorf Academy.  Lurching from one crisis to another for six years, it was the beginning of the conservation movement that gathered momentum in the 1970’s and with the media’s help, changed public attitudes to old buildings previously considered to be junk.

This property at 64 Main Street is now owned by the District Council of Mt Barker (having been purchased from St Michael's Lutheran Church) and the current tenants from early 2013 are the 'The Farm Shed'.   Substantial additions and alterations have been made to the building and surroundings by 'The Farm Shed' since this change in ownership.

Article from 'The Courier' newspaper 20 December 2011

Old school a strategic acquisition - A 170-year-old former school in Hahndorf has been bought by the Mt Barker Council.

The old Lutheran school building next to the State heritage listed Hahndorf Academy cost the council $585,000, but it has dubbed the purchase a “strategic acquisition”.  Mayor Ann Ferguson said the ownership of site opened up a raft of opportunities for tourism and cultural development in the historic town for the council.  “The council recognises the cultural and historical significance of this precinct in Hahndorf and the potential to further develop this area as a cultural and tourism hub could not be passed up,” she said in a statement.  “Situated next to the Hahndorf Academy and the (Adelaide Hills) Visitor Information Centre, this original Lutheran school building offers exciting potential for our region. ..... The purchase, from the St Michael’s Lutheran Church, was settled last week. 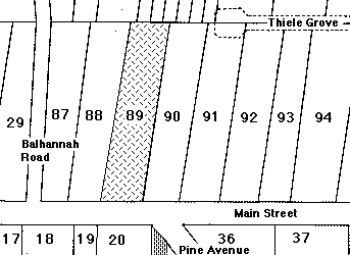