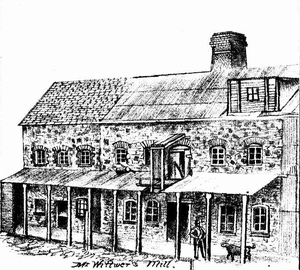 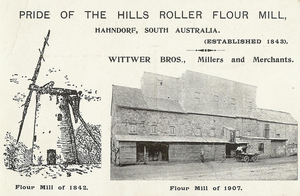 The first steam-powered flour mill was erected on this site in 1851 and operated for nearly sixty years producing brands of flour such as ‘Pride of the Hills’, ‘Windmill’ and ‘Phaultless’.  The mill was built by the miller, F. Wilhelm Wittwer Jnr., one of Hahndorf’s foundation settlers.  After it burned down he re-built the mill in 1854-55.  His three sons carried on the milling business following his death in 1904.  The mill ceased operations in 1912.

Members of the Wittwer family subsequently used the premises for milling chaff and as a fodder store until the late 1960s.  In 1971 the mill was converted to a restaurant by John Gordon.

The house opposite the Old Mill Motel, at 85 Main Street, was built in the 1850s and was F. W. Wittwer’s home for many years.  Its size and style reflect the prosperity of his milling business. 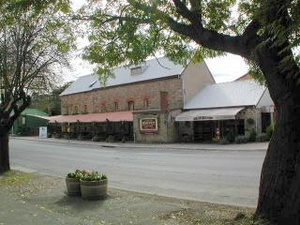 In the early years of the colony, the Mount Barker district was known as the granary of South Australia.  Hahndorf's settlers were the first to grow grain crops in the region and to supply neighbouring farmers with seed grain.  Their hand and foot operated mill was soon inadequate, prompting the enterprising businessmen amongst them to construct more efficient means of making flour. 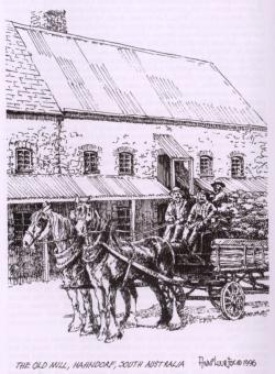 A born entrepreneur, J.F.W. Wittwer amassed a good deal of property and debt in his lifetime. During 1842-43 he built a watermill on the outskirts of the village at the junction of Cox's Creek and the Onkaparinga River.  He was able to repair the mill when it was flooded but when it burned down, he went to work at a windmill halfway between Hahndorf and Mt. Barker erected in 1842 by one of Colonel Light's surveyors, Frederick Robert Nixon.  Wittwer the Elder became the owner in 1853, the year that his son's two year-old steam mill in Hahndorf Main Street burned down when the boiler exploded.

While Wittwer the Elder continued working the windmill, his son rebuilt the steam mill at 98 Main Street in 1854.  The huge red gum pillars were erected by master carpenter, Johann Carl Friedrich Faehrmann.  The roof was of slate.  After Wittwer the Elder died a decade later, his son doubled this mill's capacity by installing the windmill's French Burr grinding stones.  Operated by steam, the mill attracted customers from as far afield as Victoria.  German farmers arrived with sacks of grain loaded on their distinctive wagons with sloping sides painted red, blue and yellow.  Waiting for their turn to unload, the horses were content with nosebags of feed while the farmers enjoyed Mrs. Wittwer's cooking in the two storey home over the road.  This house built in 1861 was considered quite grand for its time.  Some of the farmers stayed there overnight or with family or friends in the village and bartered bags of flour for boxes of fresh or dried fruit to take back to the Murray Mallee.  The steam powered mill operated for nearly sixty years producing brands of flour such as 'Pride of the Hills', 'Windmill' and 'Phaultless'.

The grain industry in the Mt. Barker district waned due to soil depletion.  Once the railway was completed in the 1880's most of the grist was sent by rail from Dimboola near the Victorian border.  When mills were erected in the new grain producing regions, Wittwer's Mill turned to producing chaff and processing wattlebark for the tanning industry.  By that time Wittwer the Younger's three sons had joined the business - Friedrich August, Friedrich Wilhelm and Heinrich Gottlieb.  It was an exciting time.  In 1877 Mr Glover's discovery of the largest diamond ever found in the colony triggered off several searches at the nearby Echunga's goldfields.  At the height of the gold rush in the 1880's, J.W. Wittwer owned a goldmine and installed a battery of stamps to crush quartz, plus gold-saving machinery at the mill.  In a flurry of modernisation the old grinding stones were replaced by new Ganz rollers blamed by many doctors for a decrease in public health.  The perceived culprit was white flour.

F.W. Wittwer the Younger died in 1904.  By 1923 all milling operations were closed down by his sons and the building was used as a wood and grain depot.
In the 1960's the mill's corrugated iron top storey and lean-to were still in place.  They disappeared in 1971 when John Gordon gave the place new life and its new name as a German-style restaurant, 'The Old Mill Restaurant'.  Motel units were also built at the rear.

In 1996 Noel Duffield embarked on an ambitious rebuilding program to operate the mill as a multi-purpose entertainment complex.  Sold towards the end of 1998, the mill continues to operate as 'The Old Mill Restaurant'.

Information from The Hahndorf Allotments Database. 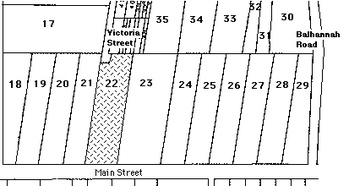