Most if not all residents of Hahndorf would either know Reg Butler personally or certainly would have heard of him.  Reg with his intense interest in people and places and his exceptional knowledge of local history particularly relating to the original Lutheran immigration to Hahndorf has imposed a strong and highly respected presence and authority.  His broad historical research and knowledge encompasses the whole of early South Australia. 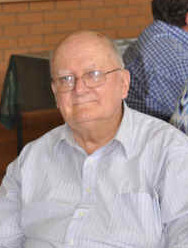 Reg has written over 20 historical publications and has dedicated countless hours to community service, genealogy and local history groups.  He is also a member of numerous genealogical, pioneer and historical societies.

He has received a number of awards including:

Reg was born on 12 February 1941 in the Stirling District Hospital to parents Oliver Charles and Ruby Olga (nee Nitschke) Butler.  His father was a grandson of Richard Butler, the founder of the then well-known Butler’s Doll and Umbrella Shop in the Adelaide Arcade.  His mother was a descendant of five of the founding families of Hahndorf, which could explain the considerable number of cousins that Reg seems to have locally.

In his early years Reg lived with his mother in a caravan or tent, variously at Springton, Loveday, Katarapko Creek and Woolenook Bend where his father supervised timber cutting gangs of civilian prisoners during WWII, after which his father established sawmills at Millewa and Paringa.

He attended primary schools at Millewa and Renmark followed by Renmark High School and then Adelaide Boys High School for his secondary schooling. Tertiary studies at Adelaide Teachers College (Diploma Teaching (Sec) and Adelaide University (Bachelor Arts 1963) enabled Reg to commence an English and History teaching career.  He spent about half of his teaching life at Nuriootpa High School followed by postings at other schools around Adelaide.

In 1979 Reg purpose-built a building adjacent to his residence in Hahndorf to house his comprehensive library and research data regarding South Australian Genealogy, Land Titles and local history.  This building is ‘bursting at the seams’ with all the information it now contains.

He was appointed Education Officer for Hahndorf and the Adelaide Hills in 1991.  Amongst other functions, Reg produced historical information for Hahndorf teachers and school-children including walking tours around locations in Hahndorf which incorporated investigations and questionnaires designed to heighten the students interest in and knowledge of the historic town.

Reg accepted voluntary retirement from the SA Education Department in 1994 allowing him to concentrate on his main remaining interests which included completion of the Hahndorf Land Titles Database with computer accessibility at the Kaffeehaus, South Australian and Germanic Shipping Lists, Adelaide Hills Hotels and Publicans, and general genealogical investigations.

In recent years, Reg’s health has not been the best and he has considerably reduced his historical research.  However, he still enjoys listening to music (he was the organist at St Paul’s Anglican Church, Hahndorf for some time), reading both local and overseas newspapers and books which he is continuously adding to his impressive library, and keeping in touch with a wide circle of friends and relatives having regular luncheons with a number of them.  Reg never married.

A considerable amount of Reg’s unpublished work is now being incorporated within the Adelaide Hills LocalWiki (https://localwiki.org/adelaide-hills) so that it can be permanently retained.

[Above article complied by Tony Finnis for Hahndorf Village Voice #59]

Excerpt from "Who's Who in Genealogy & Heraldry", page 42, with additional material by Anni Luur Fox.(Nov 2004) 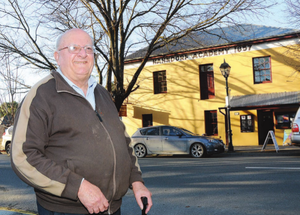 Hahndorf author and historian Reg Butler has been awarded an Order of Australia in the General Division (OAM) for his services to the community as an historian.History has always been one of Reg Butler’s great loves.  The Hahndorf local has written over 20 historical books documenting influential places and people from SA’s past and has dedicated countless hours to service with community, genealogy and local history groups.

He has been honored for his service to the community as an historian with an Order of Australia in the General Division (OAM) in Monday’s Queen’s Birthday Honors List.  The accolade came as a surprise for the avid researcher, as he did not know he had been nominated.  It recognises a life-long passion for history, particularly local history.

Mr Butler was inspired by the stories told by his grandmother Selma Nitschke (nee Wuttke) about life in the early days of Hahndorf ’s settlement.  “She lived here in Hahndorf all her life and she remembered people so well,” he said.  “She was interested in how Hahndorf and how those other Hills towns developed because she lived through it all.”  Mrs Nitschke shared those stories with Mr Butler, who has documented Hahndorf ’s history and that of several of its settler families in his books.  “I used to like hearing different people talk and telling me stories,” he said.  “It was only later when I happened to organise those stories into something more meaningful in the way of books.”

Born in the Stirling Hospital, Mr Butler spent his early life in the Hills.  With his father as a corporal in the army who oversaw woodcutting gangs in SA’s WW2 internment camps, the family moved around the State including to Springton, Loveday and Kataraptko Creek near Loxton.

Mr Butler became a teacher and spent half of his career at Nuriootpa High School followed by postings at schools around Adelaide.

After retiring, he began researching in the Lands Titles Office.  “I became very good at identifying people simply by their surname and knowing which part of SA they came from,” Mr Butler said.  “I have researched all the 54 founding families of Hahndorf and I am a descendant of five of them.  “There are not too many regions in Australia that are as unique as Hahndorf.”

Likening history to a treasure hunt, Mr Butler said it was very rewarding.  “You pick at it and pick at it until at last you get the identity and idea of what a person was like or the answer to the particular question you have,” he said.  With more new people moving to the Hills, preserving the region’s history was vital, Mr Butler said.  “Newcomers to the Hills don’t know anything and often they don’t care so they feel deprived because they don’t know the rich history of this place,” he said.

Reg Butler's extensive computer files are being incorporated as appropriate within the Adelaide Hills LocalWiki with his permission.  These files not only concern Hahndorf and the Adelaide Hills area but also include information on Adelaide and South Australia in general.  Due to the extensive nature of this information and the reformatting required, this will take a number of years to complete, but the important information involved is well worth the effort.  Reg is to be congratulated on his dedication and extensive knowledge regarding historical and genealogical matters in compiling this information over a considerable number of years.