Was born on 4 February 1824 at Lochwinnoch, Renfrewshire, Scotland, the son of Rev. Dr Robert Smith, a Church of Scotland minister, and his wife Marjory, née Barr.  He was educated at the University of Glasgow and he worked in commerce before migrating to Melbourne in 1854 as a partner in Hamilton, Smith & Co.  The following year he came to Adelaide, and replaced George Elder in the mercantile and pastoral firm of Elder & Co.  In 1856 he married George Elder's sister Joanna, and in 1863 he and Thomas Elder became sole partners in Elder Smith & Co. 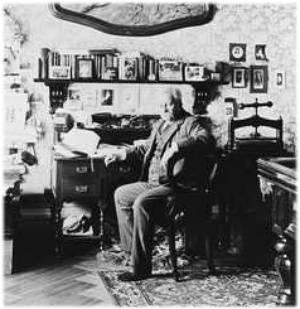 Robert Barr Smith in his study c 1907Their company pioneered the opening of outback South Australia, including the fencing of properties and sinking of bores for water.  The company also held pastoral leases in Queensland, New South Wales and Victoria.  In 1859 Elder Smith & Co financed the Wallaroo and Moonta Copper mines which, after some initial losses, brought large returns to the partners of the company.  Elder Smith & Co. also had interests in the Adelaide Steam-tug and Adelaide Steamship companies.  In 1882 Elder Smith & Co. was incorporated, with a nominal capital of £200,000 and Elder and Barr-Smith holding two-thirds of the shares, between them.  The next year they established a London office.  Barr-Smith was a major shareholder in Elder's Trustee and Executor Co., a spin off of the original firm, which was founded in 1910.  He was also director of the Beltana, Mutooroo, and Momba Pastoral companies, the Wallaroo and Moonta Mining and Smelting Co., the Adelaide Steamship Co., the South Australian Gas Co., the Mercantile Marine and Fire Insurance Co. of South Australia, the Australian Mutual Provident Society, the English Scottish and Australian Bank, the Mortgage Company of South Australia and the South Australian Co.  And as a sideline, he also helped to found the Bank of Adelaide. 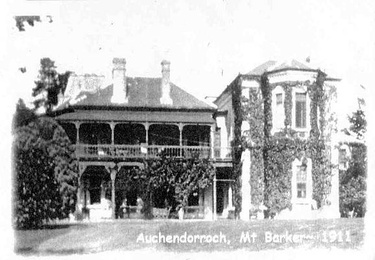 Auchendarroch - the summer residence of the Barr-Smith'sBarr-Smith's philanthropic activity became legendary.  A member of the Council of the University of Adelaide for nineteen years, his donations to the University totalled £21,400, including £9000 to the library which subsequently bore his name.  In 1900 he contributed £10,000 to the completion of the spires of St Peter's Cathedral.  He gave £2000 towards the establishment of the diocese of Willochra, and £2300 to pay off the debt on the Trades Hall in 1908.  He gave a number of pictures to the Art Gallery, defrayed the cost of an observatory at the summit of Mount Kosciusko for Clement Wragge, and donated a steam lifeboat to the South Australian government.  During World War I, he gave two ambulances for the front and offered his home, "Torrens Park" at Mitcham, for a military hospital.  This was much in keeping with his legacy, when during World War II and after, his former summer home "Auchendarroch" at Mt Barker became a convalescent home for service men and women, and later was used as 'Rest Home' for the aged and infirm.

Modest and unassuming by nature, Barr-Smith could not be persuaded into active politics, although he supported the free-trade advocates at the time of the founding of the Commonwealth.  Greatly respected, both by the business world and his friends, he was said to have refused a knighthood for services to the Colonies.  A keen patron of the turf, he often attended race meetings and bred and raced his own horses.  He died of senile decay at his residence in Angas Street, Adelaide on 20 November 1915.  His estate was sworn for probate at £1,799,500, the largest in South Australia up until that time; of this, more than £40,000 was left to charities.  His funeral, though a private one, was attended by the Premier, representatives from Adelaide University, prominent citizens, and leaders of Adelaide society.  He was survived by his wife, three of his seven daughters and one of his six sons.

The following are some of his descendants: