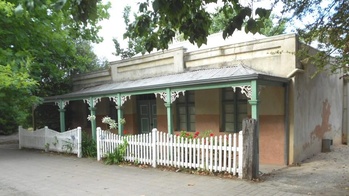 Heritage NR:  20498
State Heritage ID: 21250 -  This is the most significant surviving farm group on the Hahndorf main street, and one of only two complete farm groups left in the town which is the most intact German settlement in Australia.  It displays early German vernacular design and construction techniques, including pioneer stonework and uncommon examples of timber-slab construction and a tunnel-shaped bake-oven (Mount Barker Heritage Survey 2004)

This property is Australia's oldest intact German Farm complex and was worked as a hufe (small farm holding) until the 1920s.  The pioneer cottage, separate kitchen with corbelled bake-oven, pigsty, well and red gum barn were built over several years on the Widow Schmidt's wheat field soon after 1839.  The main house dates from 1854.  The structures on this site tell a story of immigrants' efforts to build a new life in a foreign land using ancient traditions.

The complex had been in the Rodert family from the turn of the century.  In 1901 Anna Amalie Nathanial Rodert, wife of Johanna Julius Carl Rodert, labourer of Hahndorf, purchased the property from Gottlieb Fischer.  Anni Luur Fox is the current owner and is in the process of restoring the property.

The Schmidt-Rodert SA Heritage site will not be gentrified or open to the general public.  It is merely being repaired and can be viewed from St Paul’s Lutheran Heritage Walkway opposite Otto’s Bakery.

By Anni Luur Fox - (current owner of the property) 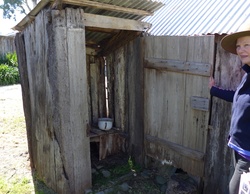 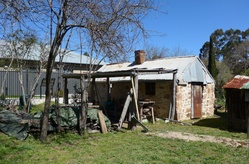 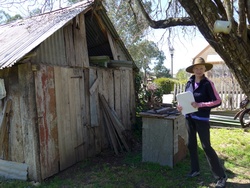 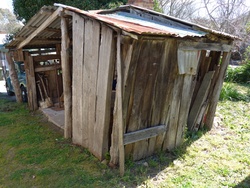 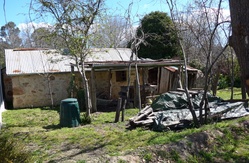 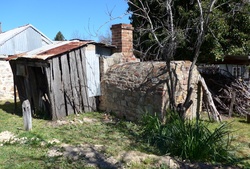 Twenty Main Street became the Widow Schmidt’s wheatfield soon after she arrived with her family in the Zebra in December 1838.  Her husband expired upon landing at Port Adelaide leaving her at fifty years of age to marshal her two sons and two daughters to carry the family possessions on foot to Hahndorf to establish a farm.  They were allotted a homestead block in South Lane, now English Street (formerly Billygoat Lane), as well as several cultivation blocks within the village boundary.  The wheat-field soon had a red gum barn built in the north eastern corner and a small wattle and daub hut nearby which was extended into an L- shape in stone as time allowed.  Gradually the property was developed by members of the Schmidt family into a small mixed farm with a red gum toilet next to the pigsty, poultry runs, vineyard and orchard.

Gordon Young’s Hahndorf Survey of 1979–81 conducted with a grant from the Australian Heritage Commission, marked Rodert’s Farmlet as a significant historical site.  With the Gallasch property in Victoria Street, it was the oldest intact early German farm complex in Australia.  Since then, two Gallasch cottages have been restored by the Gare Family, but some of the out-buildings have been lost.  Rodert’s farmlet is still intact but in urgent need of further conservation.  In 1991, my family began the long process aided by a conservation study by Lothar Brasse part-funded by the S.A. Department of Environment and Planning.

Construction of the first section of the stone house behind the picket fence by the roadway has been attributed to Friedrich Franz, a master mason who became the owner in 1858.  The Schmidt family had sold the farm to the wheelwright Ludwig Stark in 1853 and had followed Pastor Kavel to the Barossa Valley.  Mr. Stark was a land speculator who rearranged the boundaries and may have initiated the construction of the roadside house before bankruptcy forced him to sell.

As our family removed mouldy plaster and cement, we discovered that the house was built as one large room, possibly for use as a shop, with a stone lean-to at the rear.  Two internal walls were added later to make a central “Flur Kuche” or “Hall Kitchen” with an open cooking hearth and bake-oven.  This was a mark of Germanic origin.  Similar kitchen designs have been found in Franconian houses developed over several centuries throughout central Europe.  All signs of this cooking area directly behind the double doors, were removed after the horticulturalist, Gottlieb Fischer became the owner in 1874 and began extensive renovations in keeping with his ambitions.  He and his family also laid out the side garden in the Victorian style popular in that period, complete with palm tree.  The prickly hawthorn hedge and pickets were a means of keeping out straying animals.  In 1901 the farmlet came into the Rodert family when Natalie Fischer married Julius Carl Rodert.

On the slope behind the roadside house stand a red gum barn, toilet and pigsty.  They await further conservation with the small stone cottage of four rooms, outdoor kitchen and corbelled brick bake-oven that form this early German farm complex dating to the 1840’s.  In developing the site, the Widow Schmidt’s children had been wise to dig the well near the bottom of the slope, below their cottage, so that any overflow would water the garden in a natural dip in the ground near the road.  I suspect it must have been the village duck pond in winter, until Mr Franz built his roadside stone house on top of it.  This awful truth hit us one day when water flowed like a river through the house minus its rotted floors during restoration.  We thanked God for electric pumps and then rushed around digging drains and photographing apples floating past the telephone.

There are other hazards that add to the charm of this place, apart from the possums that chewed through heavy electrical conduit to squeeze into the loft.  Judging by the heights of doors, Mr. Franz must have been very short.  Our family of giants rapidly learned to duck after a few bloody connections of skulls with historic lintels.  Having been in love with Morris Minors for many years, we were well versed in the human body’s capacity to concertina.  In the end, a little discomfort for friends and family was considered preferable to belting hell out of the 19th Century interior.  We did, however, baulk at using the bucket in the red gum privy next to the pigsty and rejoiced mightily when a sewer, bathroom and flushing toilet were connected in 1992.

‘Why bother?’ you may well have wondered as you walked over the road from Otto’s Bakery recently and spotted me working as a builder’s labourer repairing the front wall with Ian Thompson.  Behind this humble building, according to the Hahndorf Survey 1979-81, is the only intact early German farm site in Main Street.  Taking on the agonies of conservation is a result of my role as an office holder of the National Trust of SA.  The Hahndorf Branch was established to lobby for retention of the historic townscape in 1976.  My family bought this derelict site in 1991.  This project is merely a case of putting my muscles and savings where my mouth has been for 38 years. 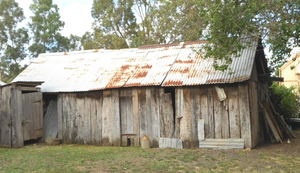 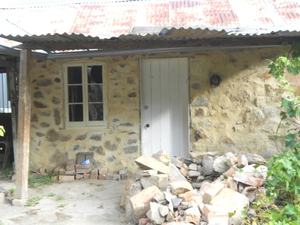 Hahndorf’s claim to national significance lies in being the first settlement in Australia planned for non-British immigrants.  In 1839 an ancient British and European system of land use had been jammed into two 80 acre sections and a third section added for extra cultivation purposes.  The Schmidt-Rodert farm has luckily escaped the usual cavalier removal of early buildings erected by Prussian farm workers using materials ‘at hand’ from the surrounding bush.  Apart from conducting repairs according to architect Lothar Brasse’s conservation studies, we have discovered construction techniques used by the first European owner, the Widow Schmidt and family, similar to those used by the ancient Britons, Germanic and Baltic tribes in pre-Christian Europe.

Gordon Young’s ‘HAHNDORF: A survey conducted for the Australian Heritage Commission, 1979-81’ has been a source of information regarding the historical significance of ‘Rodert’s farm complex’ on page 94 ...... ‘Behind the new house, which was built closer to the street pavement in the 1880s, lies an original two-roomed cottage of stone with a central chimney and loft.  There is also an outside bake oven, a slab-sided barn and pigsty.  They form a complete example of what must have been the standard farm complex built by the early settlers down the main street.  Incomplete remnants of similar buildings set quite well back from the street line exist but are now incorporated in more modern structures ........’

Information from The Hahndorf Allotments Database by Reg Butler 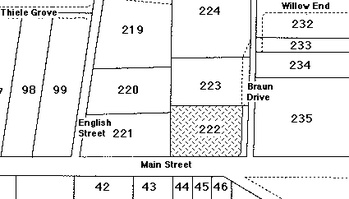