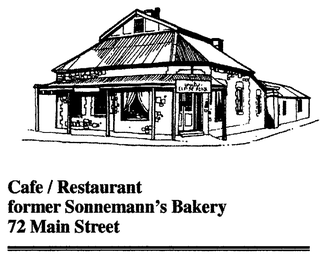 Sonnemann's Bakery was established in 1863, the first commercial bakery in the Adelaide Hills.  It had been in continuous operation in this building for about 100 years and supplied the district with traditional German cakes, as well as bread.  By the 1880s Franz Heinrich Sonnemann was advertising himself as a baker and grocer, licensed dealer in wine and spirits and manufacturer of jam and jelly.  The stone bakehouse at the rear of the shop still has its oven door in position.

The property remained in the Sonnemann family until 1923 when it was sold to Ernest George Perryman Smith who continued the bakery business.  His daughter, a Hahndorf resident, remembers that Streusel Kuchen (German coffee cake) cost 10 1/2 d per pound before the Second World War.  E.G.P. Smith continued to supply the district with traditional cake, as well as bread until he sold the property in 1960. 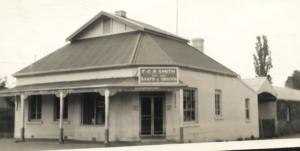 EGP Smith Bakery and Store (early 1930's)The first European settler on this site in 1839 was Samuel Steike with his wife Johanne Dorothea and four children aged two to fifteen years.  The Country Directory of 1844 listed the family farm as 3.5 acres growing three acres of wheat and half an acre of potatoes.  Their two pigs lived in a sty built on the homestead block but the twelve cattle had to be pastured outside the village.  The job of driving livestock to pasture fell to the youngsters of the family, a tradition that continued until the 1930's when herds of sheep and cattle passing through Hahndorf were still a common sight.  The Steike family was amongst several early settlers who soon looked for more land.

Cafe Assiette (2003)When the Steike family moved to Lobethal in 1853, Johann Stade became the owner.  In 1855 Stade sold the allotment to  Henry Collings which was subsequently purchased by the bookbinder, H.A. Unverzagt in 1859.  Franz Heinrich Sonnemann became the owner in 1863.

Johann Stade was a stonemason and it is believed that when he sold the property to Henry Collings the butcher, he had built the shop together with the family residence at the rear and the horse stables.  The bakehouse was added later, around 1863.

A bakery was in continuous operation in this building for about 100 years.  The founder of this bakery, Franz Sonnemann, had come to South Australia in 1857 at the age of 22.  He had worked for a baker in North Adelaide until he opened his own establishment in Hahndorf in 1861.  It was the first commercial bakery in the Adelaide Hills.  Bread carts drawn by magnificent Clydesdale horses serviced the surrounding townships and the growing tent city at the Echunga goldfields nearby.  By the 1880's he advertised himself as a baker and grocer, licensed dealer in wine and spirits, and manufacturer of jam and jelly.

Extract from Aldine History of SA  -  FRANCIS HENRY SONNEMANN  -  was born in Kniested, Hanover, Germany, in 1834.  After he served his time to the baking business he came to Adelaide in 1857, and remained three years, and eventually settled in Hahndorf and commenced his bakery and store; he also carries on a jam factory, cultivating his own fruit.  He was councillor for the district eleven years.  He married in 1859 Anna Jahns, of Germany, by whom he has six children. 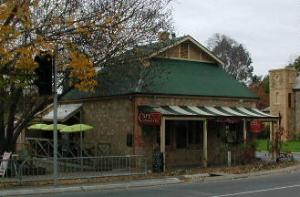 Cafe Assiette (2003)At midnight, Sonnemann's Bakery was always a magnet for boarders at the Hahndorf Academy.  Their dormitories overlooked the three buildings at No.72, the bakery, the shop with family residence at the rear, stables for the horses and a separate bakery building with an enormous oven that took up one wall.  The original oven was in what is now the kitchen of the house, however, Mr Sonnermann had built the big oven sometime later.  The boys used to slide down the Academy's balcony posts to sneak over Balhannah Road that separated the school from the source of delicious smells.  Having helped to mix the dough in huge wooden troughs, they were rewarded with cups of hot coffee and slabs of Kuchen (cake) fresh from the oven. 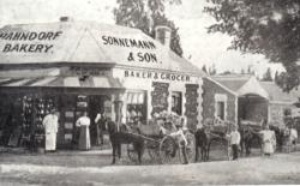 Sonnemann's Bakery (c1913) A keen sportsman, Franz became a foundation member of the popular Hahndorf Rifle Club in July 1864.  The club followed a German tradition dating to the 14th Century when they set up Hahndorf's shooting festival or 'Schuetzenfest' celebrated annually on 28 December.  In Europe, only the privileged classes owned lands suitable for hunting.  Because the rest of the population was banned from such pursuits, the people developed a different type of sport, a form of competitive target shooting accompanied by much feasting and drinking by the whole community.  The winner of the annual Hahndorf Kingship Shoot was crowned with an oakleaf garland and girthed with a belt of silver medals.  Each King had the honour of attaching a medal of his own design and inscription.  Starting in 1964, the South Australian German Association held its own 'Schuetzenfest' festival on the Hahndorf Oval, however due to its popularity as a tourist attraction, this is now held in Adelaide.

Franz Sonnemann represented the village as a member of the Onkaparinga District Council for seventeen years and was chairman for four years.  He became a Justice of the Peace in 1886.  As a member of Council he had the honour of planting the first tree on 19 August 1885 when the whole village turned out to help schoolchildren plant Hahndorf's two kilometre avenue of trees.  The distribution of substantial amounts of cake by Mrs Anna Sonnemann impressed the day deeply into the minds of the students who could still recite the details in old age. 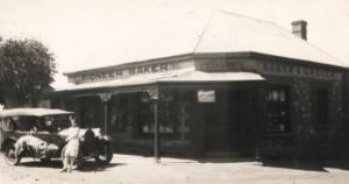 Pioneer Bakery (c1925)Anna and Franz Sonnemann diversified their business by purchasing a brandy distillery set up in 1876 by Christian Herzog at 91 Main street.  When the Distillation Act of 1881 killed off this industry, Franz was heard to mutter, 'The government has again murdered another goose that laid them golden eggs'.  A third of their jam factory on this site was demolished when the boiler blew up.  Franz had also invested in local gold mining and had gone on a prospecting trip in search of asbestos.  Gold mining brought heavy losses.  The three Sonnemann boys learned the baking trade from their father and worked in the family business for various periods.  In the German tradition, the three daughters also contributed to the business.  Their mother Anna retired eighteen months before she died aged 86 years.

In August 1923, the bakery with its attached general store was sold to 'EGP Smith' (Ernest George Perryman Smith).

Gwen Tunnah (nee Smith) remembers her father carrying on the bakery tradition until 1960, baking bread, cakes, rusks, pies, pasties etc.  The business also sold groceries, hardware, nails, slabs of leather for mending families' boots, picks, spades and axes.  Also sold was chaff, bran, pollard and wheat by the bushell, kerosene by the gallon, and as there was no chemist in the town all chemist lines were sold. Drapery lines were sold and there even was a chest for poisons.  There were 5 horses kept for the bread deliveries and 4 carts, which were loaded each morning 5 days a week to deliver 500 loaves (4 pence a loaf) each day with any grocery orders.  The flour came from Adelaide or Murray Bridge by rail to the nearby Ambleside Station, then by Mr Paech's horse and waggon delivered to the bakehouse.  In the yard was a well of pure spring water that was pumped by hand into a trough for the horses to drink and also used in the bakery.  The bread was all made by hand in large wooden troughs.  Lighting was either kerosene or carbide lamps.  The bake oven was heated by firewood which was kept outside the building. 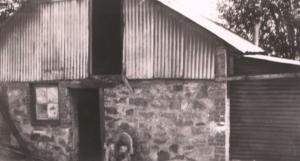 Part Original Cottage (before demolition, debris filled well)Opposite the bakery was the Post Office, the mail came by rail to the Ambleside Station and was then delivered by Mr Martin with his horse and coach to the Post Office.  The coach also took passengers to and from the train.  The Post Office was closed for 1 hour each day while the mail was sorted.

E.G.P. Smith added the additional structure to the top of the bakery roof at this time as the existing roof well leaked badly when it rained. 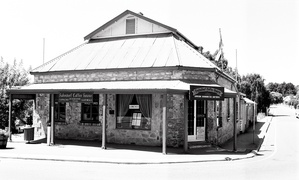 Hahndorf Coffee HouseThere were few physical changes until the 1970's when the three original buildings were utilised as restaurants and the grounds developed with additional structures.  A yew hedge was felled.  Next door, Schroeder's Cottage and cellars tucked into the banks of the creek disappeared under land-fill when the petrol station and shops replaced this unusual home and storage place for Rebensberg wines during the 19th Century.  The spring water well was also filled in with demolition debris from the the old buildings at this time.

In 2000 a new restaurant was added to motel rooms attached to the old stable at 72 Main Street.   Foundations of an earlier building were discovered during earthworks near the main street footpath. 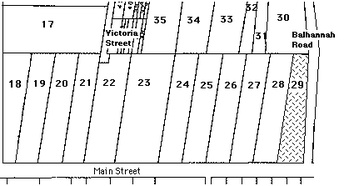