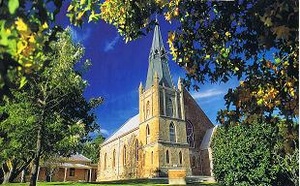 The first St Paul's Church erected in 1858 is still standing in Windsor Avenue.

The present St Paul's Lutheran Church, with its distinctive 20-metre belltower, was built in 1890 to commemorate the 50th Anniversary of the first Lutheran church in Australia and because of it's prominent position on the Main Street and traditional 19th Century architecture, has become a landmark to local residents.  It was designed by well-known Adelaide architect F.W. Dancker, and built by D. Both of Eudunda, at a cost of £1,260.  The stone was carted from behind the Verdun Hotel, and the belltower was imported from Germany.

This predominantly Gothic-style church replaced a former (1858) St Paul's Church erected in Windsor Avenue. The original St Paul's Church was located on Windsor Avenue and is now the Louise Flierl Mission Museum, honouring the memory of those who completed missionary work in Papua New Guinea and South East Asia.  St Paul's has been an integral part of Hahndorf's history since 1839, establishing and maintaining a ministry of care for its congregation and the wider community.

In 1970 St Paul's built sixteen independent living units known as St Paul's Court on Windsor Avenue.  Following soon after, another eight units were built on Windsor Avenue (Fischer Court) and twelve units on Church Street (Kavel Court), and in the 1990's St Paul's built a facility to house forth low care hostel beds on Braun Drive.  To continue the mission to service the elderly in the community ten serviced units were added to the facilities available, and in 2002 a twenty unit cottage was constructed to service clients with dementia and offer a comprehensive range of care for specific needs.

St Paul's hopes to continue to expand the provision of services for the elderly in our community.  St Paul's also offers a variety of friendship groups with the aim of meeting various age related needs.

After Pastor Kavel and Fritschke’s disagreement split Hahndorf Lutheran Congregation in 1846, the thirty families remaining faithful to Kavel worshipped in the manse diagonally opposite the church in Balhannah Road.  Although Kavel had left Klemzig that year to live at Langmeil in the Barossa Valley, he regularly made the long journey on horseback to visit his Hahndorf congregation.  By 1855, twenty- three families had left the village to be closer to him in the Barossa where they founded Nain and Gruenberg.  The families who remained faithful to Kavel but chose to remain in Hahndorf, held their church services at No. 2 Main Street.  They built the first St. Paul’s Lutheran Church of brick in Windsor Avenue in 1858.

Hahndorf’s early settlers came from Prussia where autocratic leaders of the feudal society had forbidden dissent.  In South Australia founded by dissenters, they were suddenly faced with freedom to worship as they pleased and later, the need to reconcile the diverse practices of Lutherans emigrating from other parts of the federation of German states.  It took some years before stability was gained.  In the 1850’s, a third Lutheran congregation, St. John’s, was formed by Pastor Kappler.  This congregation dedicated its brick church on Christmas Day in 1857.  Until it was demolished some forty years later, it stood behind the present St. Paul’s manse in Main Street.

By 1865 St. Paul’s and St. John’s had merged to form a single congregation in the care of Pastor Fiedler which in turn, united with St. Michael’s in 1874.  This lasted barely a year.  St. Paul’s regrouped in 1875.  After 1885 when Pastor Braun ushered in a long period of stability, the congregation decided to erect a beautiful new church in the main street.  Designed by F.W. Dancker of Adelaide and built by D. Both of Eudunda, the new St. Paul’s was dedicated on 14 September 1890.  The total cost was $2,520.80.

Early photographs of this elegant new church show a small Primitive Methodist Church next door.  Erected in 1862, it was abandoned a decade later when the task of establishing an English-speaking congregation in a German stronghold proved too daunting.  After many years of use as a convenient shelter by travellers, this building was demolished.  During an interview with Ossie Faehrmann who lived next door in 1975, he told me that groups of Aboriginal people would shelter within its walls on their way from the Murray River and Encounter Bay to visit Pastor Strempel’s wife at St. Michael’s, her sister Mrs Liebelt and their widowed mother Mrs Meyer.  Pastor and Mrs Meyer had earned their respect and affection during their years as missionaries.  Ossie also talked with pride of his father, Johann Friedrich Wilhem Faehrmann carting stone used for building St. Paul’s Lutheran Church from behind the Stanley Bridge Hotel at Verdun.  His  trusty team of horses was a magnificent sight transporting huge eucalypt logs to Port Adelaide for building the wharves.

The first St.Paul’s Lutheran Church of 1858 has found a new use as an exhibition space for a wonderful collection of artefacts from New Guinea.  Pastor Braun’s home opposite the St. Paul’s Church in Main Street is being carefully restored at the time of writing.  And Pastor Fiedler’s old home on the corner of English and Main Street now houses a fish and chips shop.

During the 1990’s, the congregation built a new hall and began a program of expanding its homes for the aged.  With St. Michael’s it had become a member of the Lutheran Church of Australia in 1966.  They joined forces in 1989 to celebrate the 150th Anniversary of the Lutheran Church in Hahndorf which had given birth to the village and the two congregations that survived to continue their work in the community. 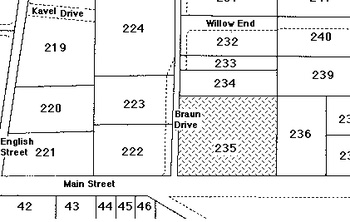