(Allan Campbell - Curator of The Cedars)

The sixty hectare property with its gracious old home and artist's studio has now been open for full time visitation by the public for over fifteen years.   Its uniqueness lies in the fact that it remains so wonderfully undisturbed, this being the third generation of Heysen family to own and maintain the property.   The famous chalet style studio has recently been identified as the nation's oldest surviving purpose built artist's studio (1912), while the homestead as viewed today has virtually remained unchanged since the 1920's. It has a grace and charm that speaks of the style of a bygone era.   The remodeling and enlarging of the 1870's residence after Heysen purchased it in 1912 transformed it from a typical Victorian villa into a more spacious and comfortable Federation bungalow.   Under professional direction over two distinct periods, 1912 and 1924, the house was altered and extended in acknowledged respect to British Arts and Crafts architecture. 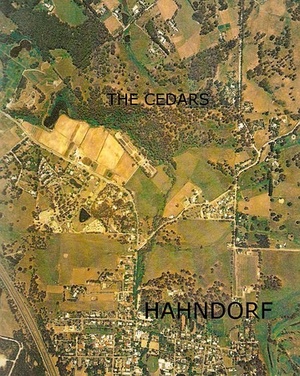 Aerial view of The Cedars.The comprehensive collection of Heysen's work hanging on the walls of every room complement the fine collection of antique furniture, Persian carpets, rare books and oriental artifacts that speak of a keen artistic eye for aesthetically beautiful pieces.   The partnership of Hans and Sallie Heysen was one of the most successful unions that the art world has ever known and the stylish interior of the home remains as a fitting tribute to them both.   Certainly it is a great credit to the Heysen family that their own philosophy is one of sharing this treasure with the nation as it could well have been kept secreted as sacred family ground only.   The family are wisely taking a more practical approach as, still being totally privately owned, it is ineligible for any funding support, and due to the ever increasing demands of an ageing property, they have opened in order, hopefully, to make the estate more self supporting.   The residence therefore is hung with the family's private collection of the famous artist's oils, watercolours, pastels, charcoals, and etchings, clearly conveying Hans Heysen's incredible versatility in both subject and medium.

Increased effort has been channeled into the restoration of the garden which Heysen himself laid out, and a number of years ago the studio of his artist daughter, Nora Heysen, was fully restored and opened for viewing.   The Artist's Walk on the property locates eleven of Heysen's favoured painting spots, and indeed some of the oldest gums in the Adelaide Hills remain on The Cedars (between three and five hundred years of age) due to his dedicated conservation philosophy of continually buying out neighbouring farms to protect his beloved gums.

As an artist Hans Heysen was instrumental in directing the way in which we came to view the landscape of our own country.   His distinctive paintings of the Australian gum tree served to implant this image securely into the national consciousness.   Heysen observed and recorded nature acutely and in doing so set into place his unique status as one of the nation's most popular and respected painters.

2012 marks the Centenary of the Heysen Family’s ownership of The Cedars at Hahndorf.  Hans Heysen purchased the property in 1912 as a direct result of a highly successful exhibition of his work in Melbourne. 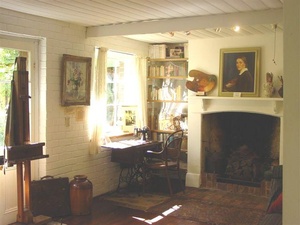 A Corner of Nora Heysen's StudioAt this time, Hans and Sallie Heysen were already residing in Hahndorf having in 1908 negotiated a four year lease on a cottage in English Street (then called Billygoat Lane).  They had long admired the property knows as The Cedars as they frequently passed it on route to the Ambleside Railway siding.

Currently, it was under the ownership of Ernest Jackson, a prosperous Adelaide butcher who had purchased it in 1910, though the house itself had been built in the late 1870’s by Alfred Wheelwright as a gentleman’s country residence.   The Whinnerah family then owned The Cedars for many years eventually leasing it to Joseph Rundle.  Hans Heysen maintained a persistent campaign to convince the reluctant Jackson to sell the property to him - and so in the end the artist wore the butcher down and Jackson agreed - his price being £1500 for the residence and surrounding 36 acres. 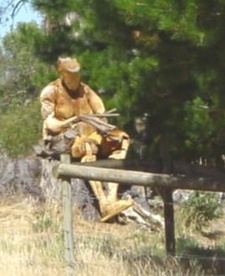 Hans Heysen SketchingAs both his family and his artistic success grew, Hans Heysen was able over the next ten years to renovate and enlarge the residence, converting it from a compact
Victorian villa to a more spacious twenty room Federation Arts and Crafts bungalow.  The year 1919 saw major work carried out to the house internally enlarging rooms and enclosing the verandas.  In 1924 a double storied extension was added to the house primarily to provide bedrooms for the children (now numbering eight in all).  In 1938 Heysen bought out the two neighbouring properties bringing the total acreage up to 150 acres.  This was done purely for reasons of conservation to protect the artist’s beloved gums.  To this day some of the oldest gums of the district still grow on The Cedars, two, in fact, reputedly five hundred years old.

The Heysen grandchildren who currently own the property have vowed never to sell it, in respect to their grandfather’s conservation philosophy.  The Cedars is still privately owned by the Heysen Family and very much in use as a family home.  The estate was opened to the Nation in 1994 and continues to gain status recognition as one of the most intact and best preserved historic homes in Australia.  The Heysen Family is currently setting Trust plans into place for a Foundation framework to provide necessary support for the estate.

In the words of Heysen’s biographer, Colin Thiele:   ‘Come what changes may, this patch of Hahndorf stays forever Heysen’

A little bit of recent “Royal” frippery at The Cedars!

Maybe of interest to readers of the Village Voice is that Hahndorf had a royal visit.  The Governor and his wife brought Prince Edward, Duke of Kent, to The Cedars (apparently at his request) to spend an hour looking through the Heysen studios and residence.  There are , of course, quite a number of Heysen originals in the Royal Collection at Buckingham Palace in London, as many of the visiting royals were presented with a painting by Sir Hans as a memento of their visit to Australia.  The Duke was most interested to know that a study in pastel of Old Man Collins of English Street was given as a gift to his grandmother, Queen Mary, by Dame Nellie Melba ..... he was inspecting a small exhibition of Heysen's drawings in the main studio of William Collins, who was a favoured subject of Hans Heysen as they lived opposite one another in English Street for the four years that the Heysen Family resided in the village itself.  The artist paid Collins the princely sum of one shilling to model for him!
After leaving The Cedars, the vice regal party took their royal visitor up to The Lane for a wine tasting!

Another Historic First for Hahndorf !  -  Did you know that Hahndorf, as well as being recognized as Australia’s oldest German settlement, is also home to the Nation’s oldest surviving artists studio? 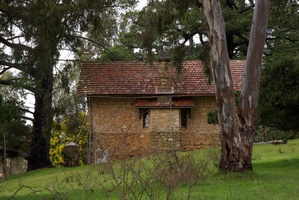 Sir Hans Heysen's StudioHans Heysen’s working studio at The Cedars, completed in 1913, represents the country’s oldest purpose built artist’s studio which is open to the public.  2013, therefore, is the Centenary Year for this significant building as well as marking the Centenary of the Heysen Family’s ownership of The Cedars itself.

The studio was architecturally designed by Albert Conrad who in partnership with his brother established a very successful practice operating from offices in the Adelaide Steamship Company in Currie Street.  Conrad and Conrad were largely associated with designing ecclesiastical and scholastic institutions throughout the State and were identified with the introduction of new methods and a wave of modern development which manifested itself in the State during this period.  Albert was one of the “new breed” of architects who were born and articled in the colony rather than in Britain. 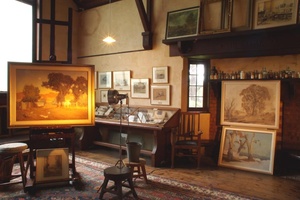 Conrad erected a large number of buildings which contributed permanently towards the beautification of Adelaide.  Among his most notable works are the Waterfall Gully Kiosk, West’s Coffee Palace in Hindley Street and the Archbishop’s Residence at Glen Osmond.  He had a strong affinity with the Federation Arts and Crafts Style and a tendency to use similar materials and building techniques, as can be seen in the Heysen Studio at Hahndorf.  After plans were drawn up in the latter part of 1912, tenders were called for in both the Advertiser and the Register.  The successful tenderer was William Pain, builder, of The Acacias at Hahndorf.  The white limestone was cut from the Verdun quarries and the bluestone for the foundation walling from the Hahndorf quarry.  The terracotta tiles for the roof were shipped in from Marseilles, France and the large opaque glass windows brought in from Britain to be positioned into their southern elevation.  The cost was four hundred pounds, a sizeable investment, but necessary to create the studio surrounds which Hans Heysen knew was an acknowledged priority.

In the words of Colin Thiele, Heysen’s biographer ... “With delays and innovations, it wasn’t until the end of February, 1913 ... six months after the move from Billygoat Lane (English Street) ... that Hans was able to enter his new studio for the first time.  It must have been a heart-warming moment.  Here at last, he had everything just as he wanted it ... peace, solitude, graciousness, simplicity.  It was a gentle place; a studio with warmth of spirit ... high walls, clear natural light, friendly materials, quiet surrounds.  A studio that a landscape artist more than any other could lose his heart to.  A place where he could paint”.

The Heysen Studio is available for viewing 6 days a week and can be undertaken as a guided tour at set times daily or as a self-guided tour any time between 10:00am and 4:30pm.

Plans are in place for a Glorious Centenary Celebration at Hahndorf, Saturday, 5th October to Sunday, 13th October in recognition of the 100 year accreditation of the studio and of the Heysen Family’s ownership of this significant estate.  A special Exhibition will be set up in the studio featuring photographs, architectural plans, correspondence and working drawings ... not only of the studio but also the residence itself which was transformed from an 1870’s Victorian villa to a spacious Federation Arts and Crafts bungalow (1919-1924) and home to this famous family for three generations.