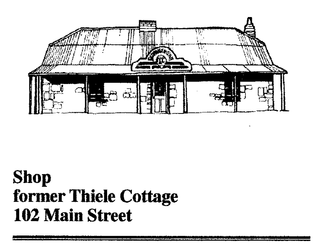 The young couple who originally built this cottage in 1845 are believed to have been the first couple to marry in Hahndorf.   They were Johann Friedrich Thiele, son of Hahndorf pioneer Samuel Thiele, and Anna Dorothea nee Schmidt.

Because there was no church at the time, they were married under a gum tree in the main street in 1839.  Family history suggests that this tree was later felled to provide timber for the woodwork in the house.  The cottage is a typical German design with half-hipped roof and loft area.  The buildings at the rear were erected after 1989.

Johann and his wife lived here until their death, but the property stayed in the Thiele family until the 1950's. 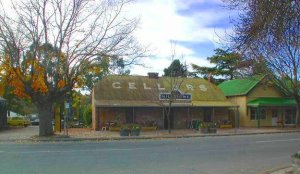 Hillstow Wines 2002Sitting in Andrew Thiele's kitchen next door at No. 100, I heard a romantic family story about Anna Dorothea Schmidt marrying the shoemaker Johann Friedrich Thiele under a huge 200 year-old red gum that sheltered this place.  Being the first couple to marry in the new village in 1839, their wedding feast was a little sparse, a boiled parrot or two with new potatoes dug from soil recently cleared of native bush.  The tree was felled to build their first home of slabs thatched with kangaroo grass.

Anna had come to South Australia as a single woman aged eighteen on the 'Prince George'.  At first, her father had refused permission for her emigration, but eventually he relented and allowed her to accompany his widowed sister, Anna Elizabeth Schulz, on this great adventure.  Twenty-six year-old Johann Friedrich (Hanfried) Thiele was on the same ship with his parents and brothers, working his way to Australia as a kitchenhand.  Whether this meeting with Anna was happenstance or clever planning is unknown.  The Thieles were amongst a number of families who decided to leave Klemzig to join the 'Zebra' passengers at Hahndorf.  Like the other settlers, they practised mixed farming.  Young Anna and Hanfried eventually produced four daughters and two sons and looked after the Widow Schulz until she died.

In 1975 when machines were digging up Hahndorf main street in preparation for laying sewage pipes, they uncovered the enormous roots of the red gum in front of this stone cottage.  The story was true after all!  While sketching the cottage I had noticed the date 1845 carved into the northern gable.  Inside, a giant slab of red gum served as a mantlepiece over the central hearth where meals used to be cooked over an open fire.  This had been standard practice until iron stoves became readily available later in the 19th Century.  Meat was roasted in front of the fire and pots of soup or stew were suspended in a cauldron over its flames.  Hams and sausages were hung to smoke up high in the chimney.  A separate corbelled brick oven in the backyard was fired up to bake the weekly supply of bread and cakes. 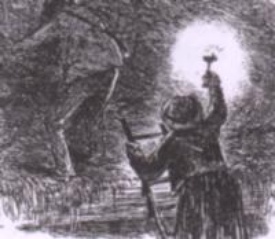 Imagine climbing up narrow wooden steps to bed in the loft by candlelight, careful not to set the straw alight. Besides supplying extra sleeping quarters, the loft was also a place to store apples wrapped in straw for the winter.  The roof of wooden shingles was covered with corrugated iron when this material became readily available in the 1860's.  Because of the high watertable that ensured much pumping out of cellars in Hahndorf's wet winters, Thiele's cottage has a half-cellar attached.  It may have been used as a dwelling until the main cottage was built in 1845.  Writing about her German grandparents in 'Chronicle Cameos', Mary Broughton described such semi-underground homes lined with cornsacks stitched together and brushed over with a lime solution.  The floor was a mixture of clay and lime called "marl."  Thiele's cellar has a flagstone floor, fireplace, shelves for storing produce and benches for making butter, cheese and cream.  Double doors leading to the farmyard ensured easy access.  A tiny window in the northern wall allowed villagers to place their boots inside on a shelf for repairs by Hanfried.  Greatly respected by the community, he became a Trustee and Elder of Hahndorf Lutheran Church and helped in its transition to become St. Michael's in 1858. 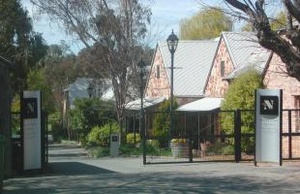 Nepenthe Wines 2004Having weathered the real estate boom of the 1970's reasonably intact, the farmlet was due for redevelopment in 1986.  The owners proposed to build a row of fifteen shops in various styles of architecture and a giant aviary housing 600 birds by the creek.  A street tree planted in 1885 and the wooden barn erected by Mr. Schubert in 1912 were to be removed.  One of few wooden structures still in existence, the barn was a tangible reminder of Hahndorf's farming heritage in Main Street.  After a decade of lobbying, the Hahndorf National Trust Branch was concerned that despite the hard won principles of development control in the Hahndorf Supplementary Development Plan, such important elements of the village streetscape were once again threatened.  A lengthy court case followed.  In 1989, Hahndorf's 150th Anniversary, the Planning Appeals Tribunal ruled against the development.

The new buildings behind Thiele's cottage represent the compromise that was ultimately reached between the developers and the South Australian Department of Environment and Planning.  During the 1990's Hillstowe Wines Pty Ltd took over the site, bringing back to Hahndorf an industry that had closed down a century earlier.  In 2004, the site became the head-office for Nepenthe Wines Pty Ltd.

Information from The Hahndorf Allotments Database by Reg Butler. 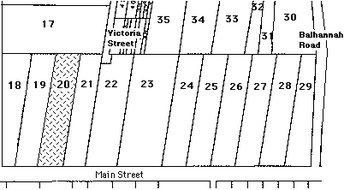