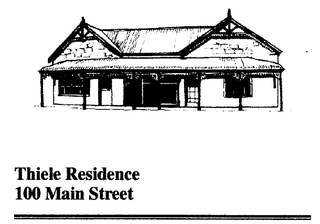 The late owner, Andrew Thiele, great grandson of Hahndorf pioneer, Samuel Thiele, was born in this house.  His father, J.O. Thiele, and his nine brothers and sisters were also born here.  Until late 1989 Andrew was the only descendant of a pioneer of Hahndorf still occupying the original block allotted to his ancestor in 1839.

The original two-roomed brick cottage that replaced Samuel Thiele's first hut is still upright under a hugh tree in the backyard.  J.O. Thiele opened a grocery and drapery business in the store section of the building at the turn of the century.  In 1912 he bought a Ford motor car which he used to hire out to local residents.  The only other car in Hahndorf at that time belonged to Dr. Auricht.  J.O. Thiele later operated a number of agencies on the premises as well as a florist shop, with many of the flowers grown on the property.

Extracts from 'Hahndorf - A Journey through the Village and its History', by Anni Luur Fox (2002)

Andrew Thiele, great grandson of Hahndorf pioneer Samuel Thiele, was born in this house, together with his father and nine brothers and sisters. 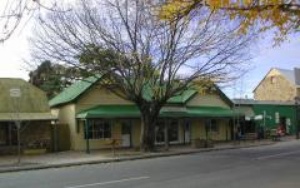 A grocery and drapery business was opened in the store section of the building by Mr J.O. Thiele at the turn of the century.   The shop and dwelling which were added to as each new Thiele was born, are still standing in good repair next to the Old Mill Restaurant.

Visitors to the town would buy the beautiful flowers grown by the Thieles and marvel at the appearance of the place, which had not changed since the days when J.O. was the proud owner of the second car in Hahndorf, and eventually of a whole fleet of automobiles which he used to hire out.

Apparently, it was like stepping into another century.  Strange 70 year-old children's boots still sat on the shelves along with a conglomeration of florist's equipment, old bottles, jars, wreath bases, and dried arrangements.  This is now all gone, however, the florist business was still carried on by Mr and Mrs Andrew Thiele for some time who also continued to grow their flowers and vegetables in a large area behind the shop.

In later years the property has been used for a number of businesses including antique shops, quilt-making supplies, 'arts and crafts' supplies shop and a second-hand goods charity shop. 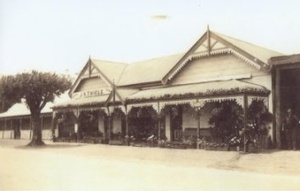 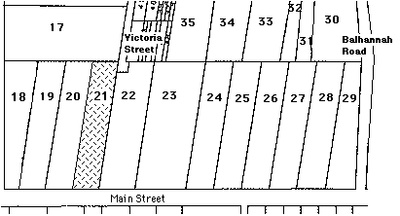